Advertising giant WPP has been rebranded, as it announces a major restructure for the company that will allegedly see it axe 3,500 jobs worldwide.

Some of its sub-brands include design giants Superunion and Landor, and advertising agencies Ogilvy and AKQA. Superunion itself is a merger, launched in January this year, of five former WPP-owned design studios, including The Partners, Lambie-Nairn and Brand Union.

A difficult year for WPP

The company has had a turbulent year, after previous CEO Martin Sorrell, who had held the reigns for over 30 years, stepped down in April, and Mark Read took over.

The company has since reported low levels of growth and a drop in share price and market value, though it is still the biggest marketing and advertising group in the world, taking in £15bn annually, according to The Guardian.

The rebrand, which has been completed by WPP consultancies Superunion and Landor, alongside WPP’s in-house creative team, signals a “change” in the company, says Greg Quinton, chief creative officer at Superunion, as it looks to increase its creative output.

It centres around a logo made up of many parts that combine together to form the company name, which aims to represent “WPP’s many people, companies, countries and clients who work together”, says Quinton.

The rebrand has been revealed on the same day as a new business strategy, which lays out WPP’s “vision” to become a “leader in creativity and technology”.

This will involve it focusing on four core areas of communications, experience, commerce and technology, and will see the company “dispose of under-performing businesses” it owns, and “close unsustainable operations”, according to WPP. “WPP has become too unwieldy with too much duplication,” the company adds.

It also says its remaining businesses will be “more integrated” and collaborative, and that WPP will look to cater better for clients.

This has been reinforced as the company has begun developing global campuses, with one opening in Prague, Czech Republic earlier this year. On these campuses, WPP agencies, design consultancies and businesses are based across a few buildings in the same location, with the aim of encouraging collaborative working and improving the experience and creative offering for clients.

As part of the restructure, WPP is also set to cut 3,500 jobs worldwide and shut or merge roughly 200 offices, according to The Guardian. This will allegedly be coupled with hiring 1,000 more creative staff, meaning net job losses would total 2,500.

A focus on “creativity”

The decision to hire more creative staff corresponds with WPP’s new business strategy, which looks to position the business as a “forward-thinking” company with “creativity and technology at its heart”.

The new WPP branding looks to reflect the “ever-changing” nature of the company, says Quinton, chief creative officer at Superunion, who was one of the design leads on the project.

The logo is made up of a grid which contains several, digital-inspired, circular pixels, which change in colour to create the letters “WPP”.

There is no core colour palette to the brand, which will change regularly to accommodate different combinations of primary and secondary colours, such as blue, green, purple and pink, and red, orange and yellow.

The new branding appears in static and animated form, with ripples appearing across the marque in moving versions, as the logo’s letters form and colours change.

Branding “represents the people who make up WPP”

It will appear across all touchpoints, including interior office signage, posters and print marketing materials, and online platforms such as the WPP website.

Quinton says the project, which was completed in a few months, has been a “collaborative” one between the three design teams at Superunion, Landor and WPP, which aims to represent WPP’s future purpose of encouraging creative communication between businesses.

“The main marque is created by the grid, which changes and reflects light when animated,” he says. “The colour transforms through each individual dot, which could represent the people who make up WPP, the different teams, and the way we work together.”

He adds that the main theme to the rebrand was “transformation”, which is signified by the “ever-changing” nature of the logo and its colour palette.

“The company is changing” 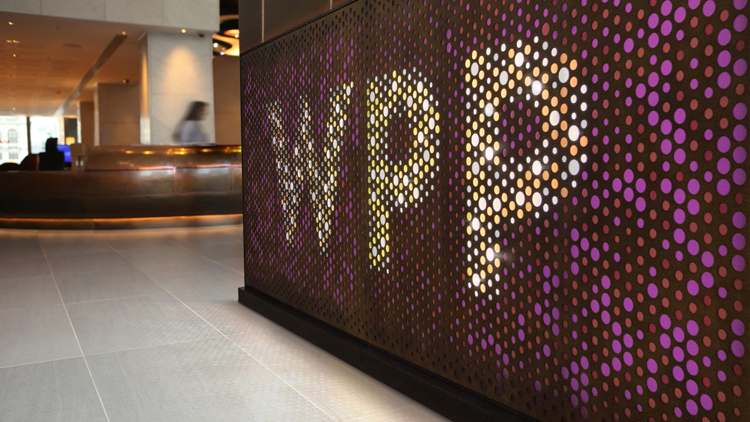 “We wanted to represent that WPP is changing and that these are exciting times,” says Quinton. “We brought a freshness and dynamic nature to the identity – there are no boundaries to the new brand.”

Quinton adds that the creative teams aim to create a coded version of the logo, which could be duplicated across multiple platforms in different colours and forms, to further express its “ever-changing” nature.

A new, bespoke, sans-serif typeface has been used for copy throughout the new identity, simply called WPP, which aims to be “clean and modern”, adds Quinton.

The new branding is currently rolling out across all touchpoints.