The six events highlighted are sailing cycling, athletics, gymnastics, rowing and swimming. Each sport is represented by geometric shapes and a colour, alongside a “graphic nod” to the Japanese flag’s rising sun. 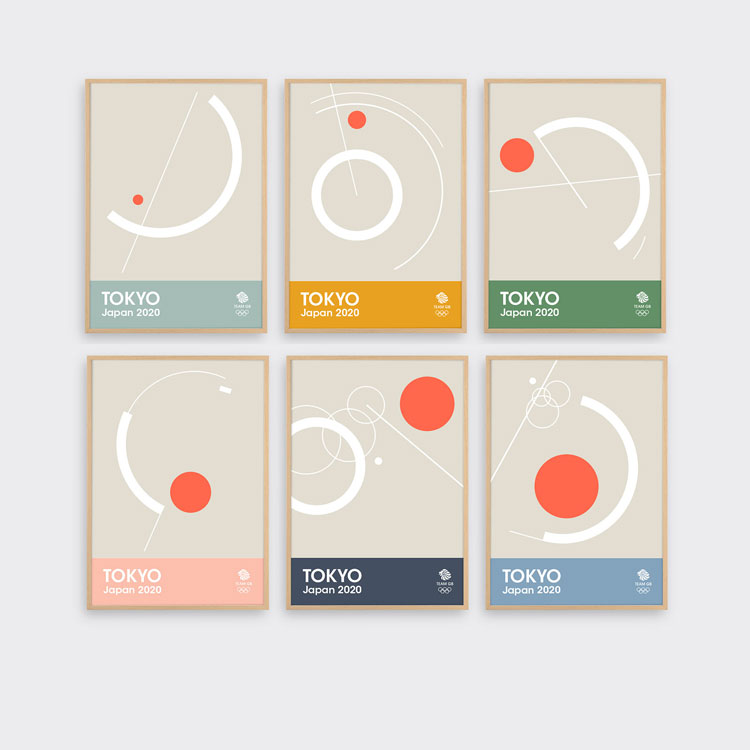 Kirsty Thomas, the studio’s creative director, tells Design Week: “We wanted to create a body of work that was playful, colourful and accessible but also subtle and considered.”

“We also wanted the prints to appeal not only to sports fans, but also to stand alone as design objects,” she adds.

The collaboration was initiated by Paul Ellis, head of licensing and retail at Team GB. The Olympics has a long history with graphic design; and 20 ‘art’ posters were commissioned for this year’s games last year.

“A timeless piece of design”

Thomas cites the Olympic posters of the 1960s and 70s as an inspiration. “There is something about the iconic typography and imagery of this era that really resonates with me – the type, the colour, the negative space,” she says.

In particular Thomas highlights the Tokyo 1964 poster as a “timeless piece of design”, focussing on the “simplicity and boldness” of Yusaku Kamekura’s work. The alignment between the Tokyo inspiration, and this year’s destination, was “handy”, Thomas adds.

Each poster features Team GB’s logo and the Olympic rings at the bottom.

Georges Huel’s and Pierre-Yves Pelletier’s work for the 1976 Montreal Olympics was a “particular influence” on Thomas’ use of type for the posters. She draws attention to the designers’ “beautiful exploration of simplicity and space”.

Thomas started the design process by “exploring the shapes and lines that the sports might create in photographs”. She sketched over photos, and from this, began to “develop a visual language of lines and shapes which could be used to express the movement of the athletes, apparatus or environment”.

The shapes that emerged from this process – “arches, circles, strong lines and softer curves” – could then represent the form of an athlete’s body, or the shape of a sail, or even “the motion of a rower’s oar as it hits the water and creates a trail of ripples”.

She has incorporated the “subtle nod to the red to of the Japanese flag into each print”. “It provides a counterbalance to the thinner, sparser white lines and creates continuity across the collection,” she says.

While some of the geometric patterns might not be immediately obvious, the posters’ colour palettes act as a clue as each shade relates to the sport being depicted. There is the green of track and field, the yellow from the velodrome and an aqua blue of the ocean and bright blue of the swimming pool.

“Colour is a really important in our work and finding a palette that was representative but harmonious was an essential part of the design process,” she adds.