Salad grown underground in a laboratory; proteins derived from soil mould; cheese grown from human bacteria; these are all perfectly edible foods, showcased as part of the Victoria and Albert (V&A)’s Bigger than the Plate exhibition.

The show, which recently opened at the London museum, delves into the future of food, looking at how, as consumers, we can make more sustainable and responsible culinary choices.

Split into four, curatorial sections – visible by a change in aesthetic as people pass through the space – of “compost”, “farming”, “trading” and “eating”, the exhibition takes visitors on a journey of the food cycle, from producing and reusing waste, to growing food, transporting it, to the final product being delivered as a meal.

Bigger than the Plate hopes to challenge people’s preconceptions of where their food comes from, how it is grown and what they are willing to eat, offering novel examples of less wasteful options. At the same time, it does not aim to preach to its visitors or sell certain lifestyle choices, says May Rosenthal Sloan, who co-curated the project alongside Catherine Flood.

“We are not didactically telling people what they should be eating, or telling people off for their choices,” Sloan says. “I hope people take away the scope for a better food future, and a sense of where they want to exist in that debate.”

The space has been designed by the V&A’s in-house team, and changes as visitors move through, reflecting the different topics.

Compost, which focuses on human and food waste and how it can be better used to aid biodiversity and sustainability, has a natural feel to it, using earthy colours such as peach and yellow. It features a huge, peach gauze curtain tracing visitors’ routes around the section, which looks to imitate human intestines, says Juri Nishi, senior exhibition designer at the V&A, and 3D designer for the show.

“The curtain relates to the idea of human digestion, and how we are all part of the ecological story of the future,” she says. “The curators have these strong messages about how eating is about personal consumption and having agency, so we’ve used tactility and the atmosphere of the space to reflect that.”

In keeping with the idea of consumers having control over their waste, featured projects include those that look at how individuals can contribute positively to the food cycle. Daily Dump is a project founded in Bangalore, India, which sees various hand-crafted terracotta pots and compost kits sold to the public to help them separate out their waste and use it to grow vegetables and other food through home-composting.

Farming looks at ways in which we can change how we grow and farm food. As this section focuses on human intervention, the space is much more “grid-based”, says Judith Brugger, senior graphic designer at the V&A and 2D designer for the show, reflecting the idea of manufacturing. 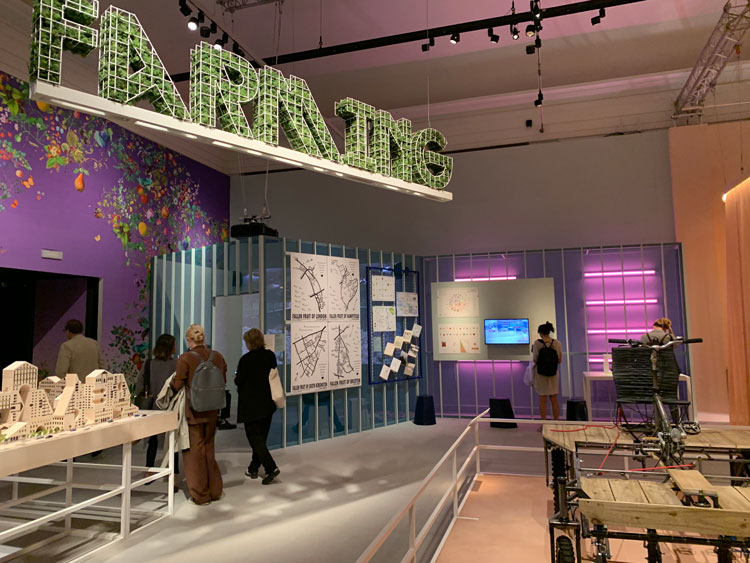 Projects look at how we can farm more sustainably and sensibly – the data-driven MIT Food Computer, for instance, can replicate natural conditions to grow crops in artificial environments, while Bicitractor is a pedal-powered tractor that could be used for small-scale farming.

While many of the featured exhibits are product and innovation focused, some are artistic expressions of the rich, farming history in the UK. Art collective Fallen Fruit has created a 12-metre squared wallpaper that visualises the V&A’s history of growing fruit trees. Whether proactive projects or purely visual, all the show’s pieces aim to establish the relationship between art, design and food, which Sloan describes as a “stubborn” subject.

“There is a trajectory of designers moving away from making stuff for an oversaturated market and towards making meaningful interventions in the world,” the co-curator says. “One of the most exciting things is the collaboration between designers working with scientists, artists with chefs and farmers, local communities with activists. Food is a stubborn subject that bleeds across disciplines and doesn’t fit into clear boxes.”

One project that shows the connection between art and science is the Planetary Community Chicken, by Belgian artist Koen Vanmechelen. He was concerned about how farmers have “designed” poultry over time, so that different countries have their own specific varieties, meaning gene pools have been narrowed. To make a statement about bio – and cultural – diversity, he initially bred a Belgian chicken with a French one on the border of the two countries.

Over 20 years, he then carried on doing this with birds from different countries, and the result is a huge, chicken family tree sprawled across one wall of the exhibition space, showing the variety of birds he has produced from cross-breeding.

“The scientific community started paying attention to what he was doing and realised the chickens he was producing were genetically diverse, disease-resistant, strong and beautiful birds,” says Sloan. “It’s a really amazing example of science following art. He has helped poultry farms all over the world to safeguard their futures by injecting genetic diversity into their stock. The project is both creative and playful, and really productive.” 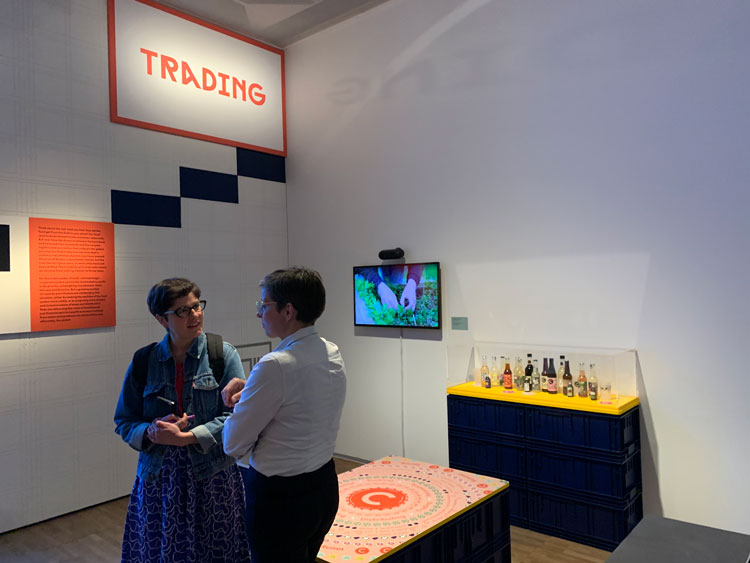 The aesthetic of the trading section has been inspired by the shape of crates used to carry and transport produce from farm to consumer, says 3D designer Nishi, with rectangular and square block shapes featuring across wall graphics and captions.

It explores how food is bought, sold, exported and marketed, with a strong focus on how graphic design and advertising has been used to promote food, questioning how genuine promotional campaigns are. One project with a critical eye is Supernatural, by Berlin-based artist Uli Westphal, which includes huge, composite images compiling multiple “idyllic” graphics taken from supermarket food packaging, making a statement about false advertising. 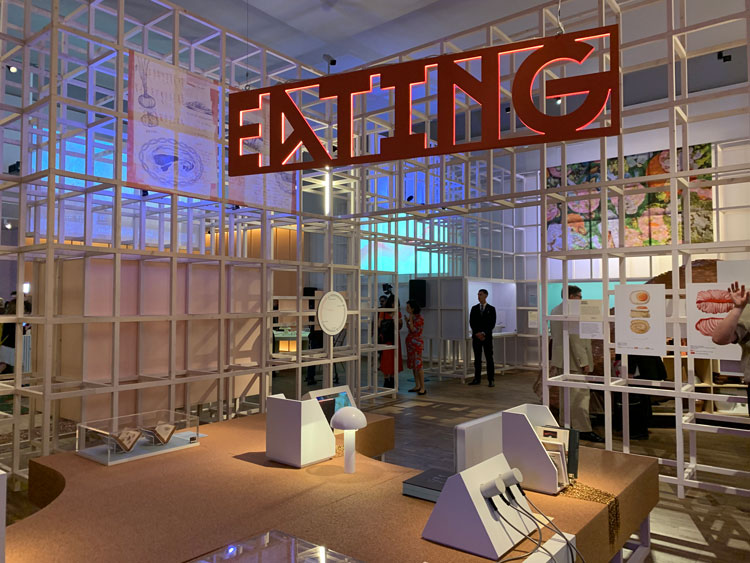 Finally, eating places the focus firmly back on the visitor by offering novel ways of consuming, and challenging preconceptions of what constitutes food. It also analyses the wider concept of group eating, looking at it as an activity that helps to form human relationships and inspire conversation and debate.

This is depicted through an 11-metre long dinner table displaying different projects, from cutlery designed for those with disabilities and reduced dexterity, to utensils formed into peculiar shapes, which explore how structure, shape and tactility can enhance the taste of food.

One of the show’s most shocking pieces challenges notions of what we are willing to eat — Selfmade, a selection of cheeses that have been cultured from human bacteria, including from celebrities such as chef Heston Blumenthal.

Perhaps the most interactive exhibit of the whole show is a live, food bar called the Loci Food Lab – where chefs and waiters serve visitors sustainable canapés of their choice, made from ingredients such as vegetables classed as “too ugly” for local supermarkets, dried and powdered fish, and salad grown underground in South London.

The show attempts to open visitors’ eyes to how we can all mitigate food waste, production and consumption, and fittingly, the design team has also thought about the waste produced by the exhibition itself. Large-scale, temporary shows such as Bigger than the Plate are notoriously wasteful, with a lot of production power and many materials invested only for it all to be ripped down months later.

To alleviate this problem, the team has committing to reusing materials after the show’s run is over, either in future V&A exhibitions with smaller budgets, or by donating them to schools, theatres and other museums — the mesh curtain used in the first section, for instance, could form part of a stage set, says 3D designer Nishi.

“Large-scale exhibitions can be difficult in terms of sustainability, as a lot of the art has been commissioned especially for the show,” she says. “We purposefully chose quality materials, so that we can donate materials for other uses.”

Equally, the team has tried to make sustainable choices with materials, says 2D designer Brugger — the graphic panels, used to hold captions throughout the show, have been made from two compostable materials; a bi-product of corn production, and recycled paper cups, made into printable paper by GF Smith.

To limit the carbon footprint of certain projects, co-curator Sloan adds that some of the international projects have been recreated in London studios, rather than shipped across the world, such as Daily Dump, the terracotta pot project based in Bangalore, India.

“The positives of this are twofold,” says Sloan. “It’s about sustainability, but also transfer of knowledge, skills and experience from India to the UK – we hope the project will now continue to be made by a London potter.”

And while Bigger than the Plate does not aim to tell people how or what to eat, she says, the hope is to make visitors more open-minded to what constitutes food and food production, and more aware of the options that could be available to them in future – without the need to compromise on taste.

“Food is something we all have a stake in – our food systems are changing,” says Sloan. “With the help of creative practitioners, we’ve tried to reimagine a food future that is more sustainable and biodiverse, but also more delicious, which is still so fundamentally important. I hope anyone who eats – which is all of us – can get excited, take things away, and feel more knowledgeable and better armed for the future.”

Food: Bigger than the Plate runs until 20 October 2019 at the Victoria and Albert Museum, Cromwell Road, Knightsbridge, London SW7 2RL. Tickets cost £17 and £13 for concessions.