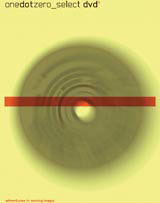 This May it’ll be seven years since the first Onedotzero digital film festival took place at the Institute of Contemporary Arts in London. While the first event felt like something that had fallen into a scheduler’s gap between events, Onedotzero7 will take in over 40 hours of work from around the globe in 24 different programmes interspersed with talks, features and live events.

In the intervening years the Onedotzero cavalcade has programmed and commissioned slots on Channel 4 and contributed to countless other screening events all over. And this year it’ll be launching Onedotzero_select, its first DVD compilation of digital shorts. ‘It’s like taking a piece of the festival home with you, extending the experience and distribution for the work,’ says festival director Shane Walter, a man who’s been there from the beginning, with the zeal of an evangelist.

Hovering in the background throughout the festival’s seven years there’s been the emergence of digital video from something that happened in the darkened cutting rooms and edit suites of Soho facility houses to something that could quite genuinely exist on the desktop of a straight-out-the-box Apple Mac.

The central focus of Onedotzero has always been on innovation and invention rather than on material that was being produced on digital formats (either DV cameras or desktop editing) as a cheaper alternative to broadcast media. ‘Onedotzero was started as a producing festival for non-traditional filmmakers from disciplines such as graphic design, illustration and new media,’ explains Walter.

Design and creativity have been at the forefront of the project since the outset – the founding programme included experimental pieces from Antirom and Chris Cunningham’s first music promo. The emergence of new technologies in the intervening years have broadened the scope of work submitted and selected with the result that short animated pieces produced by small creative teams can sit alongside big budget music videos in the programme. ‘I like to think that the focus on the digital aspect of filmmaking has now receded and we can once again concentrate on the content,’ says long-time contributor and image-maker Andy Martin.

The DVD release, timed to coincide with the festival, pulls together a selection of material from all seven years of Onedotzero and offers the best introduction to the ethos behind the project. Alongside Shynola’s computer animation The Littlest Robo – Shynola’s Richard Kenworthy’s graduation film from the Royal College of Art – you’ll find the Paris-based Pleix Collective music promo for electronic label Warp, an animated horror story, Full Moon safari, directed by Ben Hibon and 13 other shorts.

‘In the early festivals there was a sense of the artists exploring and experimenting with the tools and finding their voice and style in motion,’ Walter points out. ‘So there was much more material that was more abstract and musically driven.’ Other changes that can be seen across the years spanned by the DVD are reflected in how software development has affected the kind of work that can be produced.

‘Macromedia Flash had a big impact on motion graphics,’ says Onedotzero contributor Ed Holdsworth. ‘A lot of people using Flash for Web applications found they could make animations to broadcast quality using the same software, and they did.’ Allied to this, the development and cheap ‘availability of more powerful computers has encouraged software developers to move applications on to desktop systems that were not available before. That is going to generate a lot of interesting films,’ says Holdsworth.

In a nice piece of circularity, Onedotzero has itself acted as an inspiration for future contributors. Holdsworth, whose video Arrive, with music by Dom MinÃ³ is featured this year, decided to put a showreel of his abstract narrative visual forms together after seeing Onedottv on Channel 4 a few years ago. After all, this seemed to be saying, there is a place for more experimental work and in bringing together the practitioners and compiling a body of work, the festival has found that there is a large and enthusiastic audience out there.

There’s a book forthcoming that Walter is putting together with the first festival director Matt Hanson, who, despite having moved on to other projects, is still passionate about the event. ‘When Onedotzero started digital filmmaking was a revolutionary concept at the time. Now many of these ideas have become part of mainstream creative thinking,’ he says.

‘Onedotzero is great,’ echoes Airside’s Nat Hunter, whose video Nice Weather for Ducks, co-produced with Tandem Films for Lemon Jelly, features this year. ‘It highlights the fact that many graphic designers and illustrators have been involved in moving image for a while. The short film and pop promo is a perfect vehicle for a designer’s vision, and working for a band is a lot more free than working for a brand.’

Smutty guests may search around in their drawers