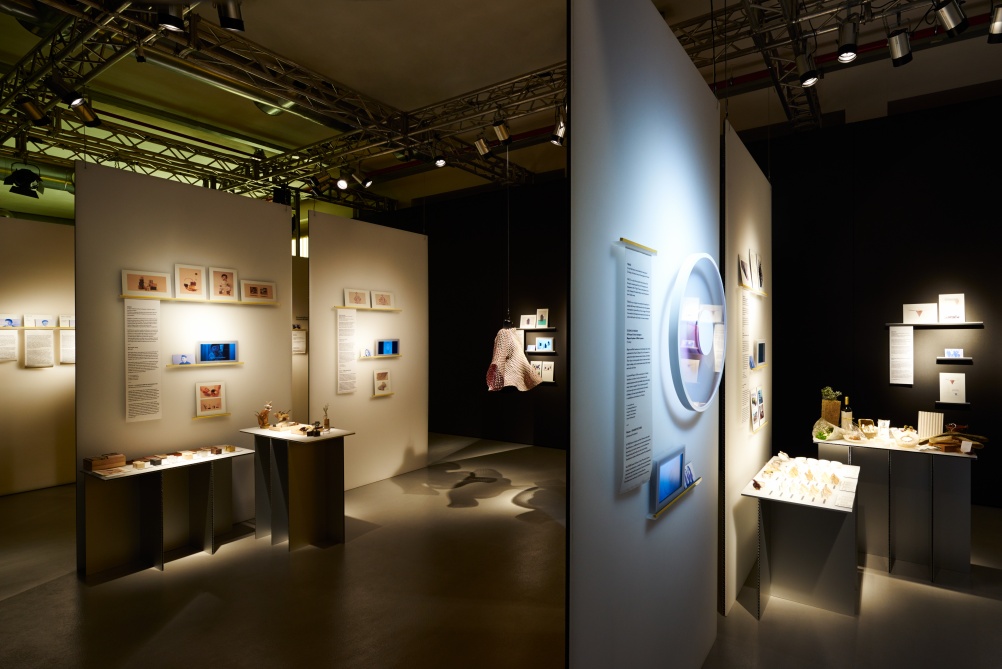 From furniture fairs to young talent exhibitions, design is taking over Milan this week. With installations and pop-up shops littered all around the city, the message is clear – that design is an integral and unavoidable part of our every day lives.

As part of Milan Design Week, we reported on the Lexus Design Award 2016 – an annual initiative from car company Lexus that embodies this message and sees students apply from all over the world with sustainable, innovative product design concepts, with the chance to gain funding to turn their ideas into a reality.

This year the competition was based on the theme of Anticipation, and saw more than 1,200 entries from 73 countries, which were whittled down to 12 finalists. Four were then able to develop their ideas into prototypes.

The winner was Agar Plasticity – biodegradable packaging made from algae, created by Japanese design group AMAM. “Plastic waste is a big issue, and agar can look very beautiful as a glass alternative,” says Noriaki Maetani, one of three designers at AMAM. “Our ambition is to move onto plastic bags, pens and toothbrushes.”

This isn’t the first time biodegradable casings have been explored – this year, IKEA announced they were looking into “fungi packaging” for its furniture, while start-up Skipping Rock Labs introduced a water bottle alternative in the form of a gelatinous blob surrounded by an algae film.

But what makes AMAM’s concept impressive is the research they’ve undertaken alongside scientists and within agar factories to create different grades of packaging – from high-end perfume casing to cheap polystyrene replicas.

“Agar is a food in Japan – it’s red seaweed,” says Maetani. “It undergoes a process of freezing and drying to turn it into solid packaging. We’ve made two different types – one gorgeous, and one cheap. The same process is applied for both, but changing the temperature and length of time of the treatment will produce different results.”

The plant packaging has potential to stretch across all industries, but there are still limitations – because of its biodegradable qualities, agar is prone to dissolve when wet. Maetani says that AMAM will be developing the agar to be “tougher” and “waterproof” in the future.

The other three shortlisted concepts all take on a similar idea to Agar Plasticity – a simple product idea, created through an alternative, interesting means of production. 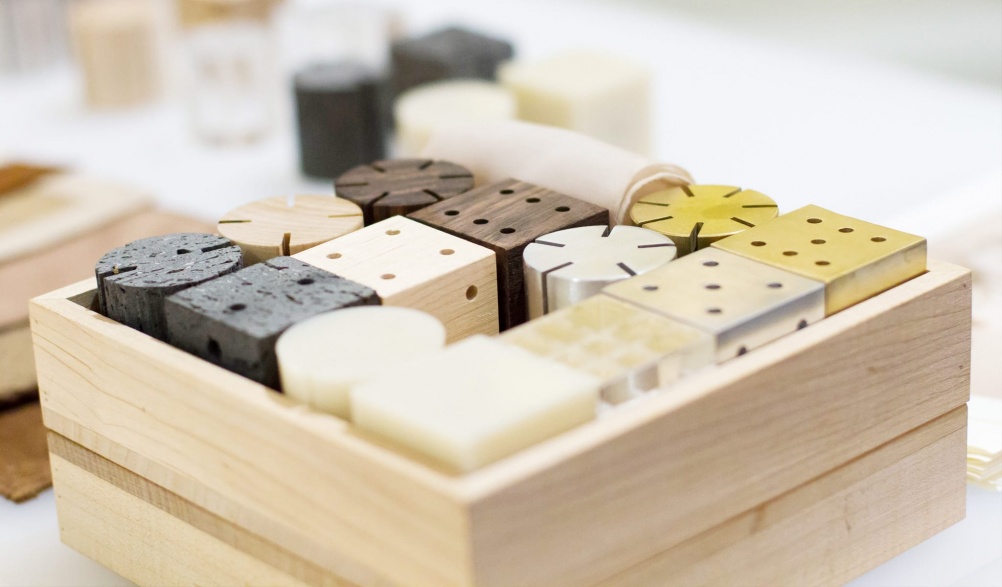 They include DADA, an educational children’s toy made of blocks that can be organised into different combinations; Shape Shifters, a plastic dress that changes shape, created using product design techniques; and Trace, a clock that visualises the passing of time with the use of UV dye.

DADA is composed of spherical and square blocks made of different materials, such as wood, metal and glass, with varying weights. They have holes, which allow them to be tied together in different combinations. Korean designer Myungsik Jang says that the toy can also be used for puzzle solving, and as a sensory aid for children with autism, who may have difficulty processing senses such as touch and sight.

“The holes and cracks in the toy allow it to be combined with other objects too, creating a playful tool,” says Jang. “Children can learn about artificial and natural things.”

A deeper layer of meaning is also engrained within the toy, with the different materials representing elements, such as water, which in turn symbolise human attributes, such as honesty. The use of elements is “important within Asian culture”, says Jang, and can be used as an indication of a child’s personality depending on what blocks they play with.

While some might be cynical about a toy’s ability to decipher somebody’s personality, at the very least DADA is a simple, beautiful tool that can teach children about problem solving, sight and touch in an enjoyable way.

Shape Shifters is a dress that aims to be a “hybrid” between the design and fashion world, says Canadian designer Angelene Laura Fenuta. Made of modular plastic in place with screws, the dress can be stretched and contorted into different shapes and sizes, making people “active participants” in what they wear. “It’s not a dress for mass production, but it’s about innovation and expression,” says Fenuta. “Everything is multi-disciplinary now – you should be inspired by other fields.”

Trace, created by Turkish sisters Begum and Bike Ayaskan, is a clock that uses liquid to tell the time – with no numbers or physical clock hands, a rotating UV light that moves by the hour is projected onto a photo-chromatic liquid, made up of pigments in mineral oil. The passing of time can be “visualised” through the changing of colour, says Bike.

With no liquidised minute-hand alternative, it’s impossible for the clock to show the exact time – and that’s the point of the project. “The product reflects how time has become a machine that people live by,” says Begum. Bike adds: “We’re interested in representing things that people don’t understand, in this case nature,” says Bike. “Telling stories is just as important as a product being functional.”

Other panel finalist concepts included a plant pot that changed colour to indicate when it needed watering, a magnetic silicon lamp with a moveable head that put the power of personalisation in the consumers’ hands, and a cardboard cone designed to be dropped into disaster zones from airplanes with emergency provisions.

While all the finalists’ concepts are so different, they are all unified by the same idea – that design should be a platform for risk-taking. Whether a children’s toy, a plant pot, or an emergency aid, all the products are unique takes on objects used across all facets of people’s daily lives, with the ability, as architect and awards judge Toyo Ito says, to “change society” – with young talent thinking up new ideas every year, it’s just a question of what will be next.