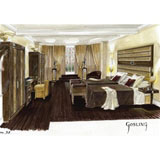 Luxury hotel The Goring, located on Buckingham Palace Road in London, is set to get a facelift from designer Tim Gosling, who will reinvent each of its 71 bedrooms with bespoke designs.

Gosling will create four prototype room designs, which will be rolled out across the portfolio of hotel bedrooms over the next four years. Each design will be individual to the bedroom, but there will be a more contemporary interior look overall, explains Gosling. The first implementation of the scheme will be completed by August. The Goring is anticipating redesigning 18 rooms a year, says Gosling.

‘By osmosis, things have evolved over the years at The Goring. It has a very English hotel look, but was appearing quite dated. It needed some freshness,’ explains Gosling.

The Goring hotel opened in 1910 and was one of the first establishments to fit each bedroom with a bathroom and central heating.

Gosling will carry out the work under the name of his design studio, Gosling, set up in 2005. Last year, he designed a dining room area for the hotel while he was a director at the consultancy Linley. Gosling is working on a series of other private commissions, including a project to design the interiors for a new-build library in a home in Kensington, London. He is creating items to fit within a ‘very classical’ theme and is using walnut materials and hand carvings to generate the look. The library is expected to be ready by next February.

Gosling is also working on two home projects, which are located in London’s Hampstead and Queen Anne’s Gate. Over the years, he has created designs for various high-profile clients, including The Savoy Hotel, The Berkeley Hotel and the Oriana cruise ship.

Timorous Beasties design to be pulled by Rich Mix