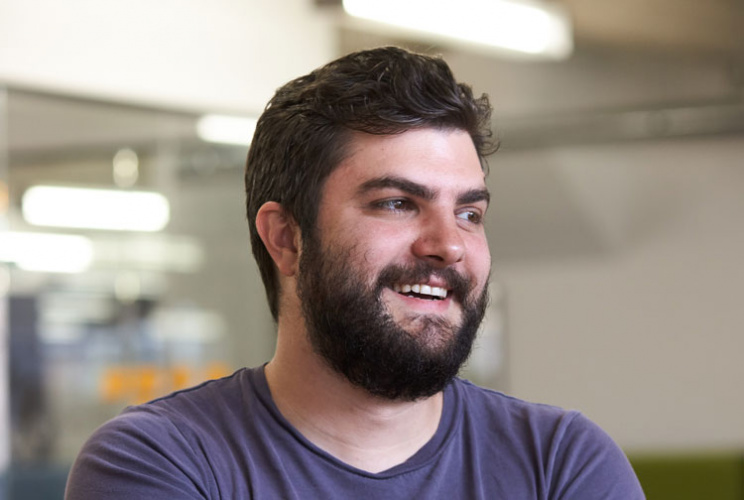 Pip Fazakerley: Broadly we take our clients’ ideas for interactive and experiential pieces and find ways to translate that to AR so we can add objects or change things about existing objects. Or we use VR to transport a user to a completely new space, or experience something not feasible in the real world.

We often work on smaller pieces which are not always public-facing, such as internal meetings or conferences. A client might want to translate their ideas — a new product or campaign — into a more engaging medium for their peers or clients.

PF: It’s almost nothing to do with my current employment — I left school after the first year of AS Levels with a C in photography. I then moved to Denmark to study at an international school with a looser structure.

After that, I looked for positions in game development and practised character and abstract animation in 3D. I’m self-taught when it comes to programming and 3D animation.

DW: What’s your career journey been so far?

PF: Eventually I got an internship with Framework Creatives back in London. It was a 3D modelling position, producing assets for their visuals. It turns out I was a bit faster and better than they anticipated, and they hired me after the internship was over. It was almost a decade ago now but at the time there were only three people, largely producing 3D visuals for events and occasionally museum and exhibits.

I’ve moved into a more independent position and take on clients’ jobs by myself — we have a select number of clients, so people get to know certain people and understand what they mean and want.

PF: Very — but often in ways that are difficult to predict. More often than not, we take a client’s desires and abstract goals and translate what they want into existing technology — technology we are able to use effectively and that they can afford.

AR apps and VR apps are physically involving — you have to get up and move around and pay attention to what’s going on. Things can go wrong if lighting is not great, for example. You’re asking a lot from customers so we try to make sure clients want to accomplish something you can’t in another medium, such as video.

DW: What strengths do you need to be a AR/VR developer?

PF: Problem-solving; there are a lot of bugs in interactive programming, so you have to think your way around them, which can be complicated and requires creative thinking. The software we work with can often go wrong, and sometimes it’s difficult to find where the problem is.

You also need lateral thinking for the design aspect. If you take a 2D style that’s only appeared on a piece of packaging, and sometimes a client hasn’t thought about how it would move in an interactive sense. Translating it into a 3D style so that it looks congruent and like the same thing across two mediums can be really challenging.

PF: Handing over a finished prototype to a colleague and seeing the excitement people get out of something you’ve made.

Recently I was working on a project that took a while — it’s an interactive Android application which creates 3D trees on a flat surface, like a 3D model. When you tap on the trees, they move and sometimes birds might fly out. When I showed it to a designer, she went crazy for it.

I also enjoy the design element; a lot of the problem-solving in interactive design is making sure the user is doing the thing you want them to do, and that’s a really interesting part of the job.

DW: What are some highlights?

PF: One of my favourite projects was the first interactive VR piece we did, which was for a chiropractor’s clinic. We made a VR spine, so that when the patient put on a headset, they would see a room with a model or a spine in the middle. The practitioner was outside the VR and they could use controls to manipulate the spine into the position of the patient’s spine so as to better explain the problem areas. We built systems to highlight certain vertebrae, comparing a healthy spine to the patient’s, and showing how prescribed exercises could help the patient’s structure.

They’ve found it so useful in communicating the problems that patients asked if they could go back into the VR world to see their progress.

DW: How has the popularity VR/AR changed over your career?

PF: It varies but the equipment has become a lot more available. In 2014, we used to offer virtual reality as a value add-on for clients and would lend them a headset so they could use it.

Several clients have just bought the equipment for themselves. We always do a VR piece for IKEA in the UK, and they bought 60 VR headsets for their stores here, and when we produce content they bring them out of storage and we upload the footage or content and they can set up for public use.

AR is now being built into phones, so when you look through the camera of the phone, you can add in objects. For example, we could animate the packaging on a box of cereal, so that a picture is replaced with an animation. Or you can add in pre-defined objects, like with IKEA where you place furniture into the room and with the correct scale.

PF: The bug fixing — occasionally it can take a day out of your schedule.

In terms of design, it’s never that bad. My programming is such an open discipline that there’s always a solution but sometimes you can be completely wrong in predicting what will make a user interact with an app.

Recently, we had a start screen for an app; there was a big button and writing which said: “press here to start the experience.” Everyone pressed on the text instead of the button — the button didn’t look enough like a button. The more experience we get, the more we can foresee problems like that. But we build options into the programming earlier, so we have another option just in case.

DW: If you were interviewing for a junior AR/VR developer, what would you look for?

PF: Very much the lateral thinking and problem-solving ability. Being able to interpret what the client wants into what a user can interact with is crucial.

It’s also great to have a portfolio of a few little pieces, which are ideally interactive. A really good example is taking something very simple that everyone has played like Tetris and making your own version. If someone goes all the way through your project and says, “yes, this is Tetris”, that shows a well-rounded ability to use interactive design tools to create a recognisable end product.

DW: What advice can you offer people considering a job in AR/VR development?

PF: All of the software is free to download and use. And if you’re interested enough you probably own the equipment — you need a laptop and a phone.

All the information is out there and free — so start making things, and crucially finish those things. Don’t have a lot of unfinished prototypes: come up with an idea, build it and finish it. The backend of a project is very different from the much more fun beginning stage and it’s much more important to learn about the end of it.

DW: What is the job market like for AR/VR development?

PF: Both Apple and Google are building AR systems into their phones — they’re betting big on this medium — and someone is going to have to build their content. Google is probably more likely to come up with a YouTube-like tool for producing content.

This role hasn’t been formalised all that much — not many people are hired specifically to do AR/VR design. Often it’s paired with broader app development – if you’re an evangelist for AR, it’s probably best to look at those roles and work out how you can bring it into those projects.

Salary expectation based on CW Jobs: