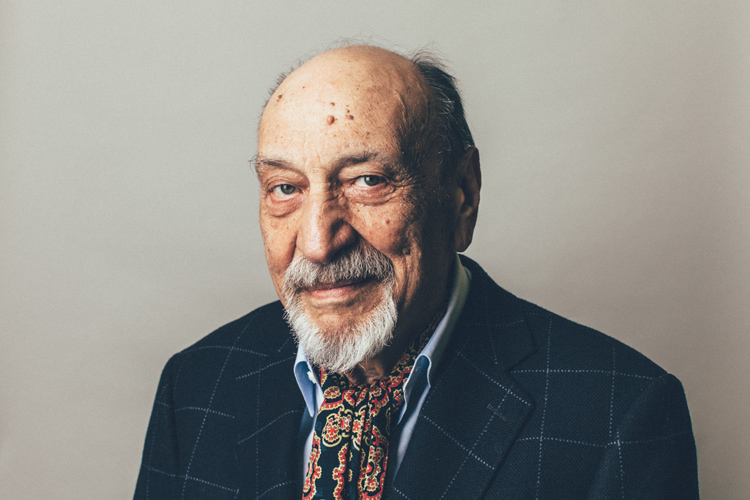 “Art and design are not the same thing,” says Milton Glaser, the American designer who has created nearly 500 posters and countless visual identities throughout his career. “I have a secret wish to go outside the realm of commerce and into the realm of art. How often I have succeeded is the judgement of history.”

The 88-year-old graphic designer is behind many of the best-known pieces of graphic ephemera from history, including the much-seen “I love New York” logo and tourism campaign, the psychedelic Bob Dylan poster for Columbia Records and the Brooklyn Brewery logo. 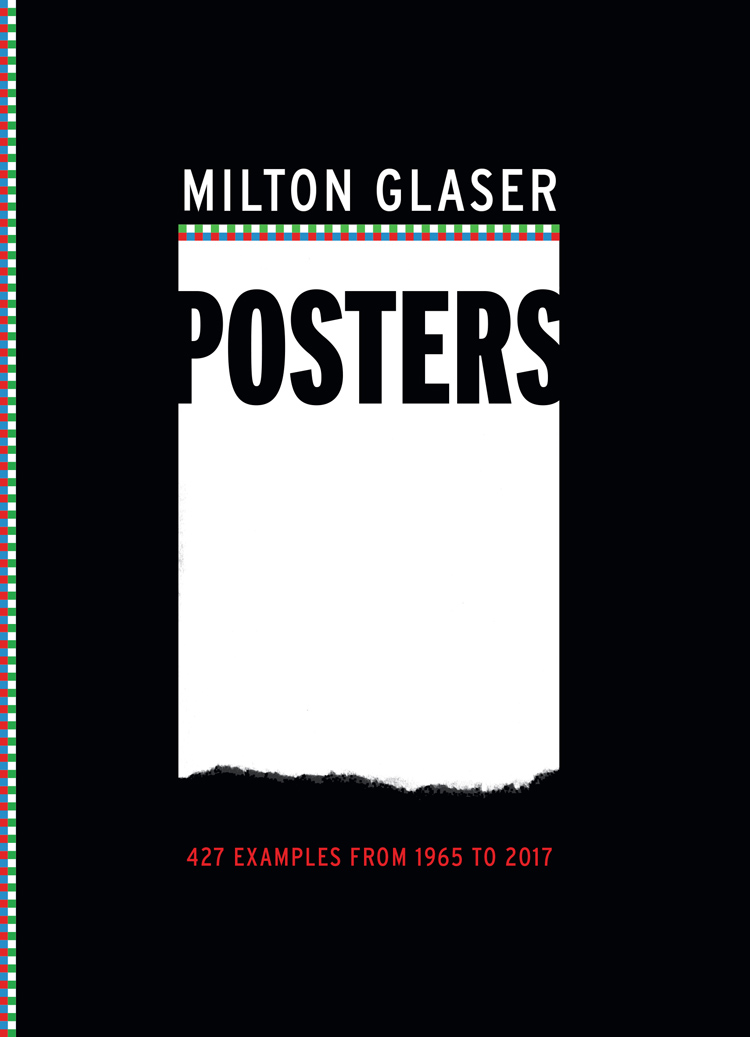 Now, he has compiled a book of over 400 of his posters, with commentary alongside each one, detailing how it was designed or printed, the meaning and purpose behind it and how it was commissioned – and in some cases, how it could have been made better. Milton Glaser: Posters, published by Abrams&Chronicle, is an extensive and varied look at Glaser’s work, which he says spans his “best” through to the “more mediocre”.

“Art and design often did not relate to each other”

His self-critical eye underpins the whole book, and goes some way in explaining his pursuit for “art”. While he says the book demonstrates how his posters have successfully been used to “inform” and “persuade” an audience, or alternatively “decorate their subjects” to make something appear more appealing, at the core of the publication is Glaser’s desire to transcend purely “professional” practice and make an emotional impact on people as well – in other words, move from what he believes to be “design” through to “art”.

“Very often, [art and design] have no relationship to each other,” he says. “Every once in a while, a work that is intended to be functional and has been made in response to a client’s problem turns out to also be artistic – the feeling you derive from it is emotional rather than logical.

“This happens rarely,” he adds. “But when it does, those pieces are very sustainable. How often I have personally succeeded at this is not my judgement to make.”

52 years worth of posters 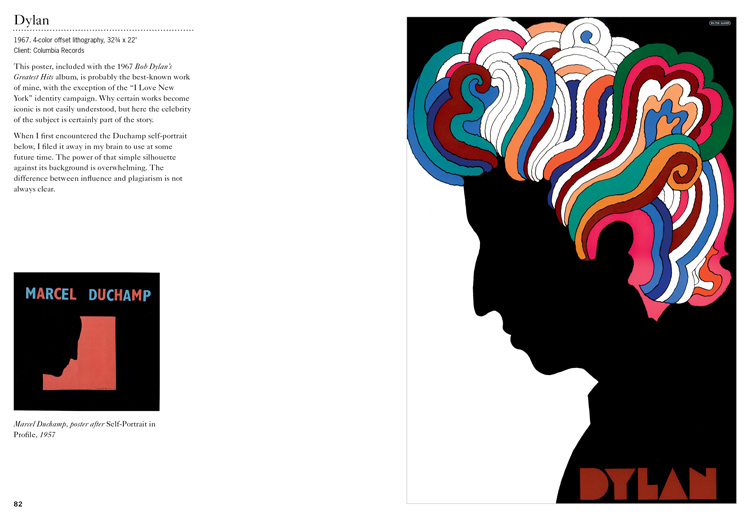 The book is chronological, including posters produced over six decades from 1965 through to 2017, and features some of Glaser’s most celebrated work, alongside the lesser-known examples too. With no index, Milton Glaser: Posters encourages readers to flick through and allow the imagery, always on the right-hand page, to catch their eye, rather than searching for popular or well-known designs.

Apart from those designs most associated with Glaser, such as the “I Love NY” campaign and the Dylan poster, the posters in the book span a breadth of subjects. The 1960s section sees what Glaser describes as one of his other “best-known works”;’ a poster advertising an exhibition of nude paintings, simply titled Big Nude and featuring a bare bum and legs so big they extend beyond the size of the poster.

In the 1970s, Glaser looks at wider social and political issues – a surreal poster depicting a globe within a room titled Give Earth a Chance sums up a campaign for the Environmental Action Coalition, while another depicting people of different ethnicities drawn using various mediums such as charcoal and watercolour represents a diversity campaign called All Together Now. Also in the 1970s are his advertising posters for Olivetti typewriters, depicting how they were the height of technology at the time. 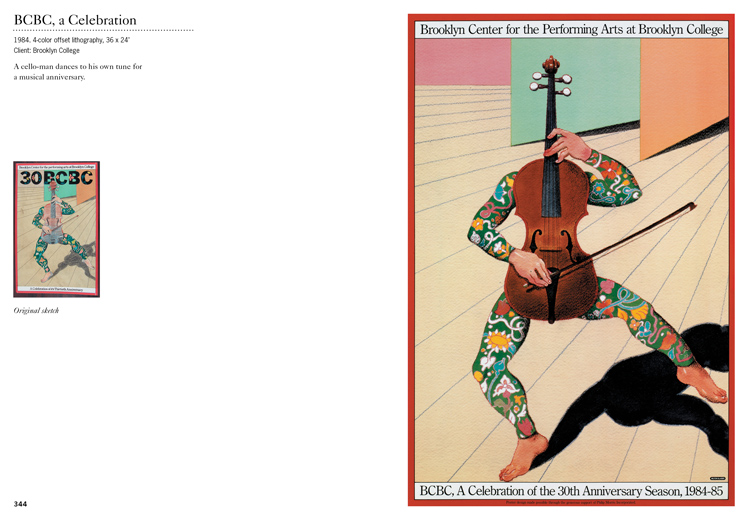 The 1980s is awash with colour, and sees many of his posters taking on a kaleidoscopic or watercolour effect, particularly several posters advertising a BBC series of William Shakespeare productions being shown by US broadcaster PBS, while the 1990s sees a more commercial side with a striped advertising poster for Vespa.

The 2000s contains what Glaser describes as a “rather tepid” follow-up to his “I Love NY” campaign from 1977, and the most recent decade sees a stark, self-initiated project entitled “To Vote is Human”, encouraging the public to vote.

“You can’t be good at everything”

Nestled at the back of the book are works that Glaser believes to be his less successful posters, and are ascribed less space at four posters to a page. This includes everything from anti-smoking campaigns and exhibition advertising through to depictions of Elvis and posters raising awareness of water conservation.

This snapshot summary gives insight into the breadth and variety of Glaser’s work over the last six decades. From purely advertising and commercial through to charity, health awareness and cultural appreciation, he has been democratic in his commissions, and the self-critical nature of the book shows he has been aware of his works’ flaws and weaknesses along the way.

“I didn’t want to only show work that represented the best of what I did,” says Glaser. “It’s more appropriate to also show the crummy things and the clinkers. You can’t be good at everything.”

“A great poster brings together brain and heart” 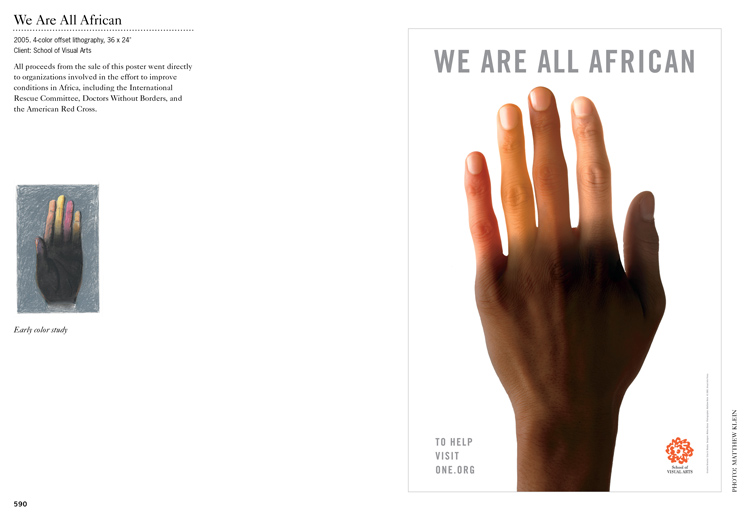 But what is it that makes a poster “good” in his eyes? One that effectively achieves its purpose, he says – but one that also achieves beauty becomes a “great” poster.

“Some things are effective, even though they do not move people visually or imaginatively,” he says. “Effectiveness and beauty do not always line up together. But I suppose if you were providing a basis for judgement for what makes a great poster – it’s one that reconciles beauty and effectiveness.”

“The brain operates in two ways,” he adds. “Logically, or intuitively and through the imagination. The really good stuff comes out of that reconciliation of brain and heart, logic and emotion. You have to anticipate what your audience will understand, then search for a solution that is appropriate, powerful and not repetitious.”

“If you can’t draw, you’re in real trouble” 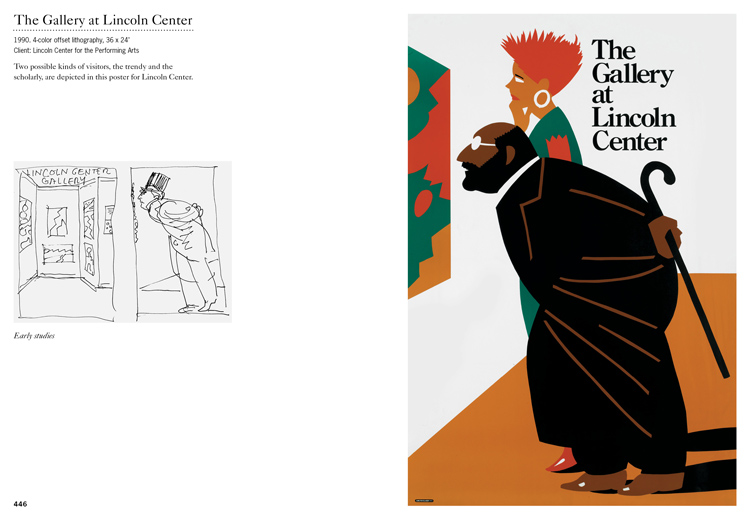 Having a wide range of skills is what enables designers to produce great work, he adds, because it allows them to adopt many styles. At the core of this is the ability to draw and create by hand.

“If you can’t draw as a designer, you’re in real trouble,” he says. “Many people in graphic arts are incapable of drawing, and this limits them to layout, collage and typography. I come to each project with an open mind, then what emerges stylistically is something that is driven by the audience.”

Whether Glaser’s work invokes an emotional response in its audience or not is for each individual reader to decide – but ultimately, he says he hopes his new book will bridge that gap between informing and educating, and providing a source of enjoyment and entertainment for his readers.

“I hope people will derive a sense of happiness from it,” he says. “I want it to be pleasurable to read, both in an analytical sense, and in just seeing things that are harmonious, beautiful and worthy of repetition. I hope the book has duration, and can be interpreted differently over and over again.”

Milton Glaser: Posters is published by Abrams Books on 27 March 2018. It is available to pre-order from the publisher’s website. 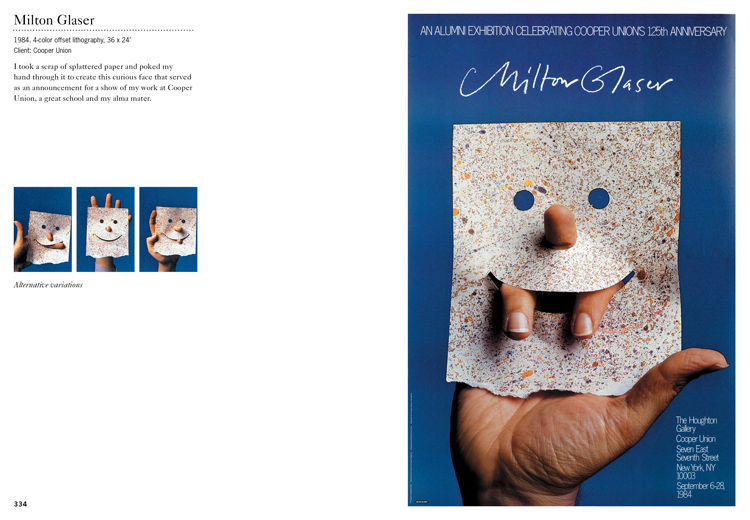 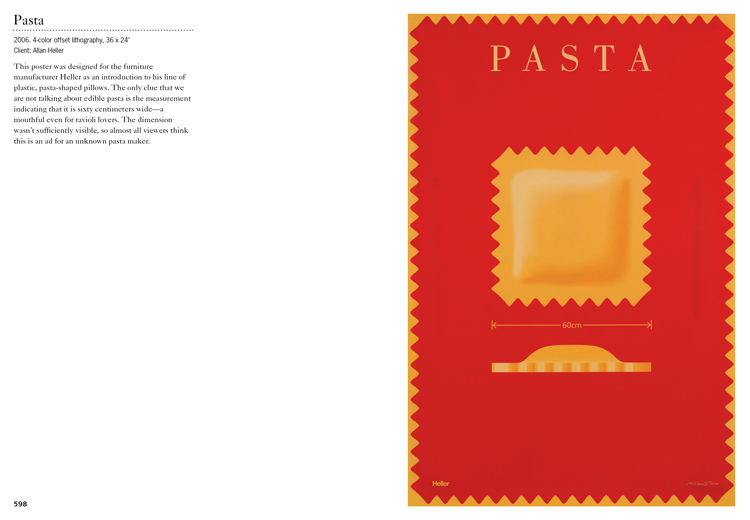