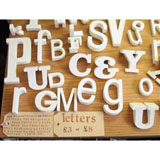 A new generation of designer-retailers is following in the footsteps of the likes of Ron Arad, Terence Conran and Zeev Aram, creating novel retail concepts that are attracting the public and trend-spotters alike. With a unique approach and all the right connections, they can’t fail to succeed, says Liz Farrelly

With the ever-fluctuating fortune of the retail sector, high-street brands are constantly striving for a unique product, merchandising technique or promotion that will give them the edge over their competitors, however momentarily. For them, trend-watching has become crucial.

One sector of the retail community that never fails to attract camera-toting, notebook-clutching reconnaissance by the bigger brands is designer-retailers. There, invariably, you get more than you bargained for, with designers bringing not only their visual and problem-solving skills to the mix, but also their own, very personal agendas. Add a network of contacts, with their creative friends as (often exclusive) suppliers, and the retail offering is not only unique, but in demand.

It’s not new. Two of the most successful designer-retailers of all time kicked off in the same year. In 1964, both Terence Conran (Habitat, The Conran Shop) and Zeev Aram (Aram Store) opened their doors in the then epicentre of hipness, west London’s Chelsea. Offering different mixes of in-house-designed furniture, alongside classic Modernist pieces by Le Corbusier and Marcel Breuer, and French homewares, Conran and Aram were also the first retailers to bring contemporary design to both the masses and the contract markets.

Back in 1983, a new breed of creative retailer hit the scene, taking a pragmatic approach to the dark days of the early-1980s recession. Trained as architects, but inspired by the run-down inner city – and skips full of scrap – Ron Arad and Caroline Thorman opened their One Off showroom in 1983, selling salvaged items artfully welded into what are now museum pieces. The Rover Chair (a car seat framed with Kee-Klamp scaffolding) and the Concrete Stereo (for added stability) graced a cave-like interior amid Covent Garden’s reclaimed warehouses. People gawked, the world’s press loved it and Arad’s name was made.

By the early 1990s, fellow ‘creative salvager’ Tom Dixon had opened his shop, Space, in All Saints Road, off London’s Westbourne Grove. Not only was Dixon selling his new Jack lights, he was showcasing objects by friends and colleagues (who shared his workshop), alongside pieces designed by himself and manufactured by Cappellini in Italy. World-class restaurants and designer labels’ flagship stores followed. A new generation of designer-retailers have joined London’s hot-house shopping scene, hoping to emulate this success.

Taking advantage of the massive influx of weekend visitors checking out Spitalfields and Brick Lane markets in London’s East End, Shelf welcomes browsers on Saturday afternoon and all day on Sunday. The rest of the week, proprietors Katy Hackney and Jane Petrie work in their studios, as jeweller/metal-worker (one-offs, special commissions and small batches, ex-Royal College of Art) and costume designer (for film and TV), respectively.

Opening in 2001, to sell ‘things we like’, Shelf spearheaded the renaissance of Cheshire Street, bringing together an eclectic range of objects, from naked Russian dolls (a best-seller), to artful tea towels, plaster-cast letters (made from silent movie titles found in a Californian barn), Scandinavian ceramics, toys, stationery and more. The concept is so flexible that whenever a new designer-supplier walks in the door, or the team unearth a cache of goodies while travelling – which is an essential part of the buying process – all eventualities may be accommodated.

‘We had a vision, but it’s evolved into something else, which is good. We know when we see something if it’s for Shelf. It’s like it has a mind of its own,’ Hackney explains. ‘We have lots of creative friends who try out new things at Shelf to see how customers react, so we have items that no one else stocks’, she adds.

The shop itself is relatively undesigned with disparate objects both massed and artfully arranged. Even the graphics and packaging are low-key and ‘found’. ‘We both drag hundreds of boxes, bags and papers back from our travels,’ explains Hackney, ‘while the identity evolved as we scanned things from around the shop for the postcard’. 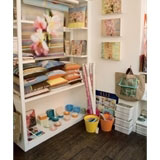 Just over a year ago, renowned homewares pattern-maker Ella Doran put together a shop environment that complements not only her designs (applied to mats, cushions, blinds and more), but her working methods too.

With the company going through a growth spurt, Doran was again developing her own range of products after a period of licensing to large manufacturers. ‘I like to meet the public. From my first days of designing, that was my inspiration to start my own business’, explains Doran. So, when a shop came up for rent just down the road from where she lives, she decided to move her design studio into the space, taking the opportunity to get instant and invaluable feedback from her customers.

Doran’s signature photograph-based homewares are matched with a small, but unique selection of colourful ceramics (Yoyo) and glass (Hock de Tassen), as well as hand-made Raku plates from France, bags, purses and Emma Jeffs’ window film. The selection is small, but perfectly formed, and changes seasonally with the colours of Doran’s collections. Meanwhile, her work for John Lewis has just won the Laurent Perrier Design Award.

Based in London’s Soho, Beyond the Valley is the brainchild of three Central St Martins College of Art and Design graduates – Jo Jackson, Kate Harwood and Kristjana S Williams. Having studied graphic design and fashion with marketing, they then spent nine months cramming business basics, before opening in 2004. ‘We could see a huge gap in the market for an innovative, multi-directional design company that discovers Britain’s newest creative talent in fashion, art and design,’ explains Jackson.

Having grown up in the West End of London, Jackson was keen to stay central. It was one of the first decisions all three agreed on. ‘I’ve been more exposed than most to the London retail experience. Oxford Street was my high street’, she explains.

Bucking the trend eastward, Beyond the Valley preferred to maximise footfall and the spending power of designer-tourists wandering over from nearby Bond Street. ‘We’re aiming to raise the profile of the designers we represent, so putting them in a shop next to high-end boutiques instantly made people sit up and notice’, says Jackson. 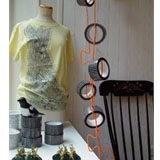 Their fledgling design consultancy is housed in the basement – the three proprietors each spend one day a week in the shop – so overheads are spread between retail, events organising and special projects.

With the widest range of merchandise of the new designer- retailers, including fashion, jewellery, accessories, one-off artworks, stationery and homewares – some of which are exclusive – Beyond the Valley has an open-door policy to interested parties.

‘We constantly have people checking out what we’re doing and photographing the shop window. But it is flattering that others look to us for new trends’, says Jackson. ‘We focus on promoting young design talent, so it’s inevitable. It’s also a reassuring sign that we must be getting something right.’