Update 9 May 2017: Pink Floyd: Their Mortal Remains is set to open this weekend on 13 May, and images of the exhibition have been revealed. See latest exhibition shots at the bottom of the piece.

“We’re going to build a wall and Pink Floyd are going to pay for it,” says drummer and founding member of Pink Floyd Nick Mason, delivering a rapturous punchline.

He is discussing the role of pop music and politics with fellow Pink Floyd founder–member Roger Waters. The pair have been brought together to talk about The Pink Floyd Exhibition: Their Mortal Remains, which is coming to the Victoria and Albert (V&A) Museum on 13 May.

Waters conceived the album The Wall (1980) as a metaphor for childhood alienation, the Second World War and the loss of his father but it has been broadly interpreted in all sorts of ways over the years.

A physical wall which could be collapsed during a live performance was also designed by architect and set designer Mark Fisher for what was one of the most ambitious stadium tours ever accomplished – an act which has created a benchmark and blueprint for other big rock and pop shows since.

The band’s visual identity was always rich, visceral and deeply entwined with the themes and concepts of the records and shows, joining up the music with the two-dimensional album art and three-dimensional fabrications of flying pigs, giant puppets and tumbling brick walls.

To ensure the authenticity of the exhibition there’s been a very deliberate effort to turn to the same designers who have worked with Pink Floyd on these very things.

The creative director for the show is Aubrey “Po” Powell, who has worked with Pink Floyd event collaborator Paula Web Stainton and a V&A team led by senior curator Victoria Broackes. Stufish, which was founded by the late Mark Fisher in 1994, has led exhibition design.

Powell, together with Storm Thorgerson – who died in 2013 – created album art for Dark Side of The Moon, Delicate Sound of Thunder and many more Pink Floyd records, through the Hipgnoisis studio they founded together.

Powell says that the development of Hipgnosis ran parallel with the burgeoning career of Pink Floyd. The formative years of the studio were in no small way helped by the band.

Hipgnosis work is on show throughout the exhibition alongside artwork by other collaborators like cartoonist and illustrator Gerald Scarfe.

Powell and Thorgerson got their first gig quite early on, designing Pink Floyd’s second album A Saucerful of Secrets (1968), and set a precedent for what was to come by being consciously abstract and by not featuring the band on the cover.

The reason Pink Floyd’s debut Piper at the Gates of Dawn (1967) featured the band on the cover was down to the record company’s instruction.

Pink Floyd soon had more creative control, with Roger Waters in particular having a big say in who the band worked with, according to Powell. He says: “The best thing about our relationship with them was that they always trusted us to get on with it.”

This long-time collaboration was perhaps cemented many years before, though. Like Mason and Waters, Powell and Thorgerson were from Cambridge and were part of the same circle of friends.

“I worked as a roadie and drove a Mini van for the band before doing their graphics,” says Powell, who used to drive the late Syd Barratt to gigs.

Powell struggles to watch a video of a Barratt performance being played behind him as it brings back memories of his vulnerability. “It makes me feel quite emotional”, says Powell. “He was doing a lot of LSD back then. Sometimes he would be lucid, sometimes not.”

The fact that Powell has such a long history with the band has put him in a good position to advise Stufish. Before Fisher set up Stufish in 1994 he worked on the stage design of several major Pink Floyd tours. Fisher died in 2013 and the band has been largely inactive since 1995, so current Stufish chief executive Ray Winkler says the forensic and anecdotal detail provided by Powell has been invaluable.

Winkler says: “There’s so much visual language available to draw on, and one of our challenges was turning two-dimensional objects into three-dimensional ones. It’s a question of scale and having album art reimagined in an exhibition context”.

This will include reimagining the suit of light bulbs worn by a model on the cover of the live album Delicate Sound of Thunder (1988) and the giant head sculptures designed by Thorgerson for the cover of The Division Bell (1994).

Overall the exhibition sets out to bring together music, art and design while also presenting recorded and live performances for an audience, who will be taken on a journey from the underground club scene of the 1960s to the present day – although the band technically disbanded in 2014 at the end of a final album, The Endless River, having been largely inactive for some time.

Some 350 objects have been gathered for the show. Waters says he gave curators access to a lock-up where he’s kept artefacts. Casually, he says, “I’ve never been there myself”, and sees Mason as the band archivist.

One of Powell’s major tasks has been rummaging through archives and any bits and pieces band members might have held on to.

Hand-written lyrics, musical instruments, letters, stage props and original artwork have all been obtained and some of this is placed into context by being displayed alongside objects from the V&A’s own collection such as psychedelic poster art from the mid 1960s.

The gateway to the exhibition is a replica of the Bedford van used as the band’s touring vehicle in the mid-1960s, which visitors will walk through as they enter.

This gives way to an introductory section on London’s psychedelic scene and the UFO club where Pink Floyd was once the unofficial house band in 1967.

The atmosphere of the club will be recreated with oil and water projections, like those made by Pink Floyd’s lighting designer Peter Wynne Wilson and will be accompanied with a soundtrack to ensure a fully immersive experience.

Winkler says there will be some interactive elements, but in the spirit of surprise, won’t reveal what they are.

His team has recreated some of the inflatables and oversize stage props conceived by Fisher, which again will have presented him with a challenge around scale – although this time presumably scaling down.

One of the main narratives of the exhibition will involve exploring the pioneering spirit of Pink Floyd and demystifying the equipment and instruments that they manipulated and hacked to produce their sound.

One of the objects you can see is a custom-built device designed by Pink Floyd keyboardist Richard Wright to pan the group’s live sound around venues via a joy stick.

As well as being a vital piece of equipment for use in Royal Festival Hall and Royal Albert hall shows in the late 1960s it was used in the recording of the clock montage in the song Time on Dark Side of the Moon.

Other artefacts include original paintings by Syd Barrett – also a keen artist – and the cane, which Roger Waters, Syd Barrett and Storm Thorgerson were beaten with at school. The significance is that it was the inspiration for the giant teacher puppet’s cane on The Wall tour and is something that clearly stayed with Waters for a long time. 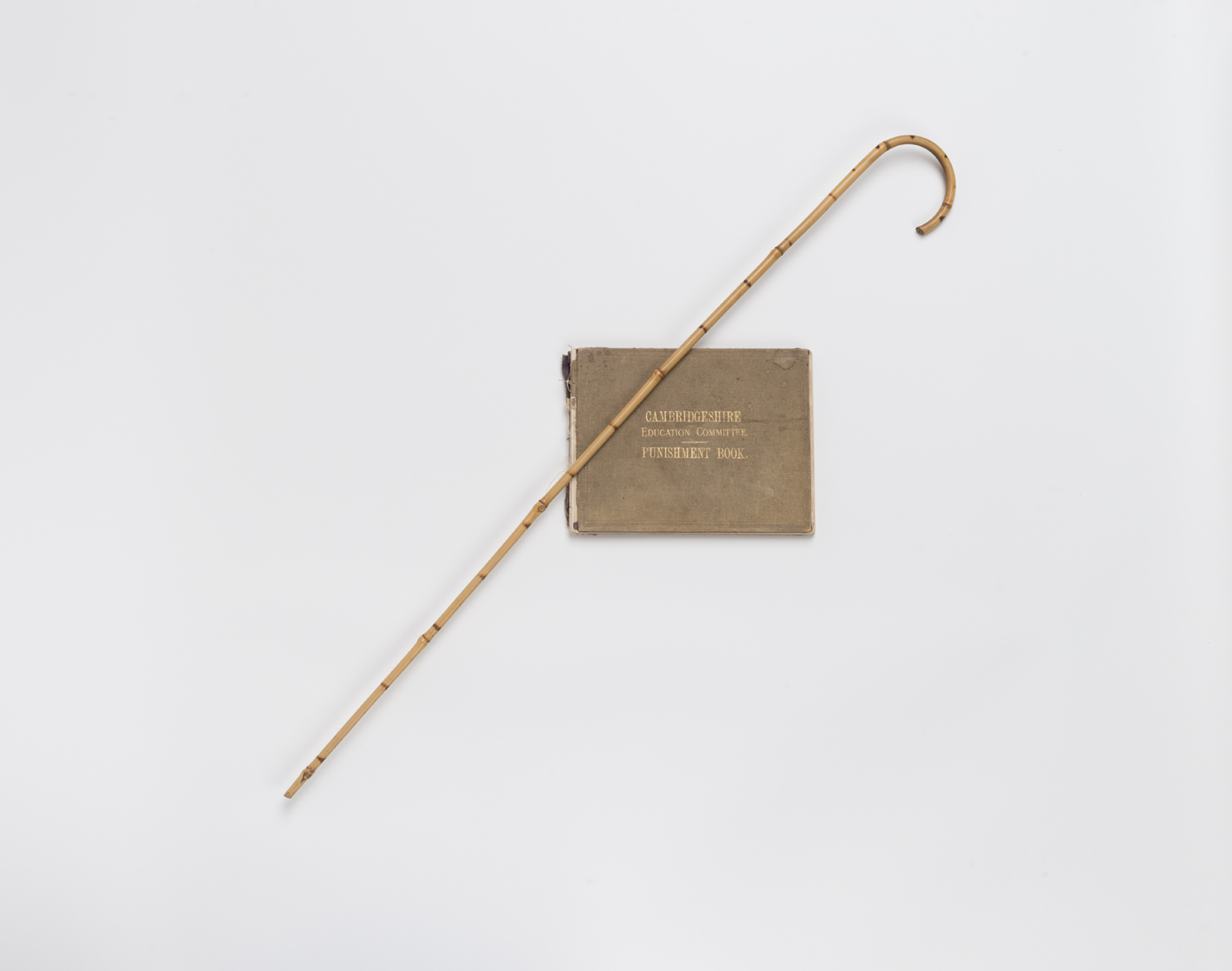 It is another of the many artefacts which Powell and his team have managed to source. Waters – who says he has not had much to do with the show, and jokes at one point “I’m actually really looking forward to going along” – is particularly intrigued about being reunited with the stick.

Visitors will also be able to see what each of the boys was beaten for in an accompanying punishment book.

The journey of the exhibition is largely chronological and pivots around key punctuation points in the band’s career such as Barratt leaving the band in 1968, the same time that Pink Floyd eschewed singles in favour of albums and more experimental ventures, including soundtracking art-house movies and writing the music for a Pink Floyd Ballet in 1972.

It was in the 1970s that the band’s experiments with studio technology really took off, particularly at Abbey Road Studios where Meddle (1971), The Dark Side of The Moon (1973) and Wish You Were Here (1975) were created.

Many instruments have been acquired for the show including Dave Gilmour’s Stratocaster guitar, known simply as “the black strat”, which has been used since the 1970s.

It was in the 1970s that Pink Floyd became much more political, a move echoed in the visual and theatrical expressions of the band.

Bizarrely, visitors to the show will be able to find a letter from a helicopter pilot who was hired to chase after the pig, which came free of its fastenings and floated off towards Kent.

While progressive music – the big music – had arguably reached its zenith by the early 1970s, Pink Floyd carried on, as prolific and popular as ever. Meanwhile by the late 1970s punk was on the rise and this cultural shift is captured in the exhibition, which even documents the I Hate Pink Floyd t-shirt worn by the Sex Pistol’s Jonny Rotten.

Powell recalls: “I actually saw him wearing that and thought, well this is the end, but of course it wasn’t.” A measure of this might be that today there are still 10,000 sales of Dark Side of the Moon every week.

Pink Floyd continued to perform and tour through the 1980s and into the 1990s with world tours of A Momentary Lapse of Reason and The Division Bell and the exhibition follows this journey to the end.

There will be a series of talks, events and spin-off activity when the show opens as well as a book to accompany the exhibition, which has been designed by long-term David Bowie collaborator Jonathan Barnbrook. 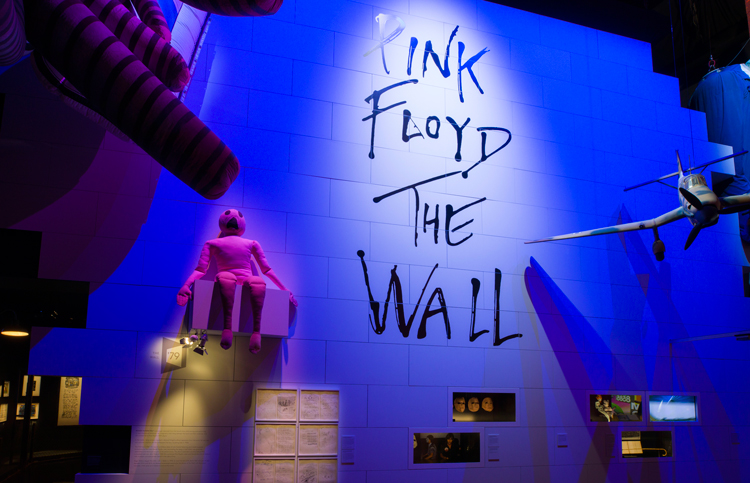 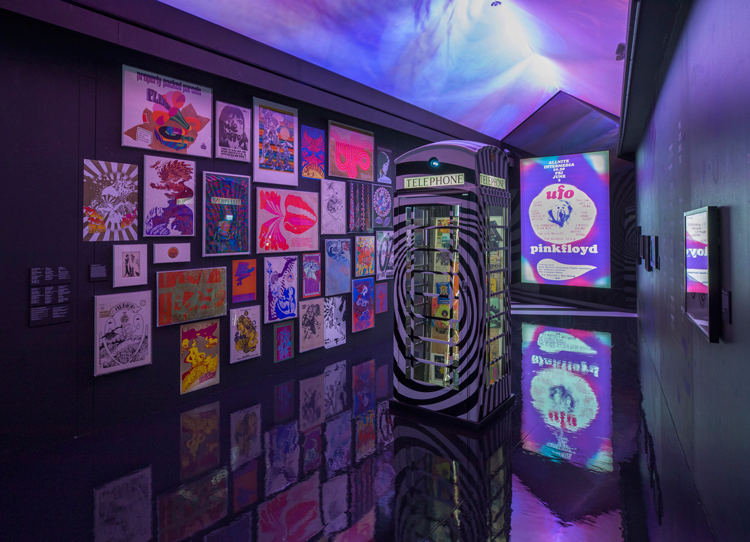 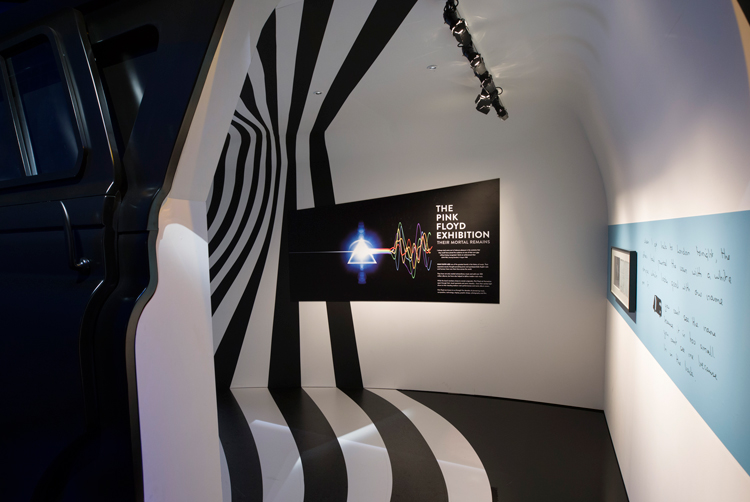 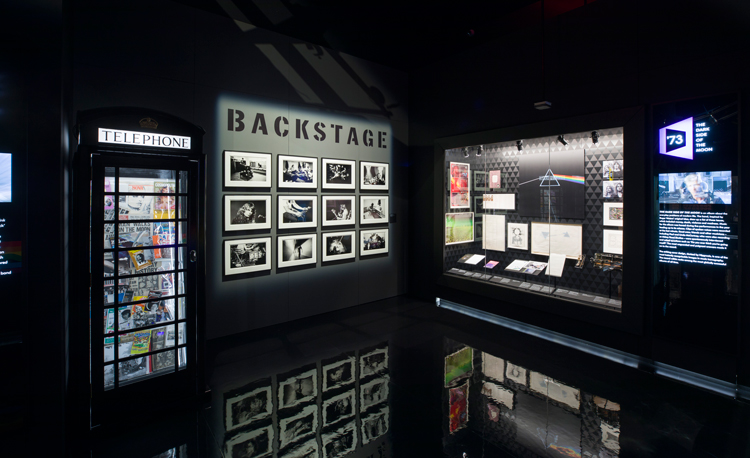 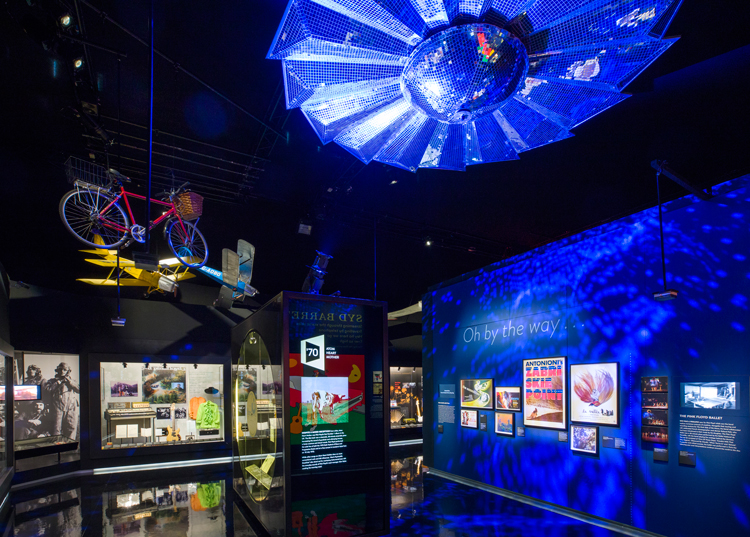 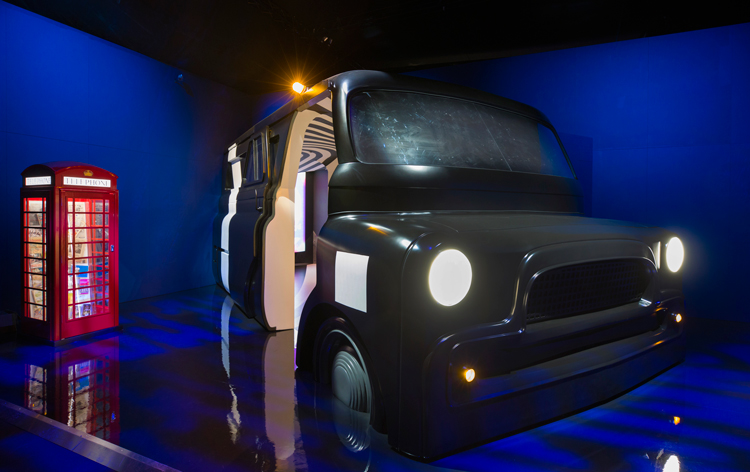 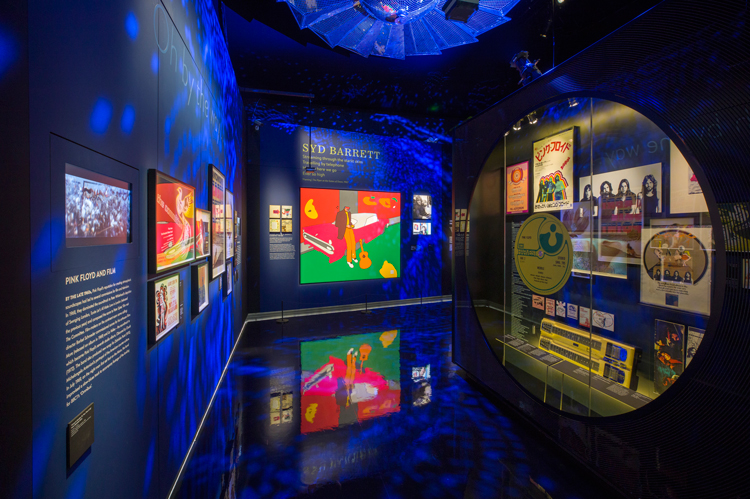 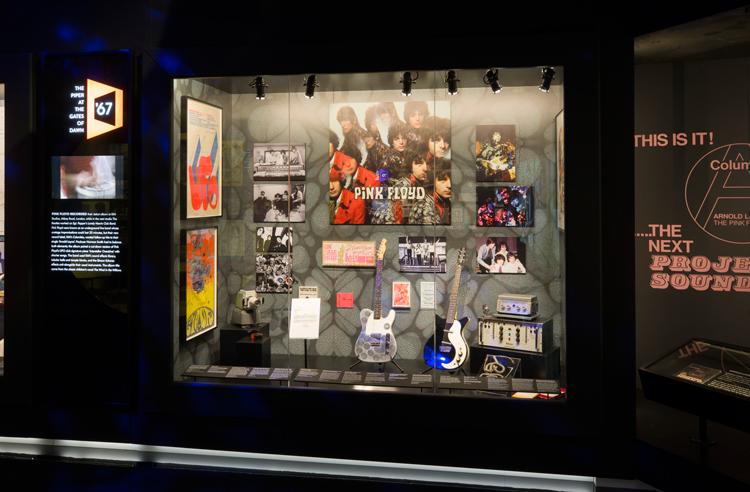 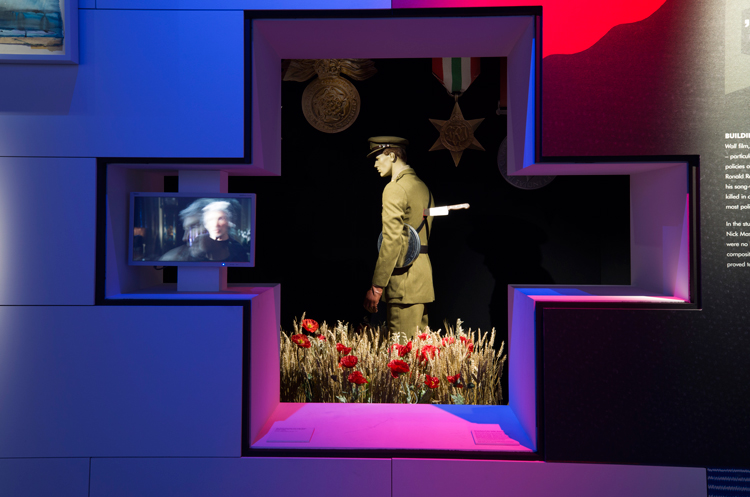