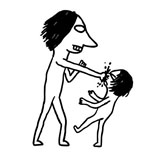 Digital moving image festival Onedotzero has expanded its line-up this year to include more categories and one-off events, as the festival celebrates its ten-year anniversary.

Onedotzero10, which rolls into London’s Institute of Contemporary Arts for ten days, starting on 2 June, will showcase the best in international innovative film, animation and motion graphics. Afterwards, it will embark on a worldwide tour taking in over 60 cities, including Latvia, a new pit stop for the festival.

According to Philip O’Dwyer, art director for Onedotzero, it was important that this year’s festival was not too retrospective, but that it look to the future, championing the Onedotzero entity itself, while at the same time paying homage to the vast network of digital designers, directors and illustrators that has evolved over the past decade.

This thinking is reflected in the festival’s brand identity, which has been designed by O’Dwyer. For the first time, it will be rendered in experimental 3D structural displays that have been developed in collaboration with virtual reality specialist Inition. The final pieces will be used in forthcoming promotional material.

Meanwhile, London-based Intro was commissioned to create the moving image idents for the festival programmes, which make their debut at the summer launch.

As part of the ten-year celebrations, the organisers have also decided to stage a live event at the Hayward Gallery, due to take place on 3 June. It will support the gallery’s forthcoming exhibition, Undercover Surrealism, on show in May. A one-off large-scale music event is also being planned, but the details are still being firmed up, according to Anna Doyle, the festival’s assistant director.

She also says that additional strands have been added to this year’s festival, ensuring that Onedotzero ‘has its eye on the future and what will be developing’. Face Value is one such new category. It focuses on character design in moving image. Animation studio,12 Foot Six, and French designers Yves Geleyn and Julien Genoulaz are showcasing short films in this category. 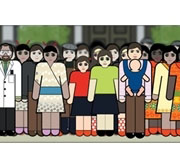 Terrain is another alternative strand, which broadens last year’s graphic cities programme to include evocative interpretations of all types of environments. Film-maker Richard Fenwick and Alex Chandon have both created short pieces, which will be aired in this category. The festival has also developed its documentary group, a category first introduced in last year’s event (DW 17 March 2005). Given the title Perspectives, it presents digitally-created documentaries that pose alternative models for factual filmmaking.

At the same time, the festival will also see the continuation of its long-running categories, such as Wavelength, which presents work from various promo directors, and Wow & Flutter, displaying graphic-led short pieces. Japanese category J-Star shows music promos, commercials, short films and graphics made for the Japanese market.

Included in the line-up for this year will be a short film created by Italy-based animator Alessandro Pacciani. The horror film fuses contemporary animation with oriental philosophy. The festival will also screen a selection of the organisation’s projects made as part of its education initiatives.

• Tours over 60 cities worldwide, following the London event in June