Eduardo Paolozzi’s designs for his London tube station mosaics, which were at the height of a demolition controversy in 2015, are set to be auctioned in Edinburgh. 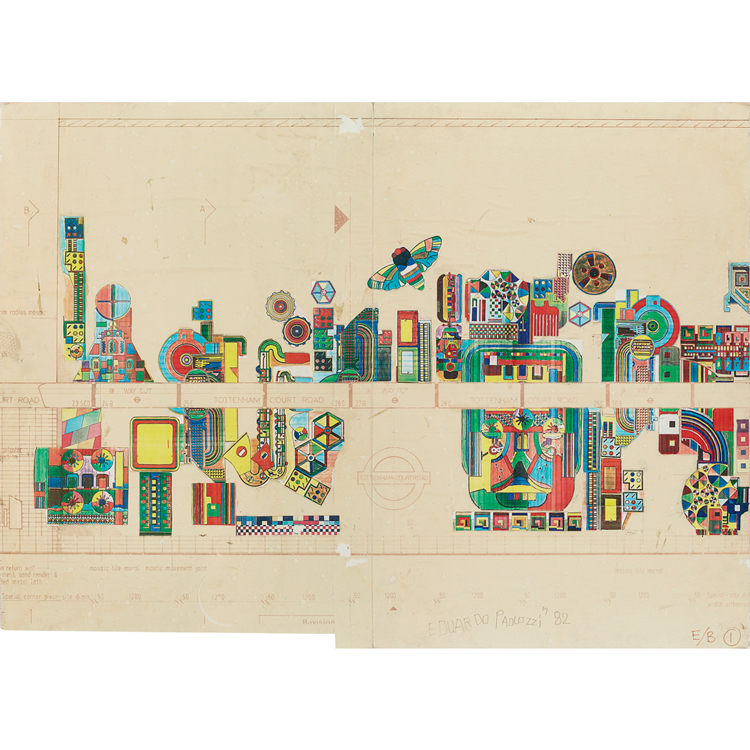 The print designs for the public artworks are going for £20,000-30,000 each, and will be sold at Lyon & Turnbull auctioneers in Edinburgh as part of a Contemporary and Post-War Art sale. The mosaics will sit alongside other pieces from the late Scottish artist such as ceramic sculptures of a head and a crocodile.

Mosaics were removed in station renovation

Paolozzi’s multi-coloured mosaics were commissioned by London Transport in 1979 and installed at Tottenham Court Road tube station in 1986, but some were removed and dismantled in 2015 when the station underwent reconstruction.

Over 8,000 people signed an online petition to save the artworks, and they were then restored at Edinburgh University, and later moved to Edinburgh College of Art – where Paolozzi was a visiting professor – and were used in teaching undergraduates.

This includes saxophones and musical notes to represent Denmark Street’s jazz community and musicians such as Pink Floyd, cameras and electrical circuits to show the technical stores of Fitzrovia, and Egyptian and Assyrian symbols to depict the British Museum.

They also draw resemblance with Paolozzi’s collection of other works, such as his colourful prints and tapestries, and feature motifs from these pieces such as tribal masks, spacecrafts and robots.

The Contemporary and Post-War Art auction takes place on 17 August at 11am, at 33 Broughton Place, Edinburgh EH1 3RR. For more information, head here.