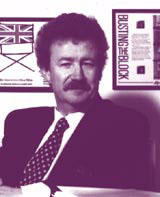 Traditionally, there is no love lost between creatives and researchers. Such different personalities, such different methods of problem-solving. Some put it down to the left brain against the right. But that is old news.

This was the case long before Professor Sir Christopher Frayling’s Design in Business Week speech last October, in which he took the step of condemning research as one of the heresies of the design industry. Though not quite ‘Axis of Evil’ material, these were strong words. So why is research so often seen as the destroyer of the creative process?

Wendy Gordon, who heads the research team at creative strategist The Fourth Room, thinks she might have part of the answer. And the research industry, she acknowledges is partly to blame.

Gordon traces the problem back more than 20 years to the way research has actually come to be used in the creative industries.

‘When I first started working with ad agencies in 1979 there was a whole new breed of qualitative research coming into being. The whole thing then was – how can we connect the creatives and the creative process better with real human beings?’ she says.

Back then, research was a much more extensive function, that tied in closely with the creative, recalls Gordon. It would be brought into the creative process at three key stages: first, before a strategy was developed to inform creative ideas; second, to test a couple of strategic alternatives developed on the back of the first stage; third, the creative idea. The results, she says, were good.

‘It was pretty successful. It did help ad agencies and clients feel they were creating more effective campaigns based on what people thought and felt,’ says Gordon. But then the marketing services sector was hit by a blow that changed the use of research forever. The result was effectively a wholesale downgrade of the discipline.

‘As we hit recession, these three stages quickly condensed into one,’ says Gordon. ‘Agencies wouldn’t pay for the three-stage process and neither would clients. What you tried to do in the space of one group discussion was work out what was going on, what the potential strategies could be, and evaluate some ideas that had already been conceived,’ she adds. It was clearly all too ambitious.

As a result, throughout the 1990s qualitative (non data-led) research, became synonymous with the focus group discussion, says Gordon. This condensed approach to research saw too many agendas on the table at once. The research function never fully recovered as a creative force.

Nowadays, Frayling’s view probably sums up the attitude of many creatives towards research. The problem is that Frayling and others only seem to experience ‘research’ when it is killing their ideas. Gordon is sympathetic.

‘Using research to evaluate design is the problem. However, it should be used as part of the journey to understand,’ she says. ‘As soon as a consultancy is involved, a project has already moved into the implementation phase. Implementation is about evaluation, not exploration,’ she says. The point is key to her thesis.

She feels that by using research to inform client and consultancy-side creatives at the start of a brief, and by uniting design and research thinking at the investigation phase, she can begin to change a few perceptions about research.

But proving the creative case for research means adopting a radical stance about how and when research is to be used. Gordon describes her approach as ‘designing and interpreting research that enables companies to connect and re-connect with their customers’.

Focusing on fundamentally understanding customers and their needs, she suggests, is key to developing business strategy and company growth. Her goal is to elevate the status of research to a discipline that ‘brings companies and brands face to face with real people, in real contexts, in the real and changing world’. Key to this, she says, is the thirst for knowledge – curiosity. But there is still a long way to go for this thinking to be more widely accepted.

It will take a huge process of education to alter battered perceptions from the creative side of the fence, as well as redefine what research means and how it should be used by clients. But Gordon has a few ideas about how qualitative research, when used well, can fuse with traditional creative disciplines.

‘If you could get creatives to think of researchers as being intuitive – tapping into the experience that they have with people – they would find the whole thing makes sense,’ she says. She has experienced this first-hand, having worked closely with Michael Wolff.

At last year’s Design in Business Week, Frayling also voiced concern that design is too often used for the quick-fix, rather than as a strategic tool. So it seems to be with research. Could it be that Gordon’s story is not so different from Frayling’s?