Until now, Photoshop has only been available to use on a desktop computer – but Adobe has announced this week that its product will be available for use on the iPad, then later other touchscreen tablets, in a bid to give designers more “freedom” when working.

Photoshop for iPad will have all the same capabilities as the program has on desktop, including the ability to open PSD files, and will feature the layers panel.

It also has the same pixel grid as the software does on desktop, meaning it can work to as high a resolution, and allows users to create over 200 layers in one document.

The update aims to encourage “multi-device creativity”, says Adobe, by allowing designers to work across many devices and in different places such as when travelling. They will be able to save their work completed on iPad to the Creative Cloud, then continue it on a desktop computer later, and vice versa.

“Freedom” to work away from computer

“The common [idea] is that this gives creatives the freedom to work away from desktop, and be un-tethered to a [computer],” says Jenny Lyle, senior product manager at Adobe Photoshop. “When you think about being creative, the physical space is a huge part of that. [People think differently] when they’re in production mode, compared to when they’re taking a walk in the park or watching a film that inspires them. [It’s about] mobility.”

Lyle adds that applying the design software to a touchscreen device aims to make Photoshop more “accessible” and less “intimidating” for budding designers and those who want to try it out.

“We’ve done user testing with groups in high-school who are mobile natives, and they’ve been using Photoshop on a desktop computer for one hour a day,” she says. “They say Photoshop is intimidating, but playing with it on an iPad makes it more approachable to learn or work with.”

Touching a screen is “more intimate” 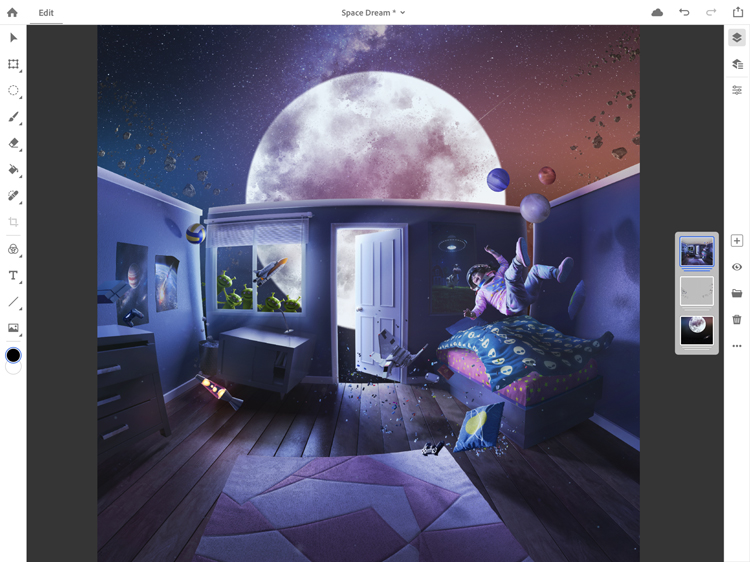 When asked by Design Week how she feels the iPad will change how designers work with Photoshop, she says that the update aims to make using digital design software more tangible, tactile and emotional.

“The touch element has made [designers] feel closer to their work as it feels more intimate,” she says. “They’re not working through a keyboard or mouse that’s separated from a screen, they’re working on a canvas, which they can put their hands on and play with.”

The announcement comes as a series of other updates have been announced for Photoshop, both on desktop and iPad.

Designers can also now undo mistakes or go back through their work step-by-step; the “undo” shortcut action of pressing “command/control-z” on the keyboard has been applied to Photoshop, meaning designers can revert through previous actions.

Resizing images to proportion has also been simplified – designers need not press the “shift” key to keep an image in proportion while they shrink it anymore as free transform is now proportional by default. This means users just click from the corner of the image and drag without holding down “shift”, making the image smaller or bigger to scale as they wish. 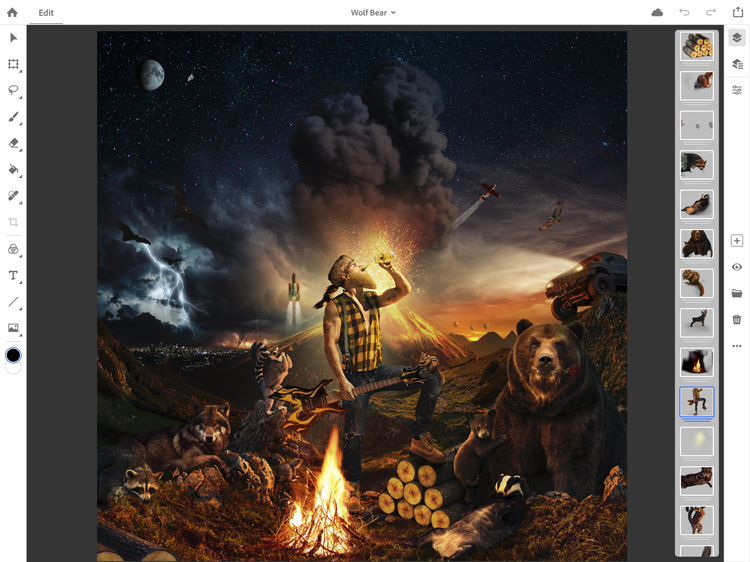 Adobe’s artificial intelligence (AI) robot Sensei has also been put to use to make selecting and cutting out subjects (people, animals, objects or anything specific) in images simpler – now, rather than having to physically click around the whole object in dots to make a selection, just clicking a few times will enable the AI to figure out what the object is and make an automatic selection for the user.

The Photoshop software updates for desktop launch immediately. Photoshop for iPad is due to launch in 2019 but Adobe has not yet specified in which month.

Following the launch on iPad, Photoshop is expected to launch on other touchscreen tablets such as Android devices, as part of a “long-term strategy”, according to Adobe. The company has not yet confirmed when this will be.