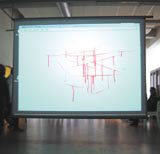 Watching trends is like watching waves. Sometimes there’s a big wave that stands out from the rest, sometimes there are waves within waves that have an independent rhythm and while they don’t ever reach a peak, they are no less powerful.

I visited an exhibition on Sunday at 4:44pm – the fourth day of the fourth month of the year 2004 – called Neen Today. The reason I dragged myself from London to sleepy Eindhoven, to stretch the wave metaphor, was to witness a swell that started to form along way from the beach. In short, it felt like by the time this one breaks it will be very big and important, the kind of thing people will come a long way to be part of.

The show was staged by Neen, a multidisciplinary team of creatives and artists, from digital media specialists to graphic designers to musicians (www.neen.org). The opening date for the exhibition was no accident. The group does not gather easily around specific themes, style or craft, which is unusual for people working nearly exclusively with interactive media. Rather, Neen’s uniting principle is a staunch adherence to the naÃ¯ve as opposed to the complex. It values meaning over execution, freedom over conservation and above all it shows a total commitment to playfulness and the right to reject the inherited rules of the interactive creative space.

I became aware of Neen through one of its members, young graphic design graduate Rafael Rosendaal (www.newrafael.com). Some interesting pieces had emerged through the pipeline: the website where you can pop the encroaching clouds (www.whywashesad.com) or one where by pulling a finger you make a fart sound (www.misternicehands.com). Rosendaal has even designed a new website for the show, www.fataltotheflesh.com where you can cut the page, leaving bleeding gashes across it.

Neen, as legend has it, was launched by artist Miltos Manetas, who tasked a New York branding agency with finding a name to serve as the vehicle of his manifesto. After settling the $100 000 (£54 000) bill, the name Neen was born. Manetas then set about finding staff, Neensters. This wasn’t by recommendation, as most of the individuals were previously unrecognised. He wanted to work from a blank canvas. But somehow people surfaced and despite different modes of working there is a strong thread of continuity, routed back to Neen’s fundamental purpose.

The group today has a huge audience, people who’ve never heard of Boo, Razorfish or Deepend but are tuned in to the Web. Those who’ve been involved in the Web’s development over the past few years have become jaded and comfortable in the thought that it’s all been done now, that there is no ‘new’ in new media. Yet this group of creative people is discovering the essence of interactivity all over again.

The body of work associated with Neen both in the show and on the Web is a great inspiration. Technology seems to breed complexity and yet it is also a great vehicle for the simple and the profound. I will be watching this wave as it travels towards the shore.

Fast food slows to a stop