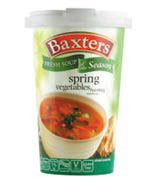 Branding consultancy Wren & Rowe has created the identity and pack design for Baxters Fresh Soup of the Season, a Fresh Soup sub-brand.

‘It’s amazing how much fresh soup is sold nationwide; the figure is going up 30 per cent every year,’ he explains.

The identity work encompassed the creation of a sub-brand name and ‘salad-green colour palette’, which are applied in an on-pack banner that makes use of typography from the existing Baxters’ identity.

‘We tried to emphasise that the vegetables in the soups are all natural and freshly cut, and position the range as closely to home-made soup as you can get,’ says Foulkes-Arellano.

He adds that the group deliberately avoided ‘complex pack design’, because the soups will be rotated on a regular basis.

The range kicked off with a Spring Vegetables variety, which will be replaced with a more seasonally appropriate soup every three months.

Wren & Rowe won the work in October on the back of its previous relationship with Baxters Food Group. The consultancy was also responsible for the Baxters Fresh Soup redesign in 2002.