Italy is one of the world’s worst hit countries from the coronavirus pandemic. Nearly 3000 people have died because of the COVID-19 outbreak and some 35,000 have been diagnosed with the virus, with the north particularly badly hit. The entire country is in lockdown until April, at the earliest.

As such, there is a heavy strain on hospitals and their medical equipment as the country comes to terms with its record number of patients. Isinnova, a printing start-up, offered what appeared to be a solution to this shortfall for a hospital based in Brescia.

The hospital was taking care of 250 COVID-19 patients in intensive care and had run out of Venturi valves, tubes that connect patients to ventilators. The valves (shown in the above Facebook post) aim to be used for a maximum of eight hours at a time, and cost less than 90p to produce (Venturi reportedly charge around £9,000 for a valve). The prototype, designed at the hospital, took three hours to create.

Issinova’s CEO, Cristian Fracassi told the BBC: “We haven’t slept for two days. We’re trying to save lives.” He is not charging the hospital for the services, and a second hospital has now been in contact.

The need for medical equipment

There is a clear need for medical equipment. Coronavirus is likely to affect supply chains, and as a result, medical supplies. The only unknown is the extent to which that will be limited. In early March, the NHS announced that it has seen an “increased demand for PPE (personal protection equipment) over the last few weeks”.

As well as PPE, respirators and ventilators are in short supply. This week, Downing Street urged the manufacturing industry to “come together to help the country” by helping to make ventilators. Carmakers like Rolls Royce and construction companies such as JCB were contacted.

Prime minister Boris Johnson asked the manufacturing industry to produce up to 20,000 ventialators within two weeks. Vauxhall has now announced it will help with 3D-printing these parts. Airbus, the aerospace engineering company, has also agreed to help. Meanwhile brewery BrewDog has announced that it is using its distillery to make alcohol donhand sanitiser – called Punk Sanitiser – which will be given away for free to local groups and charities.

This type of cross-industry manufacturing is unusual, but coronavirus is unlike any pandemic seen in recent times. And designers from all sectors may play a key role in providing solution. As Emily Penny, a branding strategist who had recently created a door drop flyer, told Design Week: “Any situation like this, designers are best placed to look at problem-solving.”

One way in which designers might be able to come together could be via open source platforms. Nextstrain, for example, allows scientists to share genomic data in real time in what it calls, an “open science” approach.

A Facebook group is attempting to take a similar approach and applying it to product design. The group, called Open Source COVID19 Medical Supplies, aims to “evaluate, design, validate, and source the fabrication of open source emergency medical supplies around the world given a variety of local supply conditions”.

It was founded by Gui Cavalcanti, who is co-founder of California-based robotics company Breeze Automation. Cavalcanti, who has a background in engineering, wrote in a post that while it was set up to design ventilators and respirators, it had become “clear that we’re already short on a ton of supplies, not just respirators”.

At the time of writing, the group has more than 16,000 members. There are posts from members about “printer farms” offering devices to manufacture supplies in a similar way to the 3D printers in Italy. Other have suggestions for DIY respirators and materials that could be used in the development of new equipment. Because of the rate at which the group is growing (more than 4,000 members joined since yesterday), there are now daily topics to organise discussions.

How to act “nimbly” in a crisis 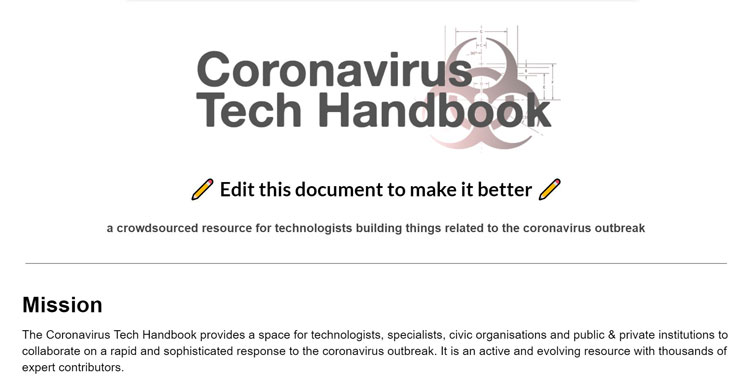 These groups develop quickly and inspire off-shoots within the community. In the UK, residential college Newspeak House has created the Coronavirus Tech Handbook as a way to crowdsource information about the pandemic and share equipment designs. According to a article published by Nathan Young, it is the “ultimate crowdsourced coronavirus handbook”, with “18 editable sections, 100s of projects, 18 chat threads”. It has received over 100,000 views in the last week.

The handbook works on as a Google Doc, and so can be viewed and edited by anyone. Young tells Design Week that it relies on a level of popularity that doesn’t attract too many people, who might edit it maliciously. “We don’t want to be shared by Kanye,” he says. At the moment, Young and his team edit the document as people contribute to it. They have developed two similar handbooks before, but for elections.

There is an engineering section, which has discussions about developing designs for ventilators and other medical equipment and information, such as “hygiene hacks” and DIY facemasks. It is about acting “nimbly” in a crisis, Young says – stressing how collaboration – and crucially access to collaboration – can often yield solutions.

There is a disclaimer at the top of the handbook, which points to a wider issue in open source design: “This website may contain information about medical conditions and treatments. The information is not advice, and should not be treated as such.”

While it is clear that there will be a shortage of medical supplies, there are clear tensions about the practicality about mass collaboration (no matter how well-edited the process is).

Firstly, here are the legal issues (and financial repercussions) of patent infringement. The Verge reported that the makers of medical valve have threatened to sue the Isinnova after its 3-D printed replica. Whether or not this type of legal issue can be ironed out in the time of a crisis is not yet known.

But one of the biggest problems will likely be the regulation and approval of these products in hospitals. In the UK, the body who regulates new medical devices is the Medicines and Healthcare products Regulatory Agency (MHRA). Among its responsibilities are “ensuring that the supply chain for medicines, medical devices and blood components is safe and secure” as well as making sure that all medical devices “meet applicable standards of safety, quality and efficacy”. The MHRA was unavailable for comment.

Young acknowledges the difficulty in this area: “On the one hand, you want to keep stuff safe. But on the other hand, there is technology that needs spreading and we’ve been waiting a long time and there have been delays. And people will die because of those delays.”

While Young thinks the lack of government involvement in the handbook allows it more flexibility and to evolve at a faster-pace, he does believe that the Government could help by “using the document and then to open source and make available its solutions”.

This type of opensourcing could have wider consequences than the design and technology sectors, Young suggests. The UK government this week changed its stance on social distancing and school closures, after a period of not following other countries’ lead and instead encouraging ‘herd immunity’. “Government could have open sourced its models, and said ‘tell us what you think’, and the scientific community would have come back with responses,” Young says, “and that might have changed the UK’s course earlier.”

A ride-sharing vehicle designed to fix the “Uber Pool problem”