D&AD has revealed the 58th edition of its annual, which has been published in a digital-only format for the first time.

Designed by Rotterdam-based Studio Dumbar, this year’s annual is available internationally and can be accessed for free.

This move will allow the organisation to better fulfil its priorities, according to D&AD. These include reaching more diverse audiences and cutting down on its carbon footprint.

D&AD 2019/20 president Kate Stanners says: “The 58th annual will be the most accessible annual ever, creating an exceptionally rich experience for the global creative community.”

The annual complements D&AD’s yearly awards and showcases winning content. This year’s awards were held virtually because of the pandemic.

Over 1,000 pieces of winning and shortlisted work are available to view in the digital annual. These can be organised by a variety of criteria, from award level to discipline.

Individual agencies and studios are available to read through as well. There is also a “randomiser” button which selects different projects at random for readers.

The digital annual retains many of the print edition’s features, such as a showcase of past Black Pencil winners (the highest award available) and a Hall of Fame.

This year’s annual also seeks to take readers behind the scenes of the judging process with 46 videos of panel discussions, judge interviews and behind the work sessions with this year’s winning creatives.

Among the themes are “Addressing Women’s Perspectives” and “Digital Crossover Culture” which looks at the creative work “gamifying issues”.

Studio Dumbar tells Design Week that designing the D&AD annual is “an absolute prestige project”. The project was led by Christopher Noort and Stan Haanappel.

The guiding principle, according to the studio, was “exploration”. The grid is designed to show a new order every visit which means that the “annual does not only serve as a complete archive but as a source of inspiration”.

The studio hopes that the interface strikes a balance between “feeling overwhelmed by the amount of great work” while also providing a “practical and surprising way” to navigate the content.

The team was influenced by apps like Instagram and Tumblr – interfaces which allow people to “easily open and close content” and also “scroll endlessly and discover new things”. 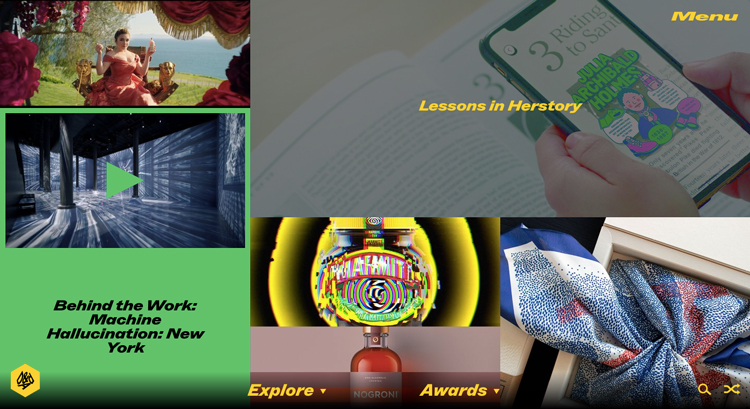 The editorial design is an extension of the visual identity for this year’s D&AD festival, “Imagine Everything”, also designed by Studio Dumbar.

The “cornerstone” of this identity was the variable typeface Marfa from Swiss foundry Dinamo, the studio says.

“The typography shifts, expands and stretches, expressing the limitless scope and adaptability of human imagination,” the studio adds.

“Combined with the opening up of the image grid that was used for the online award show, it gave us a great starting point to create something special.”

“The digital annual cannot replace the physicality of the printed one”

The design team says it is “very well aware that the digital annual cannot replace the physicality of the printed one”.

Its “core functionality” can be recreated, however – “creating a platform for creatives to showcase their award-winning work and let people be inspired by these projects”.

Designing for a digital publication also creates other advantages, according to the studio, such as the increased video content, motion design and audio on display.

Each project also now gets the “same amount of space and attention”, the design team says, while users are more in control of the content they want to see.

The future of the annual

Speaking to Design Week, D&AD awards director Donal Keenan says the digital format makes sense as a majority of the showcased content is animation or video.

Keenan adds that the organisation has thought about creating a digital version of the annual for a while now, though it will “welcome feedback” about the new format.

Past editions of the annual have been designed by a studio each year and how this tradition will continue will continue is currently uncertain, according to Keenan.

You can read the digital annual here.