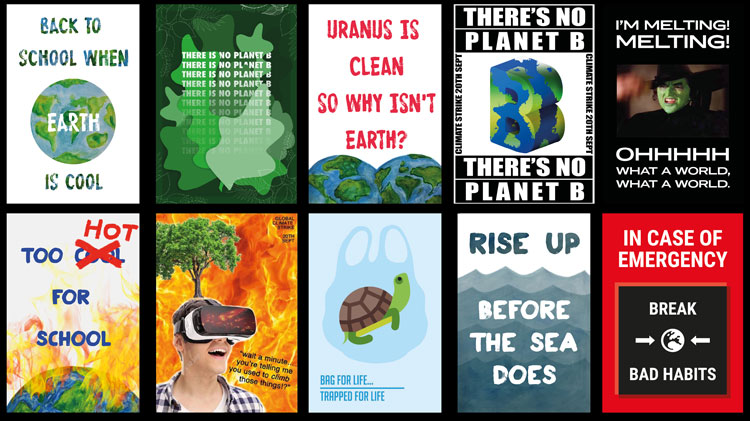 Glug — a global community of around 50,000 creatives — has unveiled a database of protest posters, in conjunction with Global Climate Strike week.

The week begins 20 September 2019 with a strike organised by the UK Student Climate Network (UKSCN), a student-led environmental organisation. Students are encouraged to strike from a day of school and take part in climate marches.

Glug’s campaign, named #ProtestByDesign, asked designers and those working in creative industries to submit their posters. Protestors can then access these designs and download them free of charge.

Users can also submit their own designs to the online resource. A judging panel — including the director of Tate Modern, Frances Morris and photographer Rankin — will pick out winning designs.

One motivation of the database, Glug’s CEO Pete Bowker says, is to allow those who cannot take the day off to march to take part in the protest and increase engagement globally. Anyone can download designs and share them on social media to raise awareness, for example.

Bowker says: “We want to support these young people as much as possible.

“There are an estimated one million people turning up, but those million aren’t necessarily designers. We have designers, so we wanted to see if we could create a substantial database.”

The posters take a witty approach to the climate crisis, which is important for the message’s impact, Pete says.

He adds: “Designers are using humour, colour and typography to make their point — all the things they use to sell a lot of stuff that isn’t helping and turning it around to sell a positive message instead.”

On the day of the protest, attendees can pick up posters at London’s Tate Britain where the march starts. Tate Modern has also put 100 of the designs in their permanent archive.

Clear Channel is displaying 156 poster designs on its billboards across the UK, with an estimated reach of 90,000 people, on 20 September 2019.