“New York is an entity unto itself,” Jesse Reed tells Design Week. He’s specifically talking about the graphic design scene in the densely populated US city, which around 8m people call home. “On the West Coast, which is more entertainment based, there’s effect and depth and texture. Here’s more sleek, black and white. It’s clean, flat design.”

What might drive this more “Modernist-influenced” design? Reed points to an East Coast editorial aesthetic and the city’s fast-evolving restaurant culture as influences. But perhaps the key element of the city’s graphic scene is its sense of time; the way it looks to the past to style its future. That’s the driving influence at Order, the studio he set up with Hamish Smyth in 2017.

The co-founders were both partners at Pentagram’s New York office before they set up by themselves. As part of the transition, they also established independent publishers, Manuals Standard, which aims to preserve design history by looking at old systems – like a NASA manual or the city’s Subway – and reproducing it in books which are available to buy. At the design studio in Greenpoint, Brooklyn, there’s a small book shop at the front of the office where a curated group of graphic design books can be bought. The interiors, much like the design style that Reed is talking about is clean, minimal, sleek.

When a project comes in, the team always looks to the heritage of the company. And if it’s a new company, they’ll look at the heritage of the relevant industry; for a banking start-up, they might look at the history of currency, for example. The studio has a no Pinterest policy; it asks brands to look at “who they are”, Reed says. It’s an attempt to view an identity as ongoing; at no point is a company’s identity complete or finished. It also helps them avoid chasing trends and looking the same as other brands. 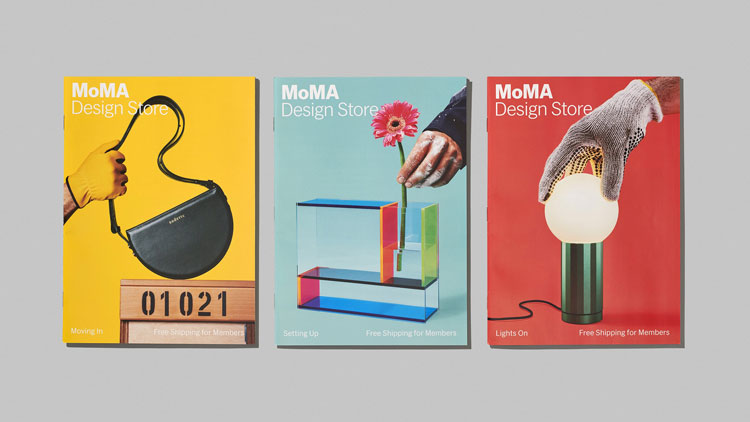 Clients include Kickstarter (which is four blocks away), Gage and Tollner (known as the ‘most famous restaurant in Brooklyn’) and a sense deprivation tank company that is opening nearby. The proximity of projects gives some clue to New York’s village-like atmosphere. Reed says that one of its strengths is how much there is going on in the vicinity; companies who know the Standards Manual books come in.

Last year, the Museum of Modern Art (MoMA) expanded its site with 40,000 square foot of new space. Order created a new design system for the gallery. The studio’s interest in heritage is apparent in the branding; the logo is based on an interpretation of Franklin Gothic, the typeface used by MoMA since the 1930s. The bold weight of this font was recommended as the primary typographic voice of the museum.

Looking into the heritage of a brand can also bring up some more “unsavoury” elements; society and its values change, and a contemporary brand identity probably would not align with values of the same brand 100 years ago. That’s part of the “fun” though, Reed says: “There’s always going to be baggage.” “Baggage” is not unique to New York, though Reed does say that the local design community – which is “smaller than you’d think” – can be quick to judge.

“In New York, it’s not competitive in that everyone’s trying to knock each other out of the game,” Reed says. “But designers in general can have a really judgmental side to them. And why is that? I suppose, as designers, you are asked to literally judge things – what’s good or bad. But we could be more supportive of each other.”

Meaning and making in modern design

Margot Bouman, assistant professor of visual culture at Parsons School of Design in New York, says that the city’s landscape naturally forges these “intense creative communities”. “It becomes cliquey,” she says. “Once you’re in, you’re in and it can go well. But getting in there is the difficult part.” She talks about “tensions” in the city and just how densely populated is; Bouman calls this “stacking”. New York has little space. While it has a roughly comparable population size to London (8.6 million to 8.9 million), its actual land mass is half (780km2 to 1,572 km2). While Reed spoke of community judgment, Bouman says that it can mean they become “hyper-focused” and that when small sets of people are “deeply engaged in artistic practices”, it can be “really extraordinary”.

Whatever the advantages and disadvantages to New York’s creative scene, getting an education is an essential part of taking a shot at it. In the autumn, Bouman is launching a new course at the school which “intentionally and methodologically foregrounds design in an academic setting”. The Bachelor of Fine Arts in Design History and Practice at Parsons is an “interdisciplinary experience” which teaches art and design through “text-based and material analysis in studio and seminar classes”. 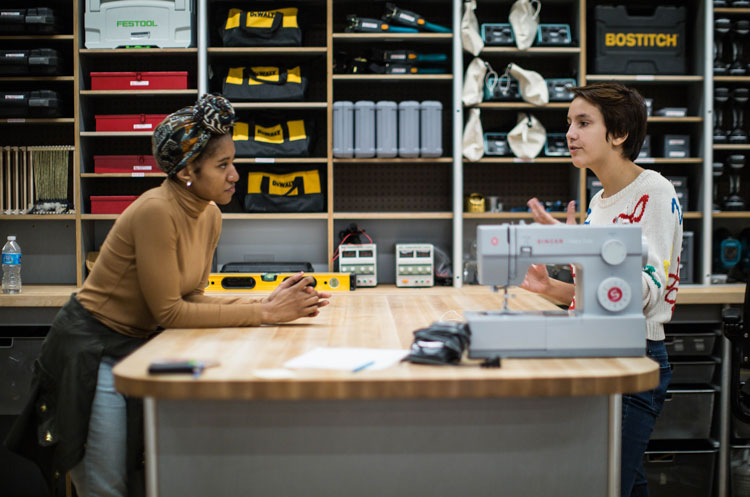 The course mixes the intellectualism of a Liberal Arts degree with a professional slant. There’s a professional development class that asks students to think about how they’d apply their studies in a studio setting, for example. This model evokes Germany’s, which focuses on practice and theory – a dual-focus that is often credited for the European country’s strong design landscape.

“Practitioners will have a more abstract, multi-applicable degree,” she says. They will also have access to Parsons’ facilities – including a full-size 3D printer, workshop ‘hubs’ and other high-tech facilities of the recently-opened ‘Making Center’. Bouman hopes that the mix of academic learning and professional development will change the “perception” of Liberal Arts degrees. And like Order studio’s ethos, it also seeks to equip designers with an historical context of their industry.

Bouman says: “Say you have a student who graduates who works in fashion and they get a minor in global studies – you have a much more nuanced understanding of how to work globally, and across social groups and countries, and larger contexts and costs to bring to your work.” She hopes that her new course will create that kind of nuanced design graduate.

“We lack a culture of design in the US”

There’s no central design body in America – like the UK’s Design Council, for example – but there is WantedDesign, which organises and promotes design with a focus on New York. It was established by Odile Hainaut and Claire Pijoulat in 2010 as a way to bring together the international design community in New York. The duo were awarded France’s Chevalier of the Order of Arts and Letters (the country’s highest honour) last year for promoting the US-French relationship. Now there’s a whole suite of events, including the annual Launch Pad, which supports emerging designers.

Its founders explain to Design Week that a “lack of culture of design in the US” drove them to create WantedDesign, whose aim is to “elevate the conversation around design”. “Designers in the US have to be entrepreneurs and either become manufacturers or expand their network beyond the US and work internationally,” the co-founders say.

“We wanted to create a new kind of trade show with the intention of connecting the designers, manufacturers, museum curators, students and the industry at large in a new event,” they continue. “It has a more humans scale, it’s very curated, with their story versus the products.”

It started with one even in Manhattan in 2011, and launched a second event in Brooklyn in conjunction with an official design week by the city, NYCxDESIGN. WantedDesign now has a five-day festival at Industry City in Brooklyn, as well as WantedDesign Manhattan. The organisation hosts events across the city all year (and internationally).

That series of event is evidence to what Bouman, Reed and WantedDesign’s co-founders have all said about New York: that there’s a sense of possibility and trying things out. Like setting up a design studio with an independent publishers, or creating a new education course, or a series of design events.

Besides, a lack of infrastructure has been good for some unexpectedly good design consequences, according to Hainaut and Pijoulat. “New Yorkers make things happen; they have to,” they say. “If they can’t find a manufacturer to produce their piece, they’ll make it themselves.”