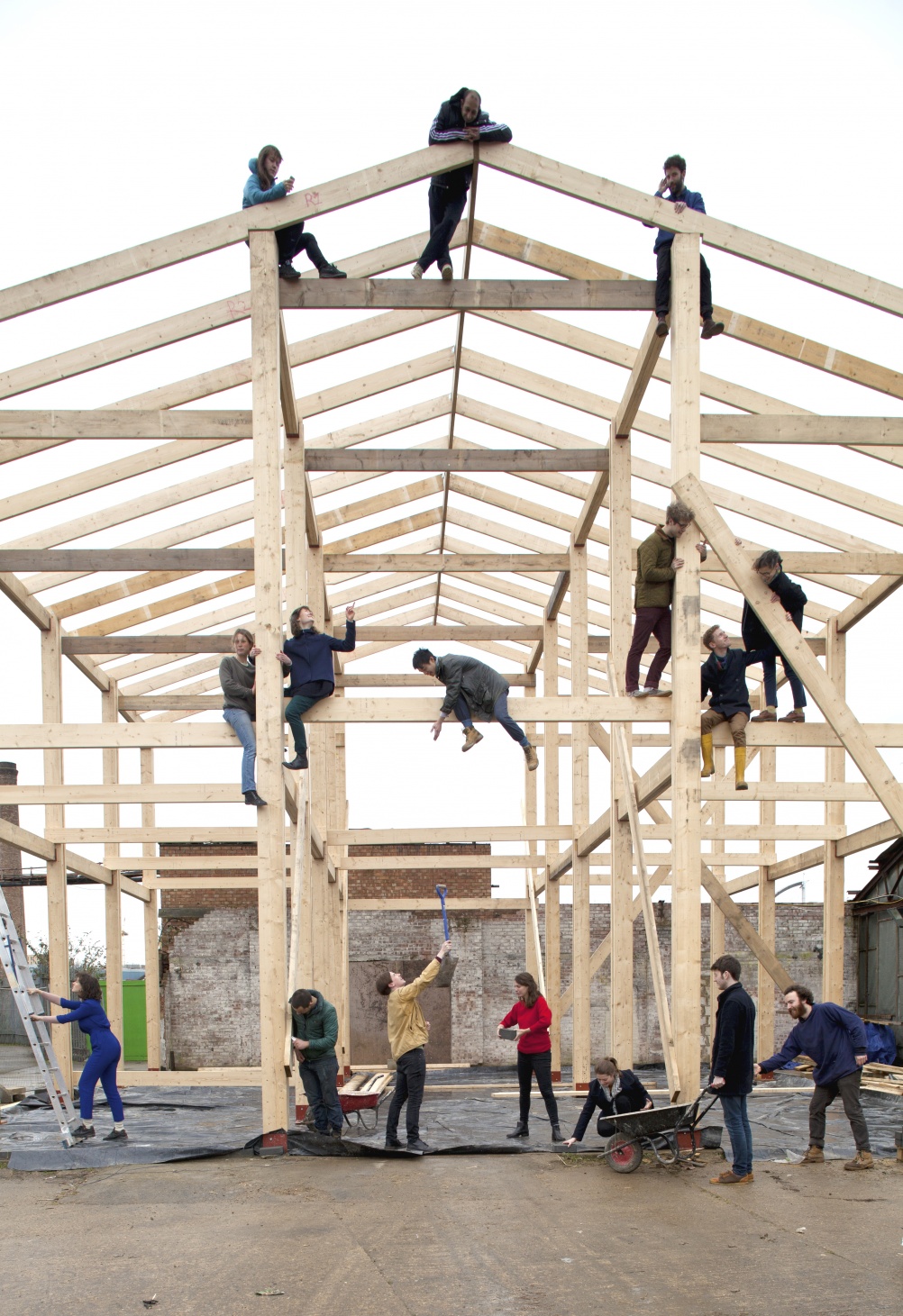 Design and architecture collective Assemble is made up of a team of young, inventive creatives who look to transform social spaces. The Turner Prize-winning practice combines imagination and resourcefulness to reinvigorate public areas with installations that are both playful and beneficial for the community.

Their work includes turning derelict petrol stations into outdoor cinemas, creating Brutalist-themed playgrounds for children and reinvigorating community housing that was previously set for demolition. Following their talk at this year’s Indaba design conference in Cape Town, Assemble members Paloma Strelitz and James Binning tell press about how their team works, the need to involve the community in their process, and why they don’t see themselves as “artists”.

Why is it important for design and architecture to have a social purpose, and play a bigger part in people’s lives?

Paloma Strelitz: It doesn’t need to have a social purpose – but an analogy that we use is that the architecture is more about the people sitting around the table than the space that they’re inhabiting. Fundamentally, without people, I think we feel that it’s often quite meaningless. We are really personally interested in projects that combine formal design with approaches to living and dealing with issues we find engaging.

James Binning: You can look at a situation like the houses in Granby and think that the best idea is just to demolish everything and rebuild it. We look at that outcome and think that’s not the best option, but that’s not necessarily just a social thing, it’s also material and cultural. Many of the projects we do are quite close to home – affordable workspaces and housing are both issues for us too. It’s not explicitly about a social agenda in design – it’s about what we think is of value and how we can use our skills to provide it. Sometimes, that’s looking after a building and trying to come up with a strategy to do it.

How do you work collaboratively, and what can designers and architects learn from each other?

PS: At the start, we were all involved in every stage of a project. Now, most of our projects are managed by two people who are interested in doing that piece of work, and normally they will have the requisite skills to address that. Sometimes those skills are practical, or they’re more about areas of interest or knowledge. Our work is quite broad, and the real benefit of working with people from other disciplines is we’re able to take on work that we wouldn’t otherwise be able to do. We’re also in a much better situation to ask those bigger social questions. It means we’re having a very broad conversation of ideas and responses.

JB: Nobody in the practice is formally an architect yet, and none of us would have self-described as artists a year ago. It means people approach you in a very different way. People talk to you differently if you say you’re an architect – they’ll have a different perception of you, what you’re going to produce and how you’re going to listen to them. New Addington had had enough of architects – so we were just enthusiastic, young people who were going to keep busy for a year. This versatility and ability to be chameleonic enables us to work in a more flexible way with different clients. If we were an ‘architecture practice’, there’s no way that people would let us build the things we have. People have placed a lot of trust in our ability rather than coming up with preconceptions – and I think we’ve been very fortunate of that.

What can you do as a designer or architect to keep your work accessible to people from different backgrounds once it’s left your hands?

JB: Frank Gehry’s Easy Edges cardboard chairs cost him £10 each to make and he sold them for £15 – now they’re worth £2,000. I don’t think there’s any way you can control something once you put it out there in the world. That’s why we try to have a more holistic role in projects, and shape the brief that lands on our desk. We try to be involved in projects at the earliest possible stage. For example, with our Granby project, the products will continue to be made. Hopefully that’ll mean they don’t become completely inaccessible as artefacts.

PS: Architecture means you’re creating spaces for people to inhabit. I’m currently excited to be working with Goldsmiths university to create a new art gallery for them – that’s going to be a public resource. These projects are really exciting testing grounds for materials and new ideas, and if they go on to have a life in someone’s private home, I’m very happy with that – as long as you’re also doing work for everyone, whether that’s a gallery space, a public square, a playground or a street of houses.

You seem to have quite a lot of freedom over work you choose – how do you decide which projects are right for you?

JB: An offer will come in and if two people in the office are interested we’ll take it on – that’s it really. There’s a discussion about whether they have the time and capacity, but if people are interested in it, then they can do it. It gives us flexibility to do things like teaching or taking on other work that’s contributes to the practice in terms of broader research. It enables us to pursue different things to benefit the group.

How competitive do you find the field that you work in? What is your process of pitching like?

PS: It’s very dependent on the situation. Professionally it can obviously be competitive but beyond that I think it’s an incredibly supportive, friendly, communal profession. Everyone’s got endless friends who are architects and I think that’s part of what that makes it a rich and interesting work life – there’s lots of people engaged in issues. I think part of the reason we’re really interested in self-initiated projects is that we feel in the traditional, tender process, the architect comes to the table too late, when all the critical decisions have been made – there’s then very little scope within that to revaluate some of them and ask more critical questions. The ability to have conversations with people informally and develop projects incrementally means you’re able to be much more responsive to their real needs and desires.

Do you think urban areas in the UK are in danger of losing inventiveness as more sites are turned into generic housing and property developments?

PS: There are different issues across the UK – in London, there’s an increasing lack of space, in Glasgow there’s too much space. We’re aware of the conversation that the real estate market in London threatens to drive out everything that isn’t private homes, including things that we all value like spaces for production and for culture. These are spaces for a wider demographic of people that combine to make a really exciting city. We’re very interested in projects that support those spaces.

Do you find that authorities and local councils willingly approach you to revitalise public spaces?

JB: Having been dealt a soccer punch with austerity measures in the last couple of years, authorities have had to come up with some very innovative ways of providing services. They’ve begun to understand that the traditional tools used to create jobs or affordable workspaces aren’t really viable anymore. Some of our projects have played a part in these conversations. I think councils are very inventive in finding ways of generating beneficial outcomes with more limited means. It’s forced them to be more resourceful as well as made them come to people they might perceive as more resourceful – like us.

Do you find yourselves engrained within communities, or do you think of yourselves as separate – as designers or architects doing a job?

JB: We don’t suddenly become one of the community through doing a bit of work with them but I think we all really enjoy what you get out of being very invested personally in a project. There’s not the same professional distance you have in an office when somebody can take you off a project at any moment and put you on something else. When we sign up for something, we’re making a personal commitment to see it through – it’s quite a big personal decision for us. We’ll know it’s going to take a year if it goes well, or three if there are delays. We do work when we’re invested in the place itself.