In March 2015, a month before it launched publicly, investment app Robinhood had a waitlist of around 700,000 people. By 2020, the US-based app had more than 13 million users. Co-founded in 2013 by Baiju Bhatt and Vladimir Tenev, the in-demand app offers commission-free trading in the hopes of levelling the financial playing field. “We’re on a mission to democratize finance for all,” its mission statement reads.

To meet its growing popularity, Robinhood revealed a new visual identity last year – a brightly-hued illustrative approach across all of its products, designed by New York-based studio Collins in collaboration with Robinhood’s internal design team. “We approached the project as reframing a driving need faced by Robinhood’s millennial audience – one they often don’t recognise or grapple with – into an unignorable opportunity,” Collins head of strategy Taamrat Amaize says. 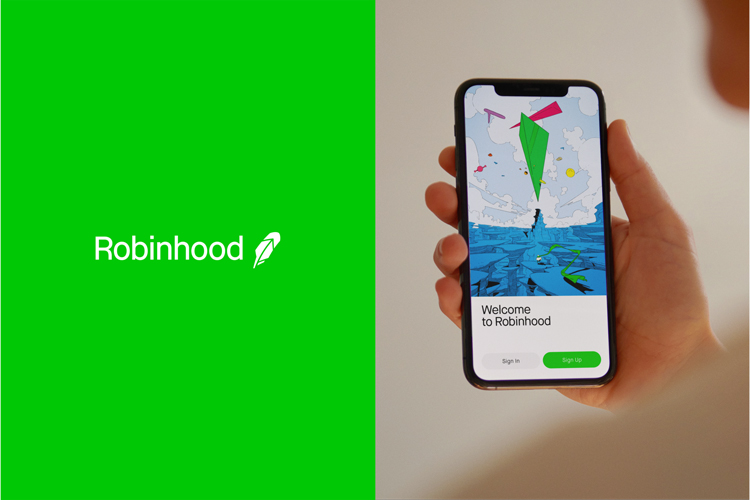 More specifically that audience comprises the “younger generations, marginalised populations, and those groups who have been side-lined from American financial engagement”, she says. Strategy has played a key part in the success of Robinhood, which exists in a complicated field.

Investment is often seen as complex and cut-off and while Robinhood’s democratising of wealth creation may be appealing in concept, engaging with an audience is a different matter. “The reality of human behaviour tells us that people may know what they need to do, but that doesn’t mean they’ll do it,” Amaize adds. “What does spur you into action is knowing why you need to act.”

The new strategy centred upon power. “The act of engaging and participating in a system gives a person the ability and chance to shape outcomes,” Amaize says. “And isn’t that the very nature of investing? To invest is to imagine a brighter future.”

Robinhood’s position shifted from “financial services” to a “financial advocate”, she explains. “By actively participating in the financial system, they are exercising their power, the same as in any system – like voting in a political election.” This vision influenced the visual work, which sought make the financial system more relatable. 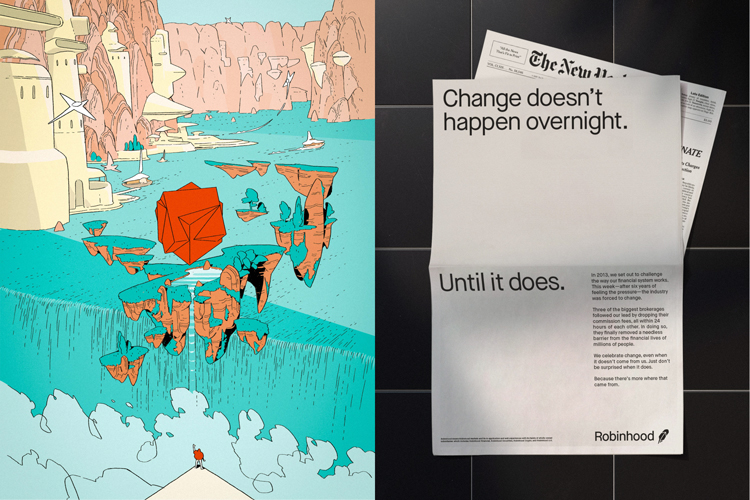 Collins creative director and partner Ben Crick says that Robinhood’s product is an antidote to the “intimidating mechanical experience of investing”. “Where traditional interfaces look something like an airplane cockpit – overwhelmingly complex with little hierarchy, designed for those already in the know – Robinhood’s app eases you into the experience,” he says.

Crick describes the interface as a “self-motivating journey of discovery” where information is only revealed when “contextually relevant”. “The more you interact, the more your curiosity and thirst for knowledge is revealed,” he adds.

This pared-back UX for such apps is crucial, Intrface co-founder Aaron Humphreys echoes. Humphreys worked alongside an in-house team on the design of Tickr, which bills itself as being for the “next generation of investors”.  While many investment platforms – including Wealthify, Nutmeg and Wealthsimple – have added socially responsible features, Tickr launched around the idea of “impact investing”.

The concept focuses on generating positive outcomes for the world as well as returning on finances: Tickr only offers investments in funds that aim to have a positive impact for people and the planet. You can put money into companies across climate change, equality or technology innovation.

The average age for a user is 31, and 40% of users are female. 50% of them haven’t invested before. “It’s a relatively new concept for a lot of millennials, who were told to put our money into a conventional savings pot,” says Humphreys. Given the sector’s novelty, it was vital that the onboarding process was made as “seamless and short” as possible, he adds. 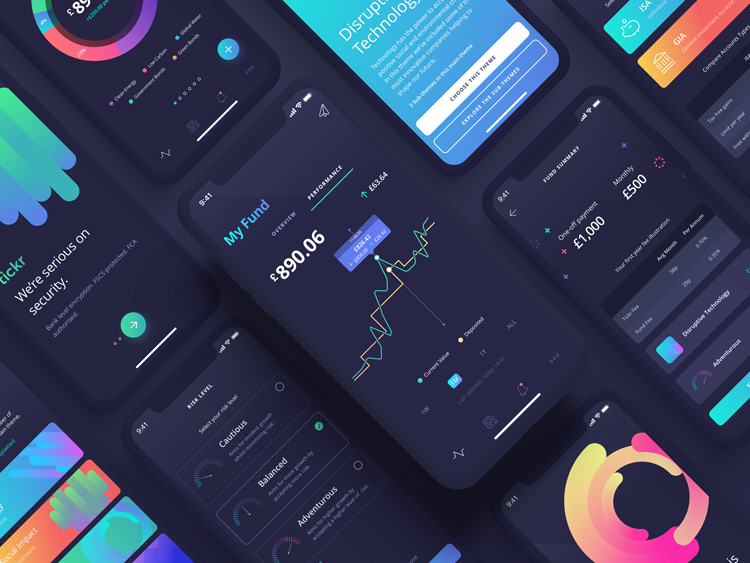 Humphreys says that platforms like Tickr have to take into account a British aversion to discussing money. “We don’t like to talk about money,” he says, though he believes it’s an area that becoming less taboo thanks to the likes of high-profile financial experts such as Martin Lewis.

Moreover, people want to understand where their money is going, according to Humphreys, such as details about what an individual savings account actually is.

It is important to be as clear as possible with the user experience of investment apps – “You have to make it explicit,” Humphreys says. The emphasis on clarity and being user-friendly is not a traditional customer relationship in the investment sector. A lot of this process is about what Humphreys calls “micro-copy” – “using the right kind of words, the right sentences to help build trust.”

Throughout the sign-up process on Tickr there are prompts asking users if they’re sure about key details. Meanwhile, when it comes to requests for additional information it explains the reasoning behind security protocol, like why the app needs a photo ID, for example. 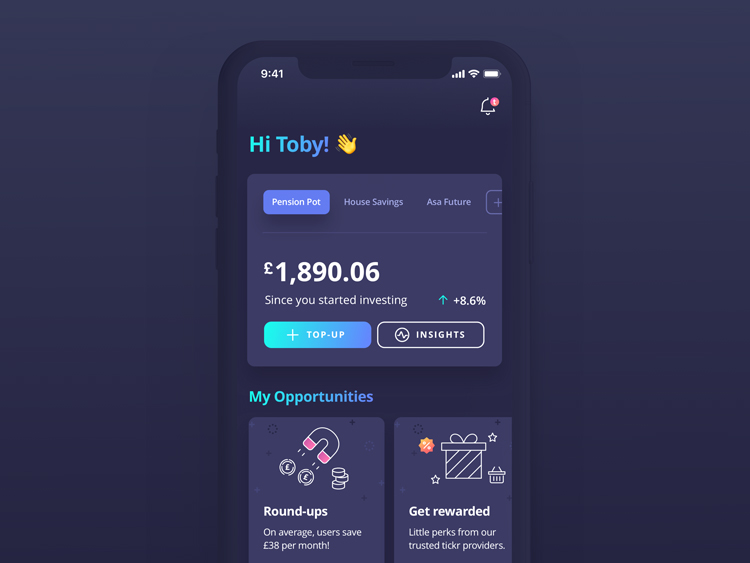 Once people are on board, the UX works towards creating a “stickiness”. “Human beings forget,” Humphreys says, and the design needed to remind them to return. One way Tickr does this is through its “round-up” features, in a similar way to popular money management app Plum.

The app can look at data from your bank account and work out where small amounts of money could be invested. If you spend £1.98 on a cup of coffee, Tickr could take the 2p and invest it, for example. “That’s sticky and effortless,” the designer says. “As long as you’re informed about it, you start to build a pot.”

According to Humphreys, at one point the team was considering adding a world leader board – which would rank users by how many trees they’ve planted through the platform or how much money they had made – but that it decided against adding this “strong sense of competition”.

Tickr has a sense of progression built-in. There’s a measurement which shows how many kilograms of carbon dioxide that you’ve offset. The “micro-copy” here reads: “Your impact so far”. “A sense of progression is a great way of giving users a daily push,” Humphreys says.

Humphreys cites Monzo – the online bank start-up established in 2015 – as a personal source of inspiration when designing some of Tickr’s features, though he says he’s constantly downloading apps to see what works. ‘Gamification’ is often used to label similar apps but Humphreys says there’s a balance to strike between playful elements. It needs to be simple, but people want to be clued in as well. Often, he says that’s it about iterating and seeing what works.

“Illustration is the perfect tool to imagine brighter future”

One difficulty in the sector is visualisation. Many of the concepts are difficult to understand, especially in fields such as cryptocurrency which is seeing a surge thanks to sector-specific apps like Binance and Coinbase, which has over 35 million users. Many of these apps rely on graphs and charts for their visuals, though Tickr also has imagery related to its portfolio, such as wind turbines for sustainable energy.

For Robinhood, this is where illustration becomes a “powerful tool”, Ben Crick says. He expands on the challanges: “For example, what is a stock? What is market capitalisation? How do you explain something like that quickly and keep people engaged? There’s nothing to take photos of, and while a description can be accurate, it can be a little dry.” 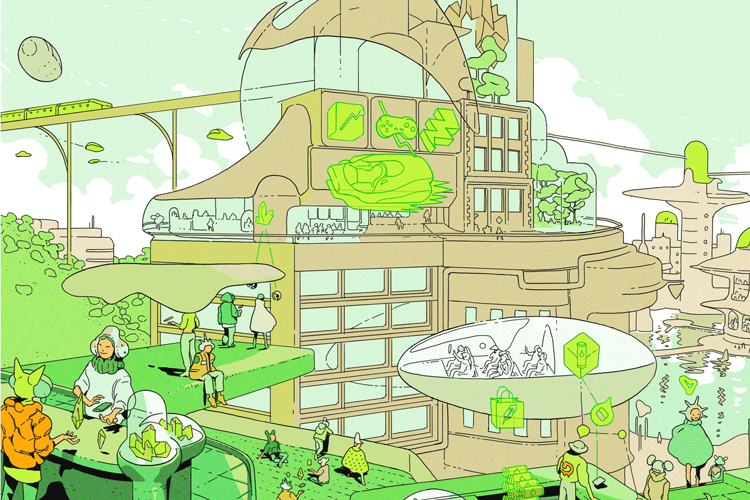 The highly-graphic approach was a way to draw on “metaphors, analogies, idioms, cultural references – all with a dash of charm, wit and visual differentiation,” he says. It also allows Robinhood to become a world that a user can explore, according to Crick.

One of the platform’s features – a teaching page – shows how illustration hopes to “tackle the knowledge gap”, Crick adds. There are also “easter eggs” in the experience, for example (also seen in Uncommon’s recent update for mortgage start-up Habito), which echo Tickr’s “stickiness” elements. 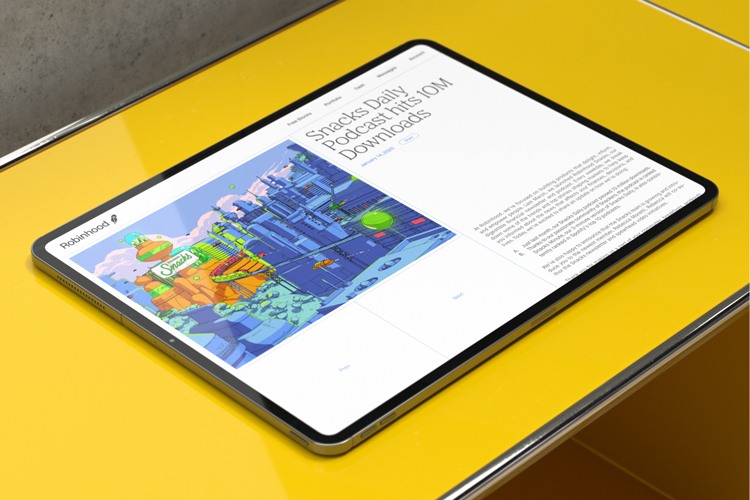 “There’s a rich history of concept art and world building in cinema,” Crick says, citing video games and animation studios such as Pixar as influences for the platform’s look. “Illustration is the perfect tool to imagine brighter future,” he adds.

That was reinforced by the tone, one of the most important features given the turbulent world events of recent years. It needed to be “bright and optimistic”, Crick says. “While we’re all sort of morbidly intrigued by dystopian visions of the future, there’s already far too much of that in the culture right now,” he adds. “And honestly, who’s going to want to build a future that’s worse off?”