PriestmanGoode has revealed its New Car concept, an autonomous vehicle that hopes to fit alongside London’s transport system and meet the changing demands of passengers.

The concept vehicle is 3.6 meters in length and can take four passengers at a time, with two pairs of seats. Included in the project is an app which would allow people to book and customise the vehicle in advance. 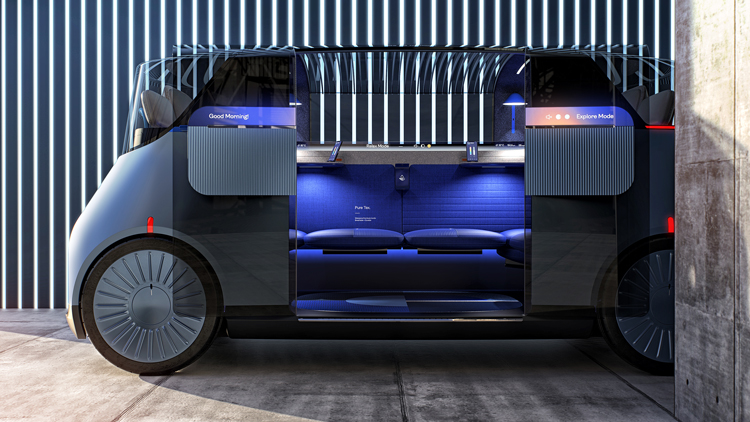 The “pared-back and pure” design of the vehicle is an attempt to fit in with the surrounding London landscape, PriestmanGoode creative director Dan Window tells Design Week.

The geometric forms and angular details are inspired by city’s Brutalist architecture according to Window. In particular the New Car draws on architecture around the South Bank, such as the National Theatre’s curved staircase and front-facing bowed arc.

This was also an attempt to differentiate the vehicle from the Toyota Prius, one of the most commonly used models by Uber drivers.

“The idea is for the New Car for London is to live alongside the city’s existing transport icons like the tube, the double decker bus or the black cab,” Window adds.

The seats are opposite the doors, with the hope of providing easier access for large items like wheelchairs, luggage, prams and bicycles. Leg rests can be pulled out to create sofa-style seating.

The interior features include a rotating table, motion-controlled lamp and an umbrella stand with integrated dryer. There are also devices to hold cups and wirelessly charge phones.

A display strip on the car’s side gives people key information and lets passengers know that they’re getting into the correct vehicle. 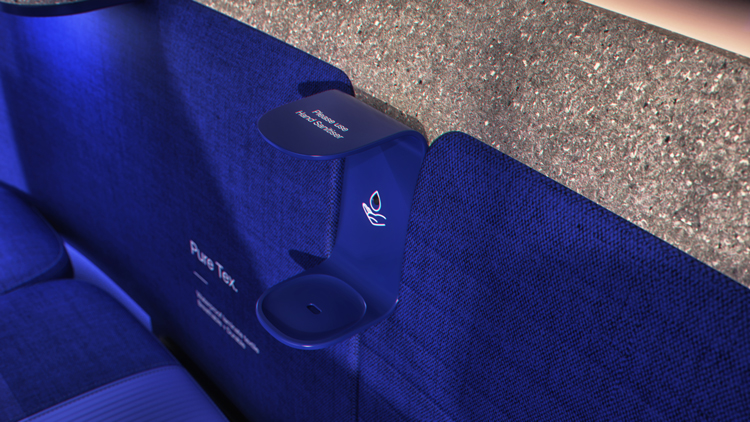 Many of interior details have also been inspired by London. For example, there’s a central rug with a geometric pattern inspired by Transport for London’s moquette patterns – usually seen on tube and bus seats – which provides a “domestic” feeling, the studio says.

Many of these features are customisable, Window explains, allowing people to tailor the vehicle for the trip – whether it is a social journey or one where passengers need to work. 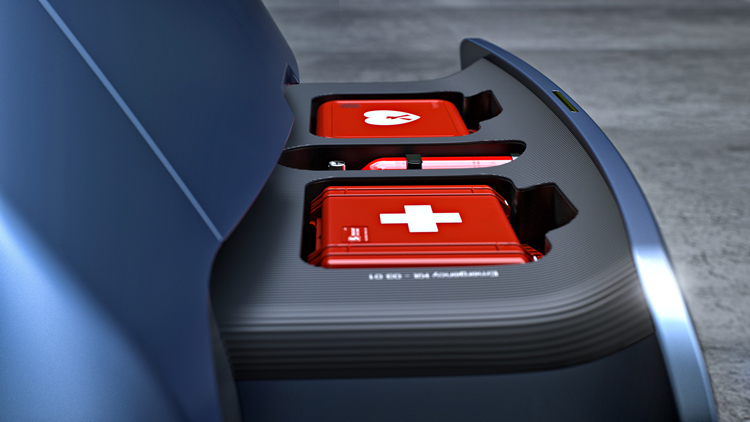 Post-Covid expectations have impacted the design, according to studio chairman Paul Priestman. Interior touches include easily-maintained and washable materials akin to a waterproof jacket, leather and recycled plastic.

There is also an integrated UV cleaning system to sanitise the vehicle regularly, though it would need to be out of service during this process.

Visual cues let passengers know the vehicle had been cleaned between use, in a similar way to how hotels let guests know the room has been cleaned, according to Priestman. “That reassurance is more and more part of the brief,” the designer adds. 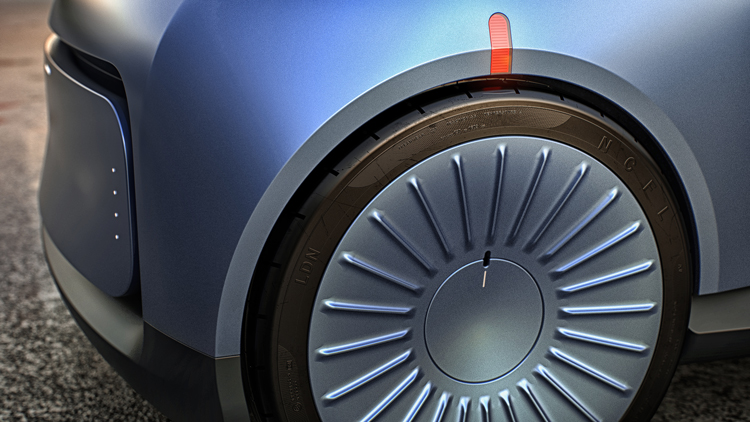 An integrated first aid kit meets the demands of a more community-based user. “The last few months have really highlighted the importance of supporting one another,” Dan Window says.

“As we develop future vehicle concepts, we wanted to explore how they might benefit communities more widely.” The first aid kit could help first responders in emergency situations, according to Window.

Covid considerations also extended to the app and the need for “touch-free technology”, Window says. This starts with the app’s pre-booking system, where you can customise features (about how many seats are needed, for example) or if it’s a work-related or social ride.

“Touch-free is absolutely critical,” he adds. “You don’t have to touch the door handle or the table inside to control them.” When people are in the vehicle, they can control features like whether they want the windows frosted or not. 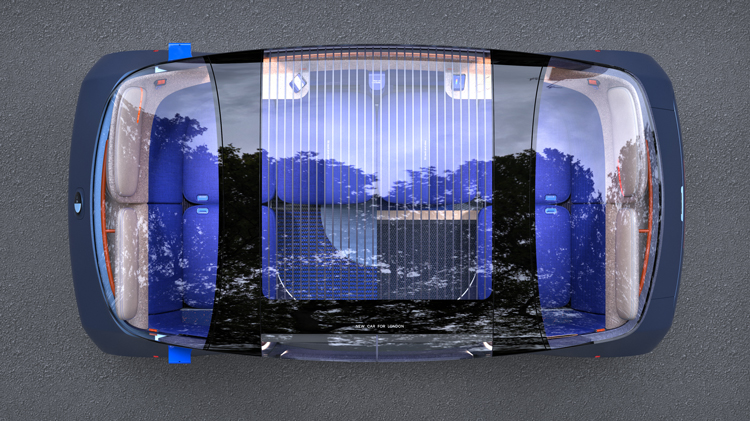 The pandemic influenced the design more widely. If more flexible working patterns continue, Priestman says that the rush hour might not be a part of daily life in the city.

There’s a chance that people might want to “take the slow route rather than the fast route,” he says. “It’s about enjoying the moment.”

To complement these shifts, the New Car has a transparent roof and significant amount of glazing which would give passengers a better view of the surrounding city. “I always love looking up in London,” Priestman says. “You tend to look as far as the shop windows, but you never look above the hoarding.”

This design feature is another attempt to separate from its popular competitors such as Uber, Priestman says. He asks of this new concept: “How do you make the experience appealing? Is there an opportunity to enjoy the city?” 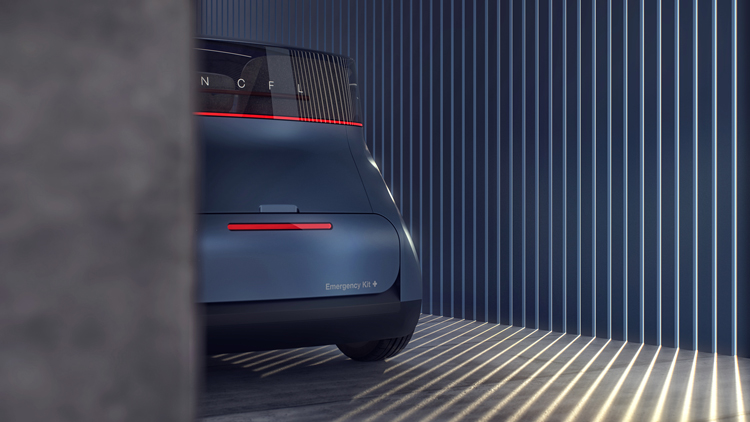 The New Car is more compatible with London streets and not having a driver maximises internal space according to Priestman. When it comes to taxi services like Uber, he says: “We’re using vehicles that weren’t designed for taxis but personal ownership”.

Priestman also hopes that the New Car could position itself somewhere between private and public transport. “There’s been talk about people wanting to buy cars and not use public transport which would be a detrimental backstep, so a vehicle like this is a perfect alternative,” he says. “You are in your own bubble rather crowding onto public transport.”

When could it become a reality? 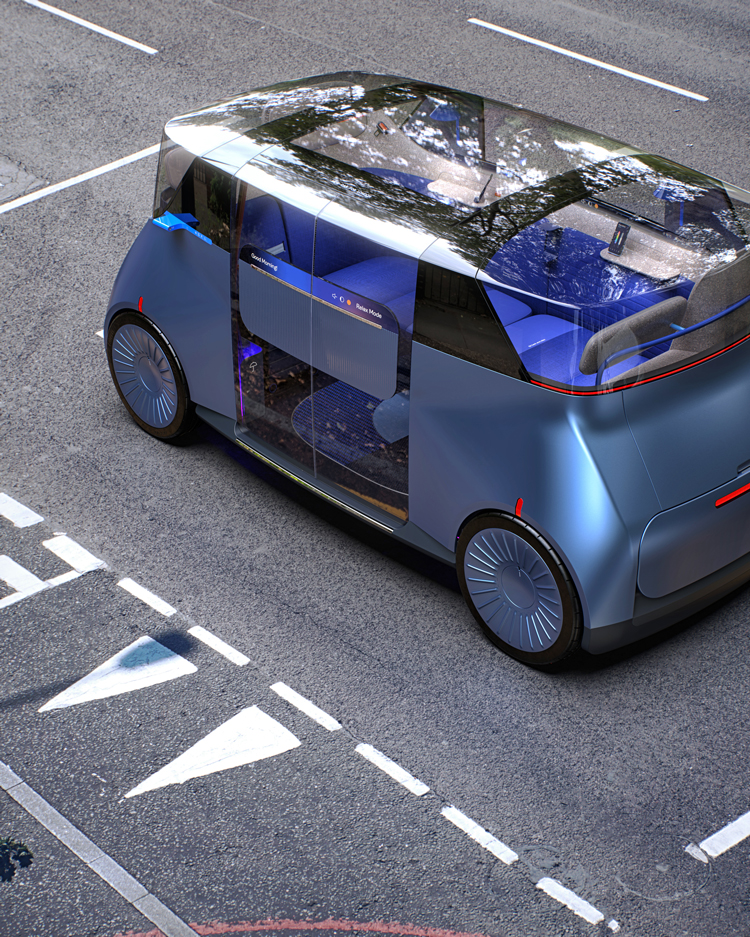 While concepts for autonomous and ridesharing vehicles are plentiful, the reality of such designs is more complicated.

Last year, PriestmanGoode revealed its partnership with German engineering company Dromos Technologies on an autonomous mass transit vehicle which is in development.

Priestman says that a vehicle like the New Car will be in use “in a couple of years”. “We’re talking to a number of car companies about this,” he adds. “Our viewpoint is that this will happen at some point, so we want what does come around to be right for the city of London.”

“The tech exists, it’s about the legislation now,” Window adds.

City-specific transport can be a big draw for tourists, Priestman says, pointing to Hong Kong’s Star Ferry and Venice’s vaporetto buses. Because the basic shape of ride-sharing vehicles can similar, there’s opportunities to make the designs bespoke to individual places, he adds.

“You can add a different look and feel for the right culture. Wouldn’t it be fantastic if each city had different vehicles?”