Penguin Random House UK has announced the winners of its Student Design Award 2018, which asks students to redesign the covers of seminal fiction and non-fiction books.

Entries fall under the three categories of adult fiction, adult non-fiction and children’s cover, with this year’s books being George Orwell’s Animal Farm, Stephen Hawking’s A Brief History of Time and Noughts & Crosses by Malorie Blackman.

Raemarie Lee, a graphic design master’s student at Kingston University, won the adult fiction category for her stark, monochrome cover for Animal Farm, featuring a gradient of black to white, an all-caps, sans-serif typeface for the title and a minimal symbol of a pig’s snout, referencing the main character in the book.

Harry Woodgate, an illustration student at the University of Hertfordshire, won the adult non-fiction category for his colourful interpretation of A Brief History of Time, featuring a spectrum of colours and computer code-like typography with odd spacing. This design looks to reference scientific theories such as “colour shift, multiple dimensions and the expanding universe”, he says.

It features Sephy, one of two main protagonists in the novel, all in black, set against a white background, with red used to highlight the title, and text formed out of the shape of the character’s dress. 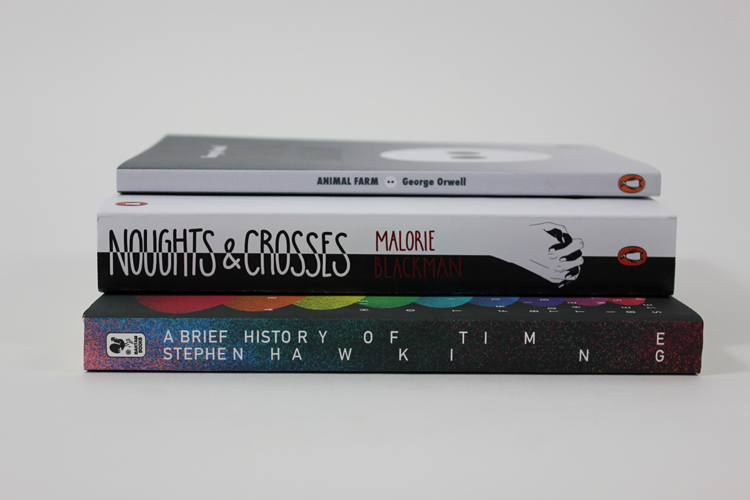 The three winners each receive a work placement at the Penguin Random House UK’s design studio, and a £1,000 cash prize.

The judges say the winners were chosen due to their “original interpretation of the brief, a good understanding of the marketplace and their appeal to a contemporary readership”, alongside their “imaginative approaches”.

Runners-up include Louis Hartley at Northumbria University in second place and Alva Skog at Central Saint Martins in third place for adult fiction; Cameron Edwardson at Coventry University and Stephen Young at the University of Hertfordshire for adult’s non-fiction; and Lucy Scholes at Falmouth University and Heléna Doré at Plymouth College of Art for children’s cover.

The winners were chosen from 30 shortlisted designs with 10 in each category, which were picked out of 2,100 submissions in total.

They were whittled down by three judging panels made up of art directors at Penguin Random House UK and guest judges from design and publishing.

Anna Billson, art director at Penguin Random House Children’s, says: “Design is all about creating an instant connection with a reader.

“The combination of illustration, typography and use of colour on a cover all need to come together seamlessly to make a reader feel instantly compelled to pick it up. All three winning designs were exceptional in capturing these elements and creating that vital connection.”

The winners were named at the 2018 Student Design Award prize-giving ceremony on 20 June at the Penguin Random House UK office in Strand, London.