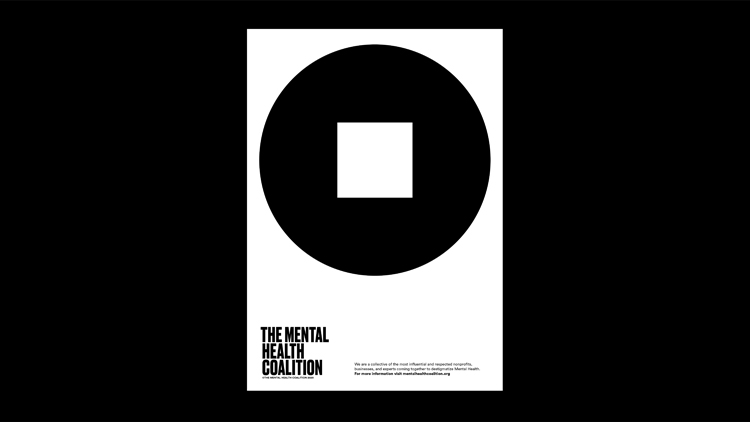 Pentagram New York designer Paula Scher has created the identity for Mental Health Coalition, a collaboration with fashion designer Kenneth Cole. It is a “collective effort that unites the leading mental health organisations, creative and media platforms, advocates and celebrities in a campaign to destigmatize mental health conditions and address the pervasive public health emergency around mental health”, according to the design studio. The identity centres around a black and white symbol – a square peg in a round hole – to show that “there is no ‘normal’ when it comes to mental health and everyone fits”. This symbol also appears in the logomark Pentagram created for the online platform, How Are You, Really? The symbol is presented in a range of colours for the online identity. As Cole notes, it’s “interwoven with pops of colour and fun to lighten the mood and increase engagement”. The identity rollout will be accompanied by a social media campaign, with the hashtag: #howareyoureallychallenge. 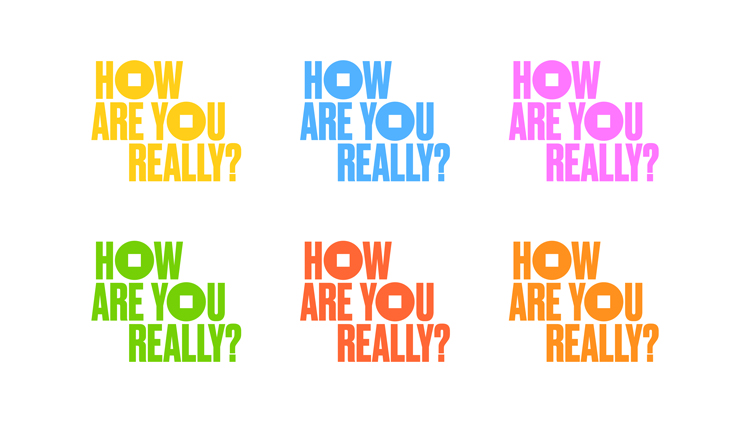 One in Four installation, by Frank Styles 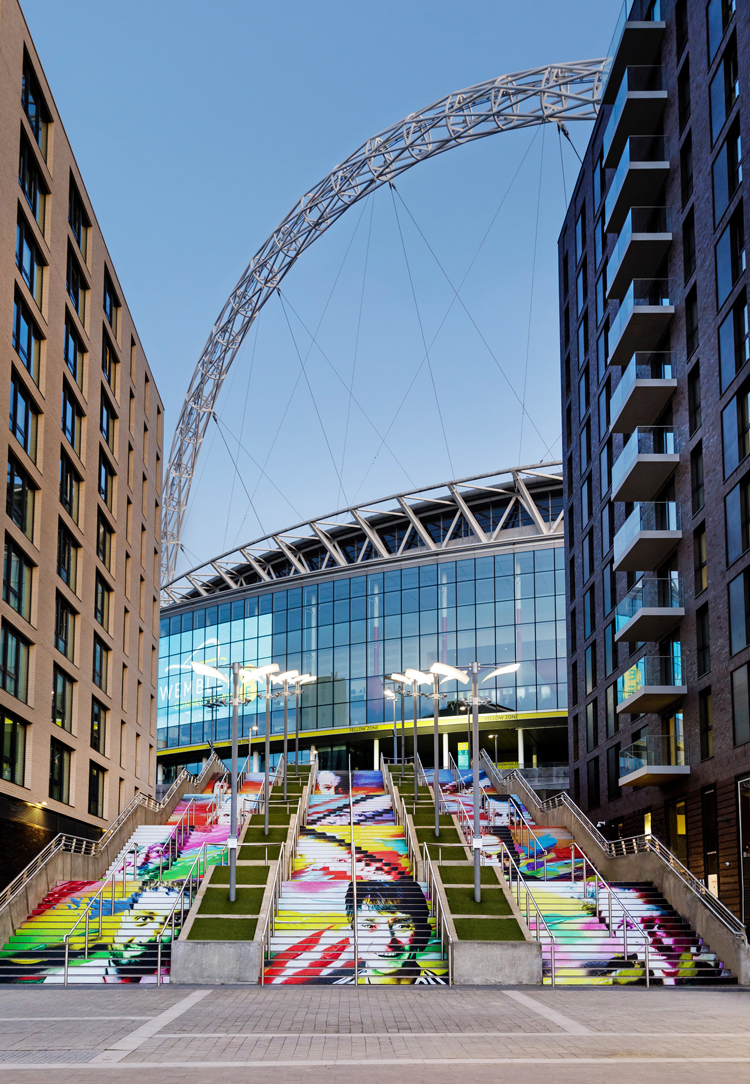 This installation – at Wembley Park’s Spanish Steps (named after Rome’s Spanish Steps) – is a partnership with the mental health charity Mind and the English Football League. There are 12 portraits on the steps; while three portraits on each section are visible, you can only see the fourth if you look over from the next flight of the stairs. It aims to represent how understanding mental health problems “sometimes requires a shift in perspective”.  The title comes from the statistic that one in four people experience mental health problems in a year. Styles says, “As both a football fan and someone who is passionate about mental health advocacy, it was great to work on this commission. Although it may be some time until football fans are able to return to Wembley Stadium, I’m glad my work is still able to send a positive message.” 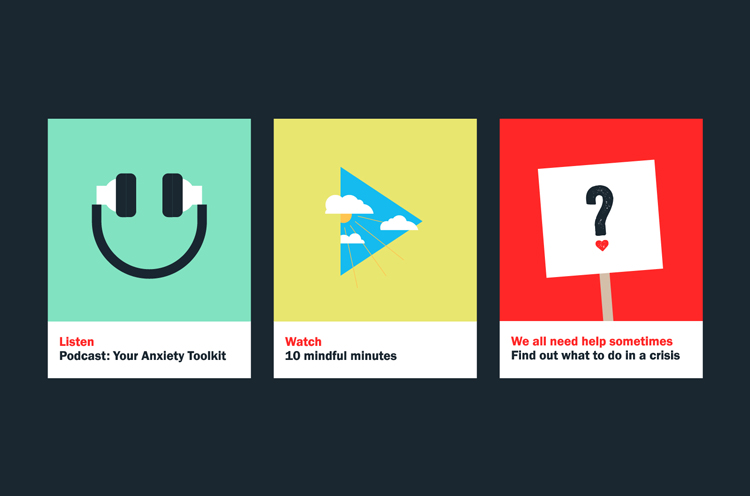 Last year, we featured the branding for Platfform, a mental health and social change charity based in Wales. This month, the charity has launched an online resource that enables young people to “stay connected to vital resources, support as well as each other” during the coronavirus pandemic. It required a new identity, and Cardiff-based Clout worked with young people (virtually) to design and test feedback. Called 4YP, the logomark features a stencil typeface around the main brand’s symbol (an extended version of the word Platfform which aims to create “connections” between people). 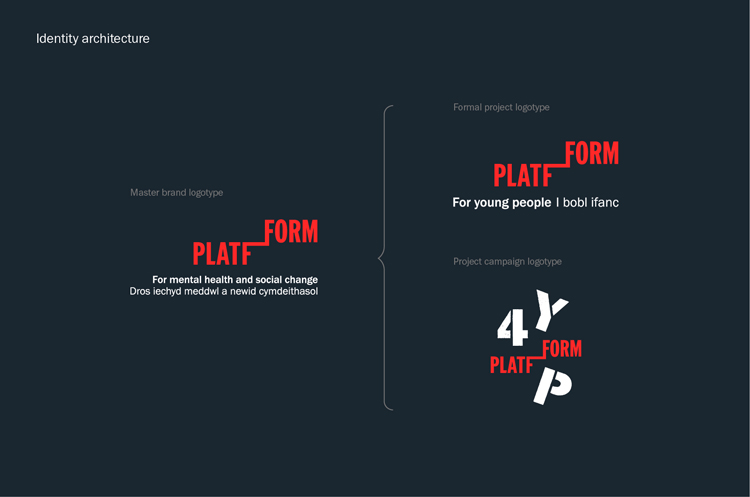 The television channel is showcasing a series of films – “short powerful stores” – to encourage viewers to reach out beyond our immediate circle of close friends and family. One ident shows a text conversation between work colleagues reaching out to one another, while another shows parents-to-be sharing news of a pregnancy to their grandparents. Nils Leonard, co-founder of Uncommon says that the aim was to “create something different, honest and jarring, but still emotional”. He adds: “We used the way we actually message as our medium. The candid love, the one sided wanging-on and the tortuous hesitation we have all felt brought to bear how hard it can be to do the simplest thing: reach out to the ones you normally don’t.” The animated films will roll out across the channel during the week, and will also feature on other touchpoints, such as the channel’s stings and break bumpers.

Postcards from isolation, by sabato.studio 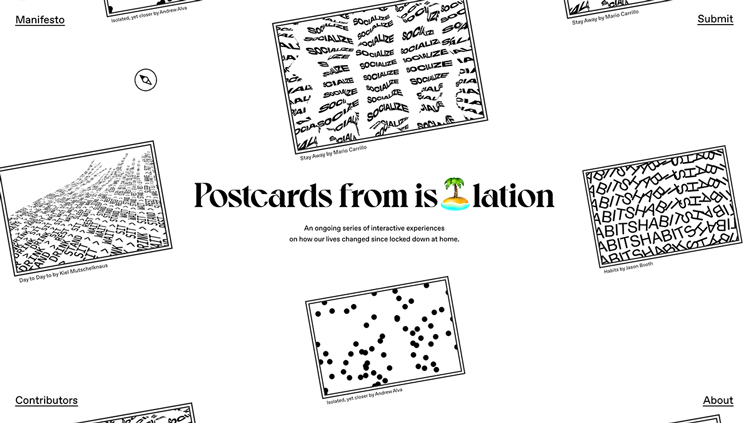 An interactive project launched this month, Postcards from Isolation explores the “cultural shifts caused by the shared lockdown experience”. While it’s not pegged to Mental Health Awareness week, it aims to provide a perspective during a stressful period. You can send the postcards (virtually) to one another, but it also hopes to “crystallise” the shift that’s going on everyday. “The months we’ll live in isolation may be quickly washed away from our memories, because of the dumb repetitiveness of our daily routine,” the studio says. “How will we look back to these days?” The postcards – which will be added to as lockdown continues – have an pre and post switch which you slide on and off to see how different concepts have changed before and after lockdown. 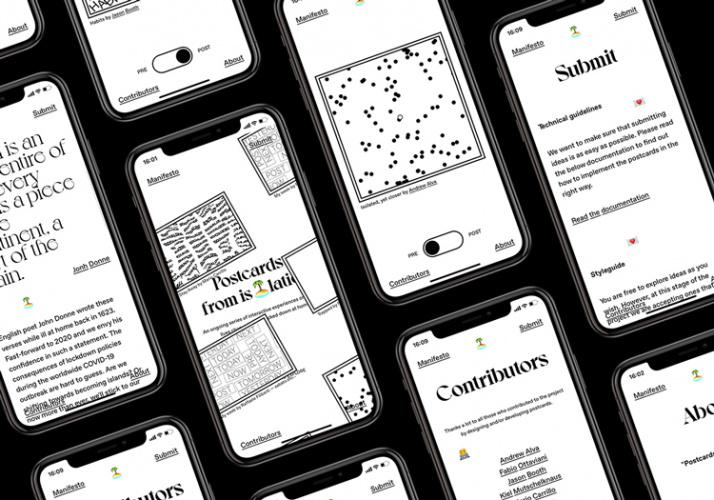