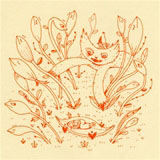 The trend New Weird America coined a whimsical indie music sub-genre that soon infiltrated illustration. Its visual pioneers have created an ethereal, imagined aesthetic, very much based in the real, says Yolanda Zappaterra

For older music fans, the initials NWA most likely conjure up 1980s gangsta rap pioneers Niggaz With Attitude. Hip younger ones might also recognise them as the initials of a much more whimsical musical movement, a loose indie ‘freak-folk’ genre dubbed by Wire magazine in 2004 as ‘New Weird America’, which has grown to encompass a wide range of sub-genres of music and, more unusually, a style of illustration. The two outwardly have nothing in common, but what unites NWA music and NWA illustration – particularly that produced by Aya Kakeda, Tara McPherson and Souther Salazar – is a state of mind, a homespun, garageland aesthetic that is delicate and strange. It’s expressive yet ethereally disconnected – as much Ghost World as Douglas Coupland. Or in visual terms, the psychedelic work of Martin Sharp’s Magic Theatre issue of Oz overlaid with the hippy-trippy line drawings of Betty Boop and Fritz the Cat.

What’s interesting about Kakeda, McPherson and Salazar, who have been the focus of an American Institute of the Graphic Arts panel discussion in New York on the subject of NWA, is how differently they are expressing an aesthetic whose key physical unifying aspects are described by Salazar as ‘the influence of craft and folk traditions on illustration, in terms of materials and narrative’. Kakeda adds, ‘It’s a state of mind – a combination of style and attitude of the artists.’ 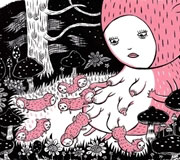 Characterised by its strange, sci-fi, Moomin-like creatures, Kakeda’s visual world is dictated by narrative. This drive also suffuses the work of McPherson, who combines traditional art tools with computer art to create characters that, while sharing no physical characteristics, are as offbeat as Salazar’s and Kakeda’s. She thinks the NWA artists formatively share ‘similar environments, primarily 1970s, 1980s and 1990s popular culture. All of our conscious and subconscious influences are oozing out of our fingertips now, whether we like it or not. Despite the vast differences in style and technique, there is a similarity, a feeling, that unifies it. We are all products of our culture, and that is manifesting itself in this new genre of art.’

But is it a genre of illustration that will prove widely appealing to clients? The NWA trio seems to have tapped into the zeitgeist, perhaps because of what McPherson describes as ‘its dualistic nature/ sweet and creepy, idealised and raw, pretty and ugly. It’s taking two opposing forces and placing them together to create a dynamic tension, enticing the viewer with the seductive qualities of form and paint, then throwing an element into the mix that makes them want to turn away, but are made incapable of doing so.’

But as in all visual culture, trends come and go, and Lindgren & Smith illustration agency head Pat Lindgren sounds a warning note. ‘Last week at a Society of Illustrators opening I saw lots of beautiful art – pen and ink, watercolour, pastel, digital… lots of mediums, but underneath it all the feeling that these artists all had skills plus clever minds,’ she says. 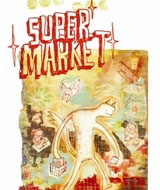 Unfazed, Salazar, Kakeda and McPherson remain sure of themselves and their ‘weird’ aesthetic. ‘I think illustration follows trends, just like anything in the world, but good ideas and unique approaches will always outlast those trends,’ says Salazar. Kakeda agrees, adding, ‘When I was starting out I was pressured and keen to follow new trends, but I learned that the most important thing is your own voice. And clients appreciate that too.’

McPherson is positively pugnacious. ‘There will always be trends, but I think by being true to yourself and your art, you will set the trend. I don’t tailor my art to anyone. I create what my mind needs to create. I get hired to do what I do because of what I do and how I do it. Nine times out of ten I get 100 per cent creative freedom to do what I want. And that’s how I work best. It’s essential. I need to feel I have that freedom to create anything and experiment, or else the work becomes un-fun and clichéd. And that’s bad,’ she says. Their work may be full of imagined worlds, but these three illustrators are as grounded as it comes in the real one.