Many designers will associate the word “supergraphics” with exhibitions, building facades and art installations. The term is used to describe large-scale graphics, typography and imagery that adorns walls or other large surfaces – but the variety and application of these mega graphics have increased over recent years.

Now, supergraphics are used to brighten up hospital wards, school halls, community centres and public spaces. Clever, intricate wayfinding and graphics lead visitors through train stations and gallery spaces, or huge, illustrative murals make a political statement when printed on the wall of a dilapidated building in a run-down part of a city.

From Lance Wyman’s Mexico City metro wayfinding and signage through to Morag Myerscough’s graphics for Sheffield Children’s Hospital, the impact of such work should not be underestimated. Not only has such design been used to help navigate, inform and provide clarity, but also make people happier.

A new book called The Field Guide to Supergraphics: Graphics in the Urban Environment explores the many uses these giant designs now have, with 60 case studies taken from across the world. Split into four main chapters or “types” of supergraphics – including Typographic, Colour, Graphic and Vernacular (meaning language, or visual language) – the book delves into projects as diverse as Paula Scher’s wayfinding and graphics for a car park in New York, through to murals reinvigorating housing community spaces in Colombia.

Sean Adams, author of the book and co-founder of former Californian design studio AdamsMorioka, tells us about the importance of bringing large-scale graphics to life. 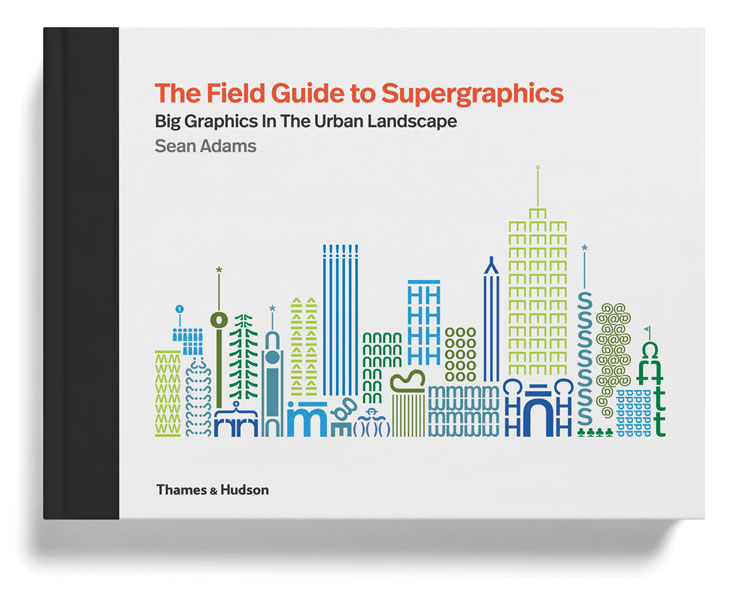 Design Week: Why did you decide to publish this book on supergraphics?

Sean Adams: Last year, I put together a book on designers and colour, looking at how certain colours are used in fields like fine art and architecture. I kept stumbling across amazing supergraphics but they just weren’t right for that book. I decided they needed their own book, and Thames & Hudson loved the idea because there isn’t many books like that out there.

SA: I’m a graphic designer by trade; I ran my design studio, AdamsMorioka, in California for 25 years. Then about five years ago, I realised I wanted to be a little bit more servile by devoting my time to helping young designers and send the elevator back down. So I began writing books, and now I run a graphic design graduate program at ArtCenter College of Design, also in California.

SA: I did work on supergraphics myself – they were one of my favourite things to do, but also one of the hardest. For example, when I created a new visual identity for kids’ TV channel Nickelodeon, I really wanted to put a giant logo on the side of the company’s building in New York. Unfortunately, this was impossible – there were too many code violations.

Honestly, I’ve done some truly awful things. I once designed a restaurant in West Hollywood, which originally wasn’t very visible and wasn’t getting the traffic or footfall it needed. So I had the entire building painted hot pink, with a giant logo on it. People would walk past and say, “Have you seen that hideous building?” But it’s a designer’s dessert to do giant typography and colour like that.

DW: How did you source and choose the 60 case studies for the book?

SA: Fortunately, I knew at least half of them already – there are just some things you know about as a designer! I’d been to see the BMW museum in Munich, Germany, and I’m Paula Scher’s good friend. But my assistant helped me dig around to find younger designers; those who don’t get published all the time. I had to track down some new work by designers who haven’t had recognition yet.

DW: Do you have any favourite supergraphics in the book?

SA: The work that Spanish design group Boa Mistura does with disadvantaged communities is remarkable. It’s not about selling a product, it’s about improving the lives of people in underprivileged countries. For example, they transformed the Plaza de la Hoja in Bogotá, Colombia with a beautiful mural; a complex of 12 buildings built to house families displaced by violence and conflict in Colombia. It was painted with the residents. Another Portuguese group, P-06 Atelier, did a beautiful walkway in Lisbon. The ground is covered with large messages and instructions, activating the public space and turning it into something exciting that people can use. I was thrilled by how typography can completely change the way a space is used and offer access to a community.

DW: Do you think design has the power to transform and change spaces?

SA: If there’s anything I have learnt from working on this book it’s that design has the power to change the existing environment and its message. It’s not about painting something a big, pretty colour; it’s about actually looking at the context of the space, the issues it has and addressing them. Colour and shape can completely modify a structure.

Then there’s just making spaces easier to navigate. There’s an environmental graphics and wayfinding project that Johnson Banks did for the Brighton Dome. It has flawless typography, but it’s the gold leaf messaging around the walls that tells the whole story. Type has been used at huge scale to evoke the Dome’s successes, with facts and information painted on. People can go in, enjoy the space and learn something. That’s a really exciting and successful piece of work.

DW: Do you think design can truly change communities, and make them better places to live and be?

SA: It can be an enormous help. Architecture is clearly the bones of that, but to have a designer come in and overlay that with ideas that support the community really changes everything. We’ve all been to spaces that are grey, dull and miserable. Transforming the space can make the people there feel like they are connected to it. That’s the power of supergraphics, as opposed to just making things look attractive. Most of the examples in the book really had to do that; I wanted to find spaces that made an impact on the viewer and changed the way someone felt emotionally in that space. Transforming spaces can give the occupants a sense of optimism, encourage them to leave their houses, be inspired and make the entire culture better.

DW: Is this book aimed at designers, or non-designers too?

DW: Is there any space across the world you would love to see transformed by supergraphics?

SA: If you’ve ever spent time in East Berlin, you’ll know that it still bears the scars of the previous communist government. It looks dreary and sad, and someone just needs to go in there and do some great work because it’s such a vibrant city in terms of culture. Putting artistic energy into some of those neighbourhoods that still have Eastern Bloc architecture would be fantastic.

The Field Guide to Supergraphics: Graphics in the Urban Environment is published 22 February 2018 by Thames & Hudson. It is available to buy for £16.95 from the Thames & Hudson site.