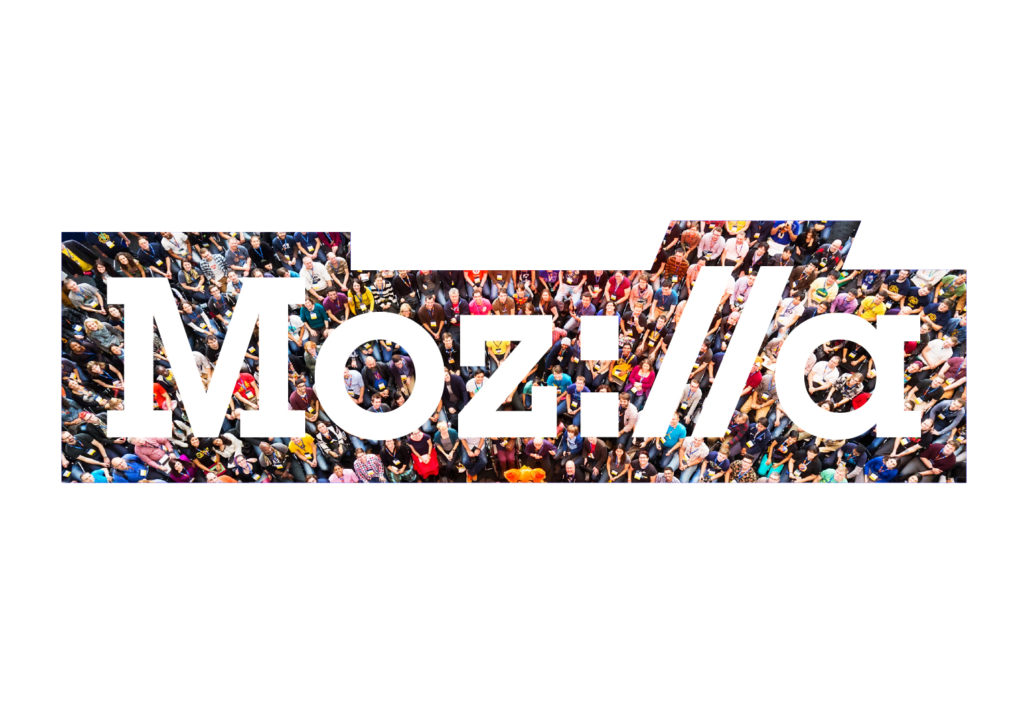 Four designs have been shortlisted in the search to find a new brand identity for software company Mozilla.

Mozilla is best known for its web browser Firefox, though its latest rebrand project is an attempt at dispelling the myth that this is the only thing the company does.

It is working with design consultancy Johnson Banks on its open-source rebrand project, which has seen it seeking feedback from the Mozilla community and general public through the comments section on the Mozilla blog, social media and live events over the last few months.

Involving the community in its rebrand aims to show the company’s “transparent” and “open” philosophy, Mozilla says. However, the company has made it clear that this is not a crowd-sourcing project, which would involve public voting, but instead a way of harbouring thoughts and opinions.

In August, seven designs were revealed, and now these designs have been swapped, amended and whittled down to a final four. Only one idea has been retained from the original seven.

This visual identity has been adapted from the first round of ideas, and includes the internet url signifier – :// – as part of the logotype. Mozilla says incorporating this symbolic lettering of the internet into the logo itself “creates a type-able word mark” and “alludes to Mozilla’s role at the core of the internet”.

The blue has been changed since the original version to a darker navy shade, which aims to reflect the palette of the early internet says Mozilla, and the designers are currently looking at various applications which could mean characters swapped out for emojis or other letters. 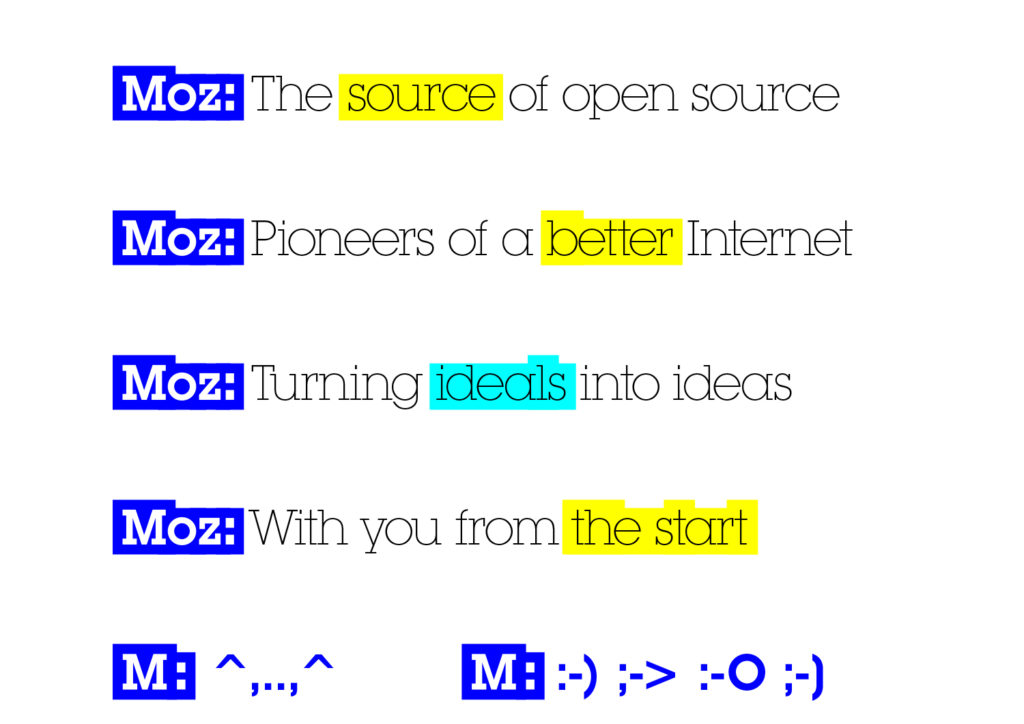 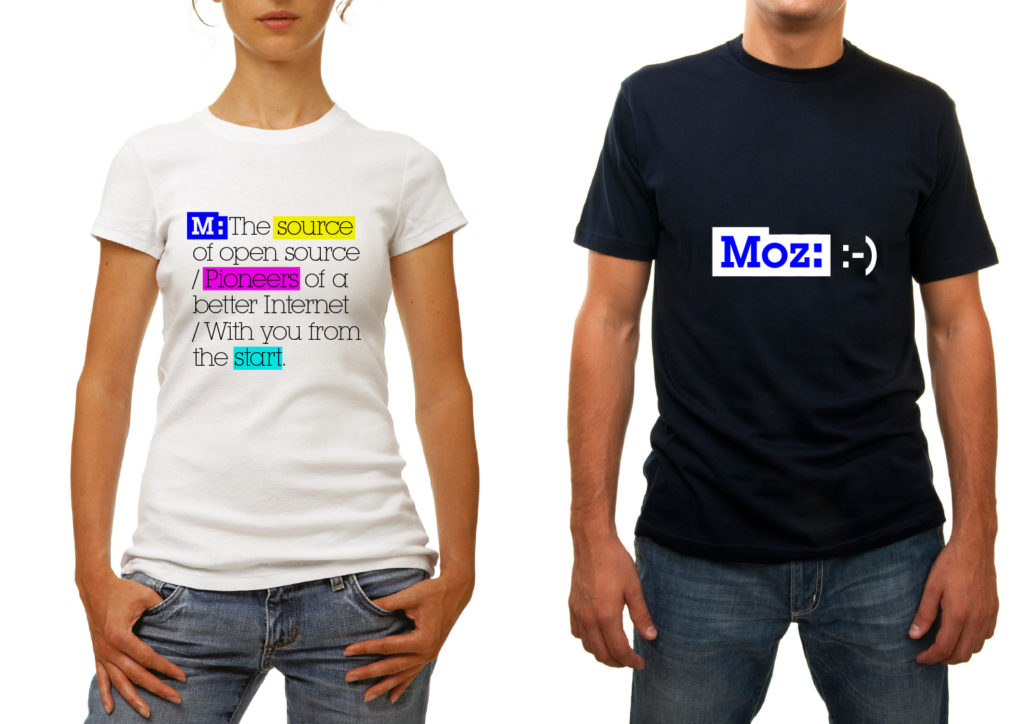 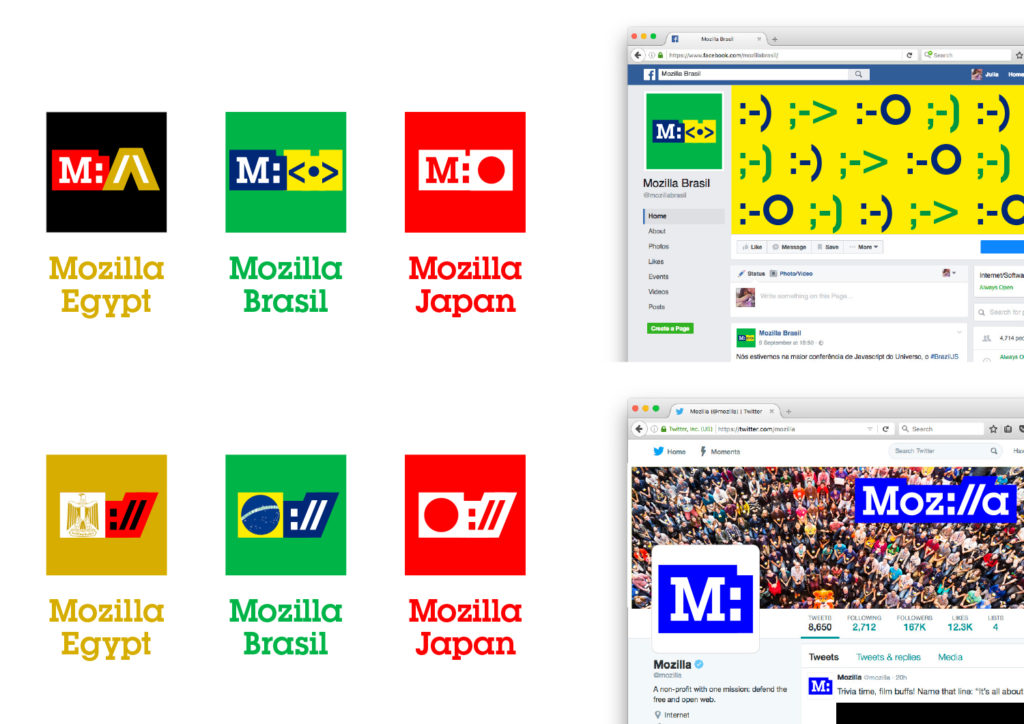 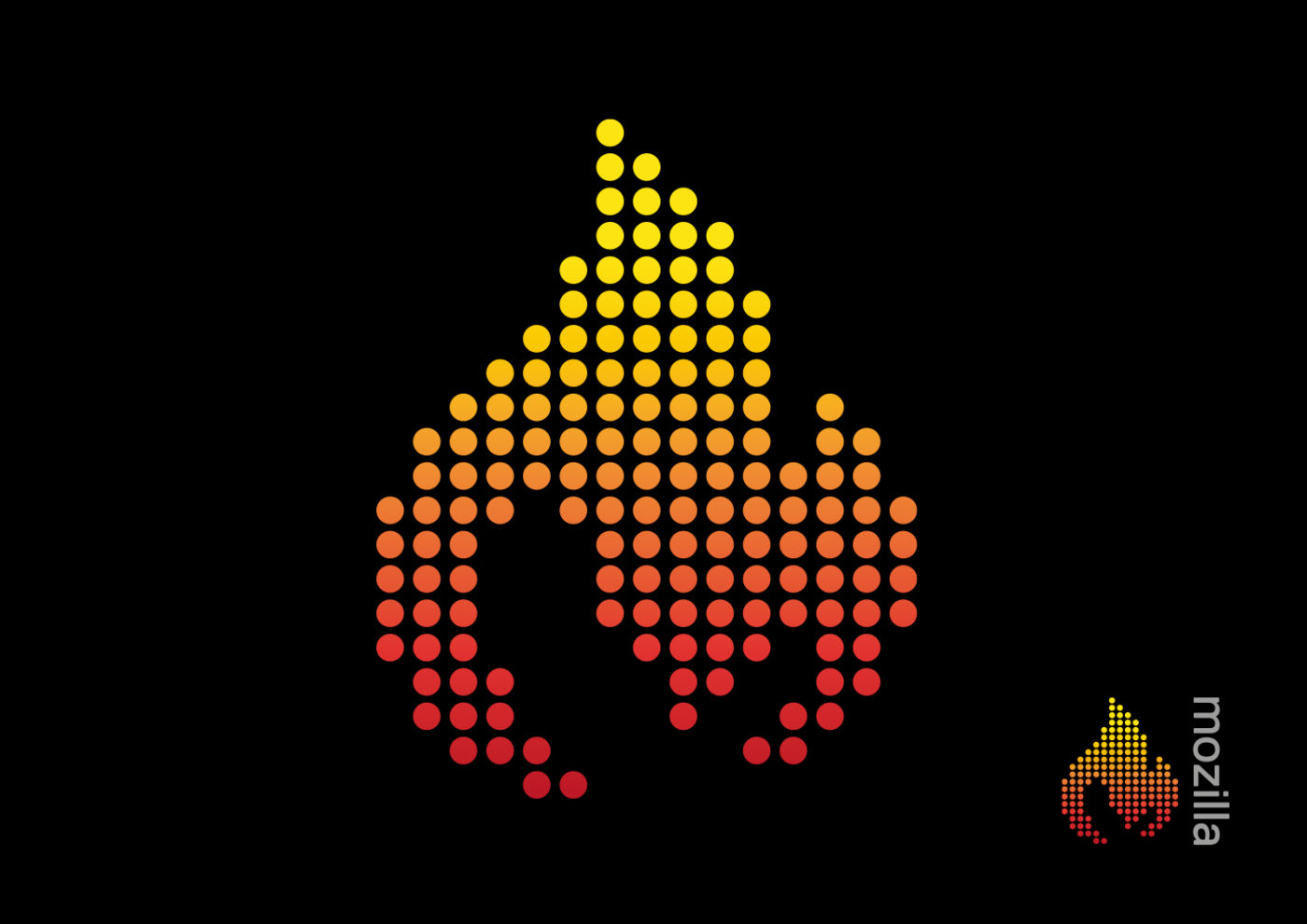 This is an entirely new identity and is a pixelated flame symbol, which creates an “M” shape within it. Mozilla says the flame could be a symbol of Mozilla as “the beacon for an open, accessible and equal internet for all” and “something that a community gathers around for warmth”. Variations have been considered where the pixelated dots could be replaced by code. 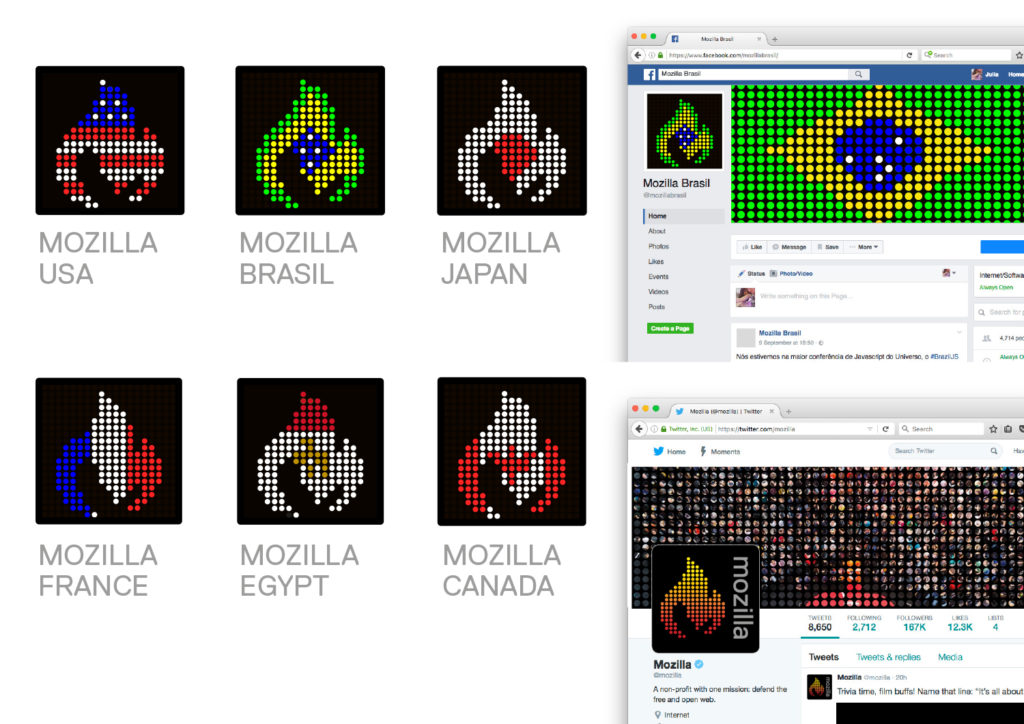 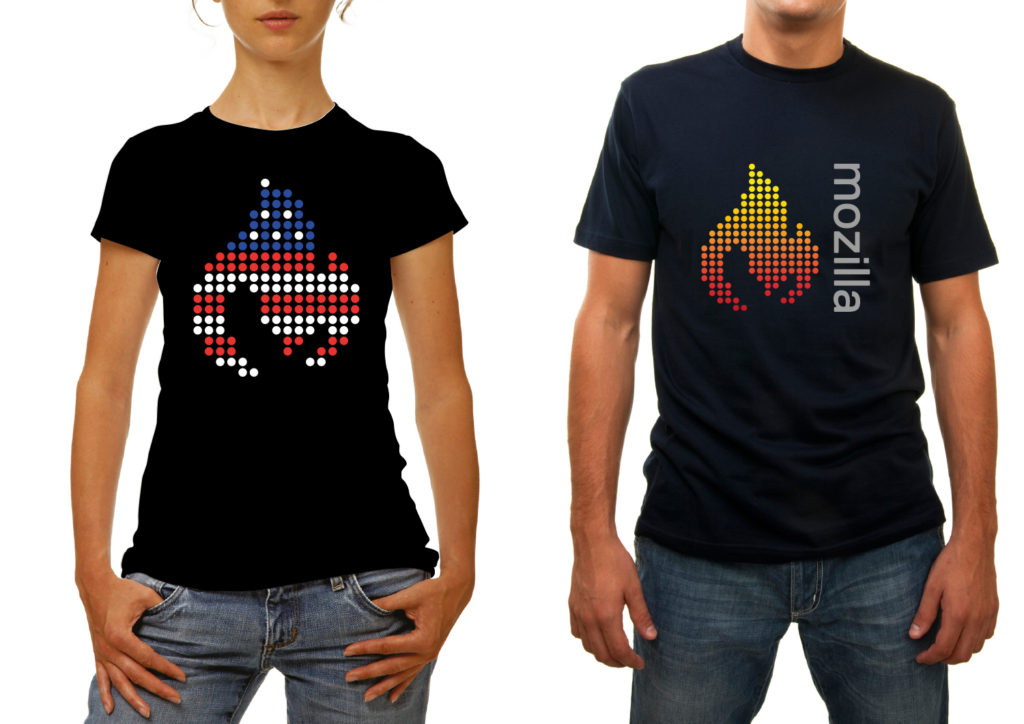 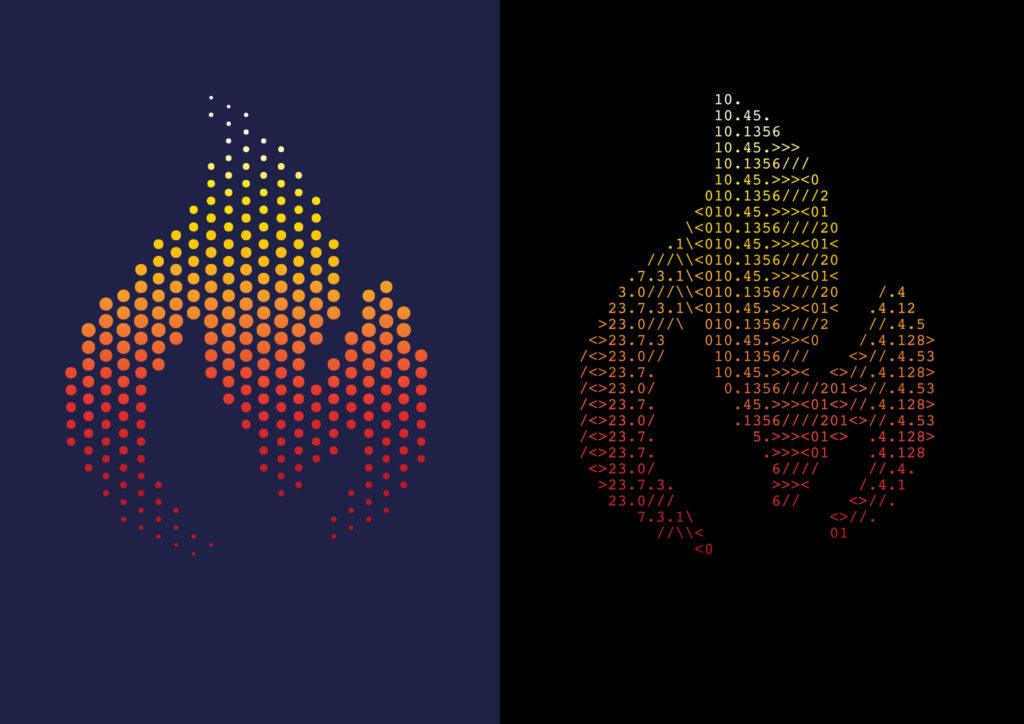 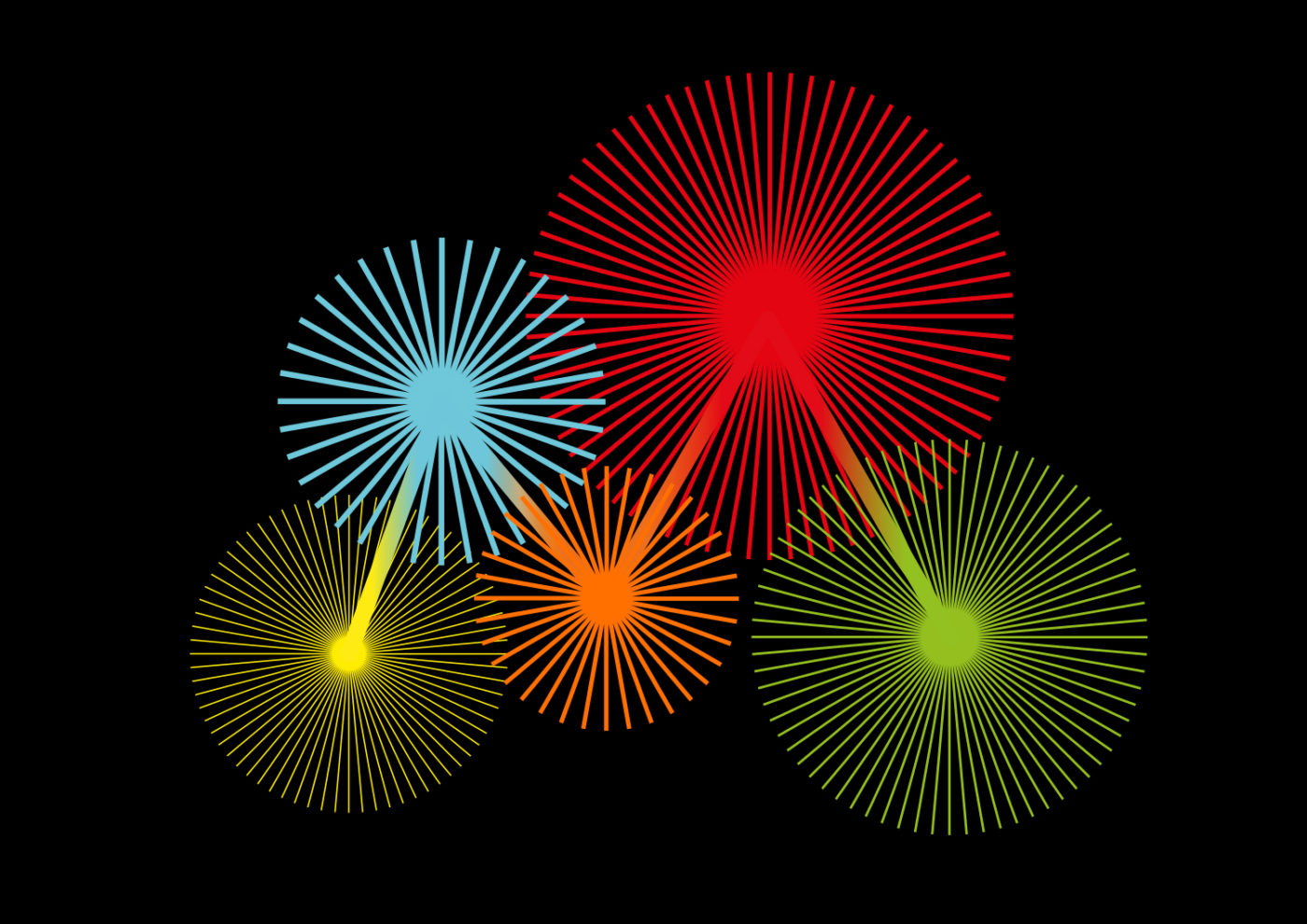 This draws inspiration from a previous identity, which depicted a “wireframe” of the internet.

Burst aims to depict data and use “classic internet imagery”, says Mozilla, and centres around the number five, which has significance for the company. It is currently collecting data around five areas of “internet health”, and there are also five points created within the letter “M”. The final image has five interlocking spherical shapes, which create the letter “M” when joined. 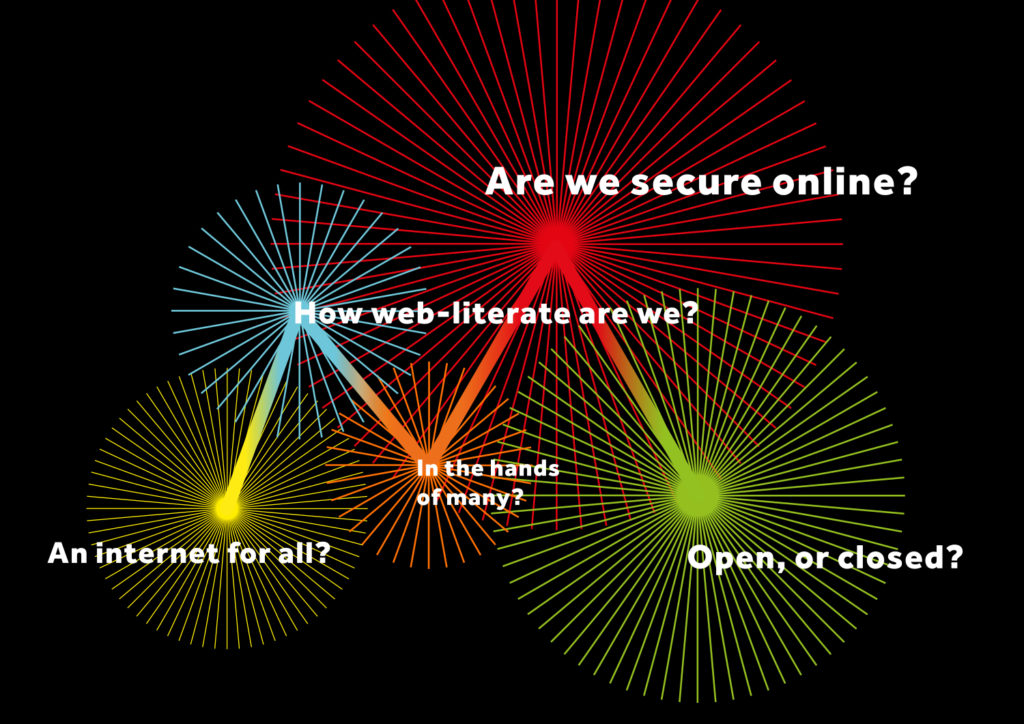 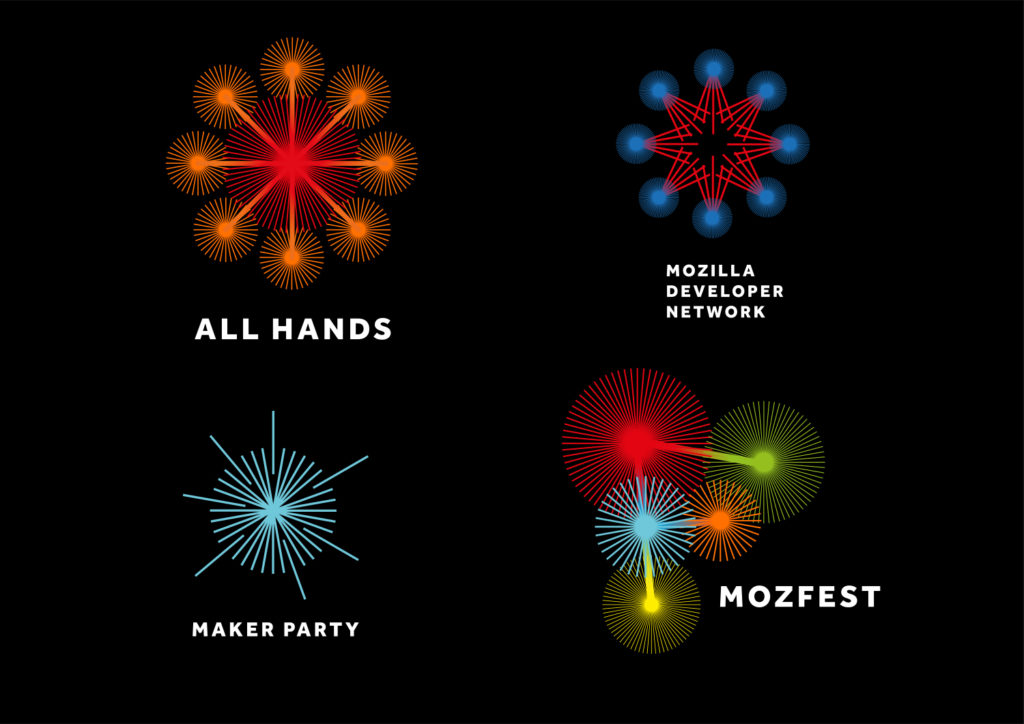 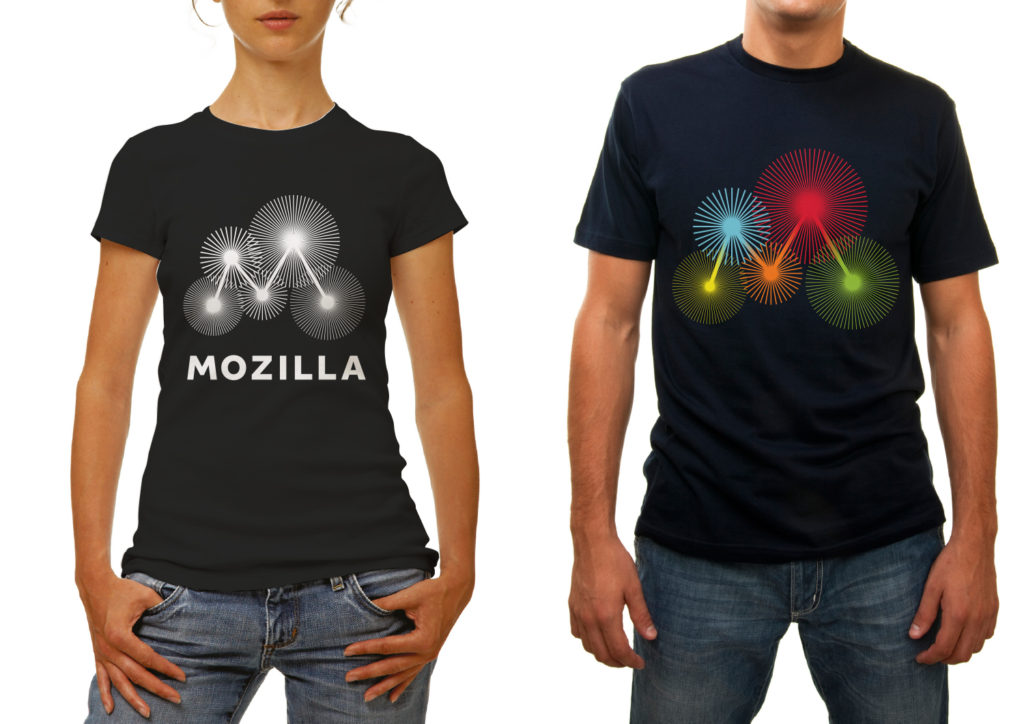 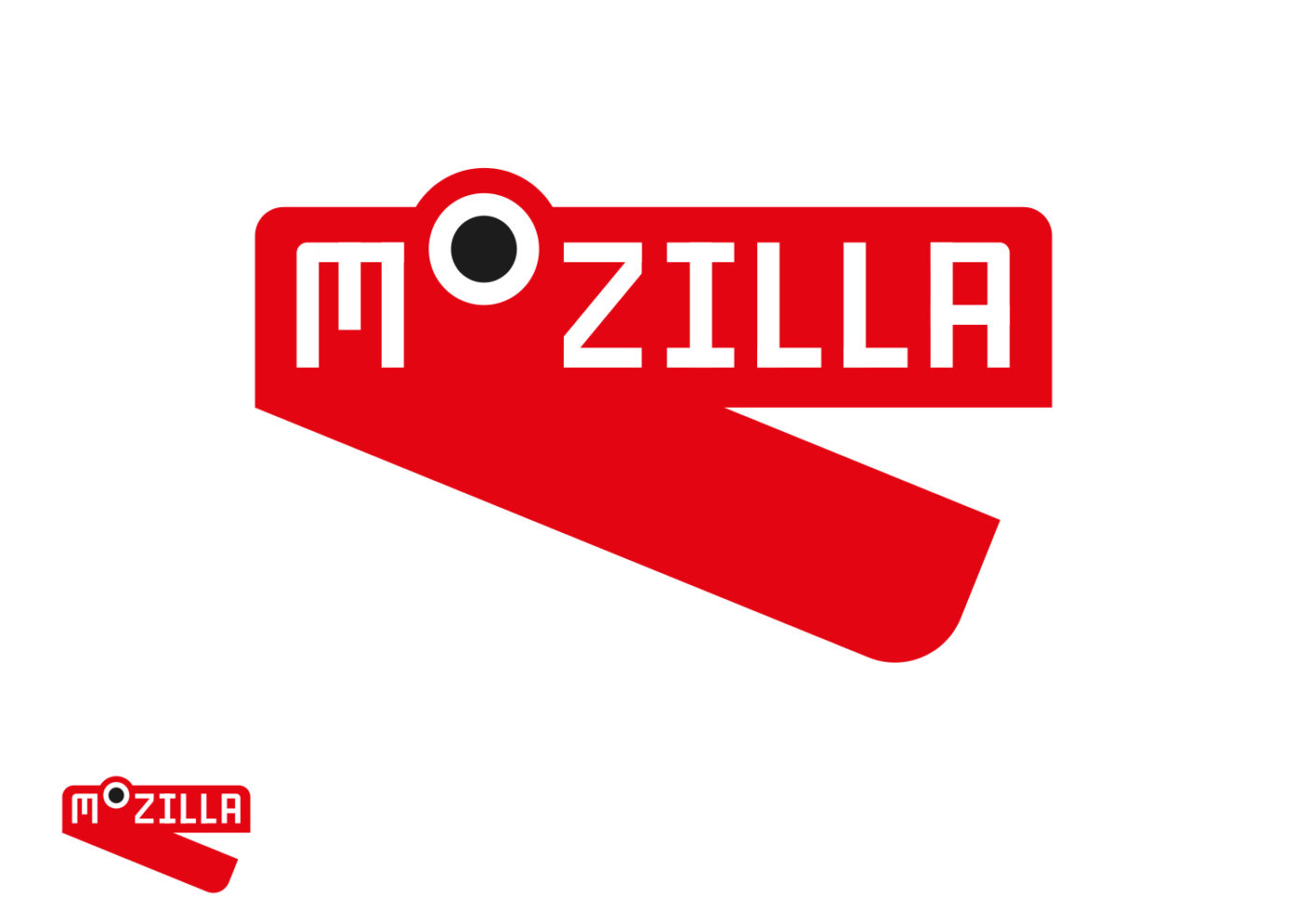 This is an adaptation of a previous identity, The Eye, which saw a reptile eye shape created out of the “O” in Mozilla.

The new version uses a more obvious image of a dinosaur’s head, created out of a red chevron and white type. The “O” of Mozilla is filled in black, creating an “eye” for the dinosaur. Moving gif applications of the logo will see the dinosaur head “chomp”, while different coloured chevrons will be used to indicate that Mozilla is “for everyone”. 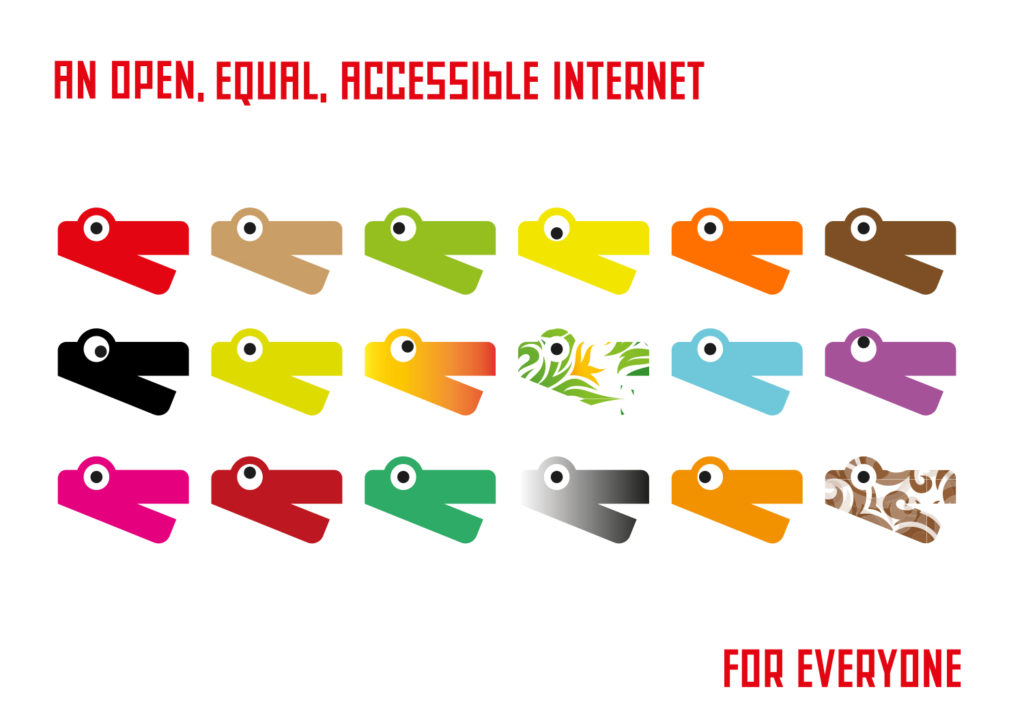 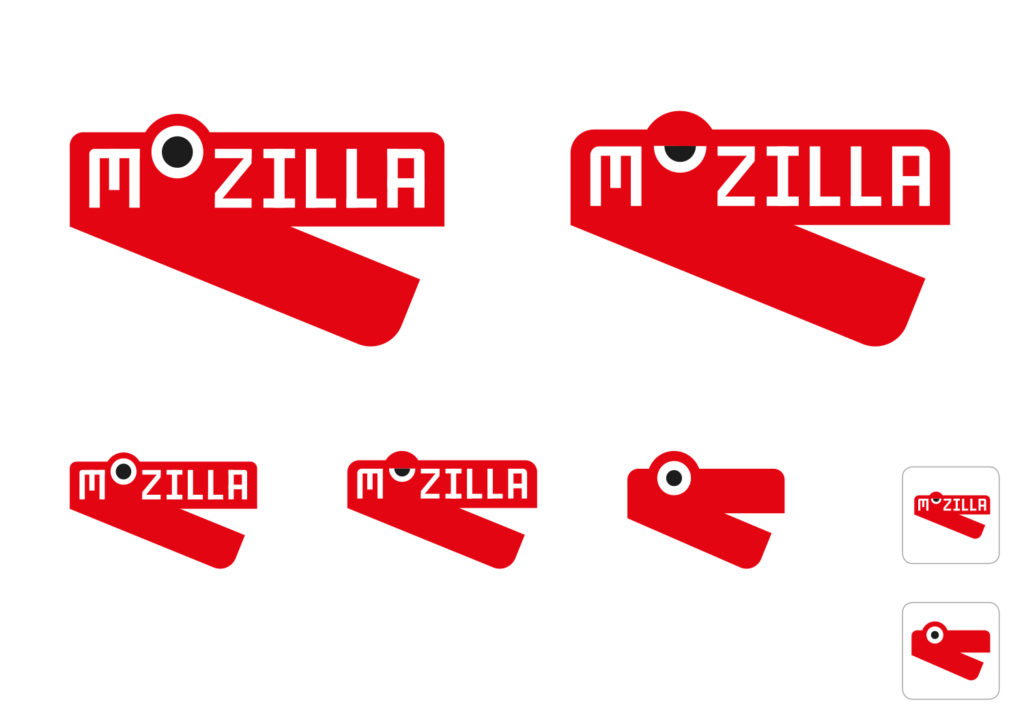 Mozilla invites the public to talk about the designs in the comments section of its blog here.