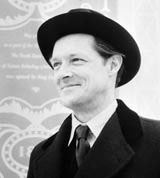 The architect Sir Hugh Casson died at the weekend, aged 89.

Casson had a strong influence on his profession over his 70-year career. He was chosen by the 1951 Festival of Britain director-general to be the festival creative director of architecture. What he achieved was, to this day, a milestone in the development of UK design and architecture.

After the festival Casson established the design department at the Royal College of Art, and later went on to become president of the Royal Academy of Art.

Casson also sat on the Royal Fine Arts Commission and was a trustee of the British Museum and the National Portrait Gallery. He also had the privileged position of being the Queen’s architect.

I first met Casson in 1989 with Neil Southard when we curated an exhibition to celebrate the anniversary of the 1951 Festival.

To this day I remember his kindness, warmth and good humour. We met on many occasions later, and every time was an unforgettable pleasure.

I only wish I could meet him again at the Millennium Dome, the next Festival of Britain. I’m sure he would have been very proud.