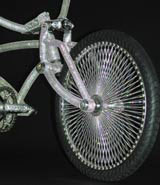 ‘[Figgis] pointed out that miniaturisation is convenient, but makes it difficult to film from an ergonomics point of view and hugely amplifies shake. And, obviously, it’s important to have a steady camera that’s easy to hold,’ he explains.

Out of this brief the Fig Rig was born, which Wilson describes as a ‘one person film crew’. The camera is enclosed and protected by its circular design and the circular frame also works like a scaffold, enabling users to add peripherals such as microphones and lights.

The project is indicative of Wilson’s way of working – he prefers users to be intimately involved. It’s a process Wilson first put to use when he spent a year on a research fellowship at the RCA’s Helen Hamlyn Research Centre. Sponsored by children’s mobility charity Whizz Kids, he developed the Trike, a hand-propelled bicycle for handicapped children that won a number of awards, including the Lord Snowdon Prize and the Helen Hamlyn Design for our Future Selves Competition.

‘I like users to get involved in every project I do. [Figgis] offered so much insight on the Fig Rig, and the Trike would never have come out of me sitting in my bedroom. The children were totally involved from start to finish, it’s all about users and interaction.’

In the Wilson household, design runs in the family. His father Tony and brother Oscar are graphic designers and his mother Faith creates handcrafted knitwear. Wilson has worked with Oscar on several projects – in particular for StÃ¼ssy, where the two brothers designed a limited edition box set containing a T-shirt and sticker set featuring Oscar’s graphics and 7-inch slip mats and record spacers, created by Wilson.

Now he hopes the windows he’s creating for Milliken, which will be on show during London Design Festival in September, will also open the door to interiors and architectural projects.

‘Design is problem solving,’ says Wilson. ‘It’s delivering beautiful solutions that are slightly different. You should have fun with it and design products that people want to keep.’

Value your Work applies to more than product design…