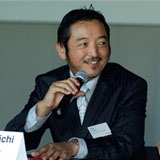 Toyota has confirmed that it is to roll out further designs from its European Design Centre in France, the home of the Toyota Yaris.

Fukuichi would not comment on which specific projects would be rolled out using the car-maker’s J-Factor design philosophy. However, Toyota recently unveiled the ‘urban-friendly’ Endo concept car at the Frankfurt motor show, which was designed by the Nice design team.

While Toyota has committed €2.7bn (£1.8bn) worth of investment in its two UK plants in Burnaston, Derbyshire and Deeside, North Wales, the question remains as to whether or not the decision to put new ED2 projects into production will mean any ramping up of the 36-strong design facility in the South of France. However, the automotive group has pledged to increase its global production rates significantly over the next few years.

Toyota has four main design centres around the world – ED2 in Nice, plus one in California and two in Tokyo, which is also home to the Lexus design team.