When people think of seminal music festivals that took place in 1969, it’s likely Woodstock, with its promise of peace, that first springs to mind. But two months prior, Harlem Cultural Festival – which sought to promote black music following the civil rights movement – presented an equally starry line-up in New York. Only one of these festivals has infiltrated popular culture so far.

A new documentary film, Summer of Soul (…or, When the Revolution Could Not be Televised), hopes to shed light on the less-publicised festival which ran for a total of six weekends. Directed by The Roots frontman Questlove, the film showcases acts like Stevie Wonder, Nina Simone and Sly and the Family Stone through restored footage. It premiered at this year’s Sundance Film Festival. 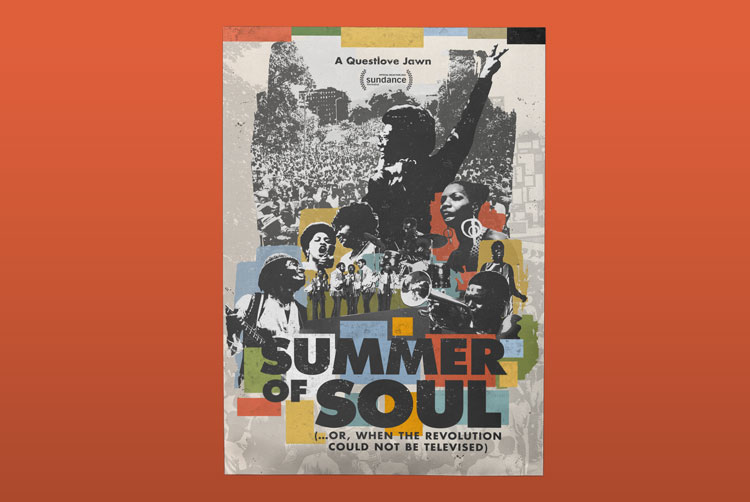 As the film’s consulting art director Frank William Miller Jr. explains, the documentary’s visuals evoke some of the social and cultural issues surrounding the festival. Miller, who is design director at Matter Unlimited, also created the film’s poster for Sundance and the graphics used for opening sequences, transitions and lower thirds. It was the poster that set the tone for these visual references, Miller explains.

The designer’s first concern was quality. “This is footage that’s been in a basement for decades,” Miller says, recalling the question at the front of his mind: “Will I have access to good photos or will I have do something more illustrative?” The research phase involved eclectic references. When the team was considering a hand-drawn approach, it looked to illustrative posters for films such as 1937’s One Mile From Heaven and 1941’s Murder on Lenox Avenue, for example. 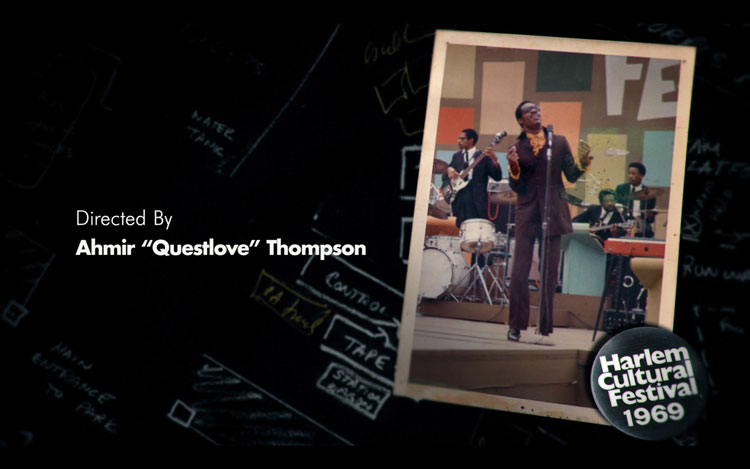 It was not entirely new territory for Miller, who has long worked at the intersection of design and entertainment. He’s also previously collaborated with Questlove (real name Ahmir Khalib Thompson), designing drum kits for the musician’s set on The Tonight Show Starring Jimmy Fallon. Just before lockdown last year, Questlove got in touch about the project which at the time still had the nickname of ‘Black Woodstock’.

Ultimately they opted for a photographic approach. Questlove was keen to reference the poster for The Jazz Singer – the 1980s film starring Neil Diamond and Laurence Olivier – which depicts the titular performer in a triangular lock-up with the film’s title. Borrowing that poster’s dual tone treatment for imagery also allowed the team to negotiate the sometimes-poor quality of imagery available, Miller explains. But while The Jazz Singer presents a solitary hero, Summer of Soul’s poster emphasises a collective spirit. 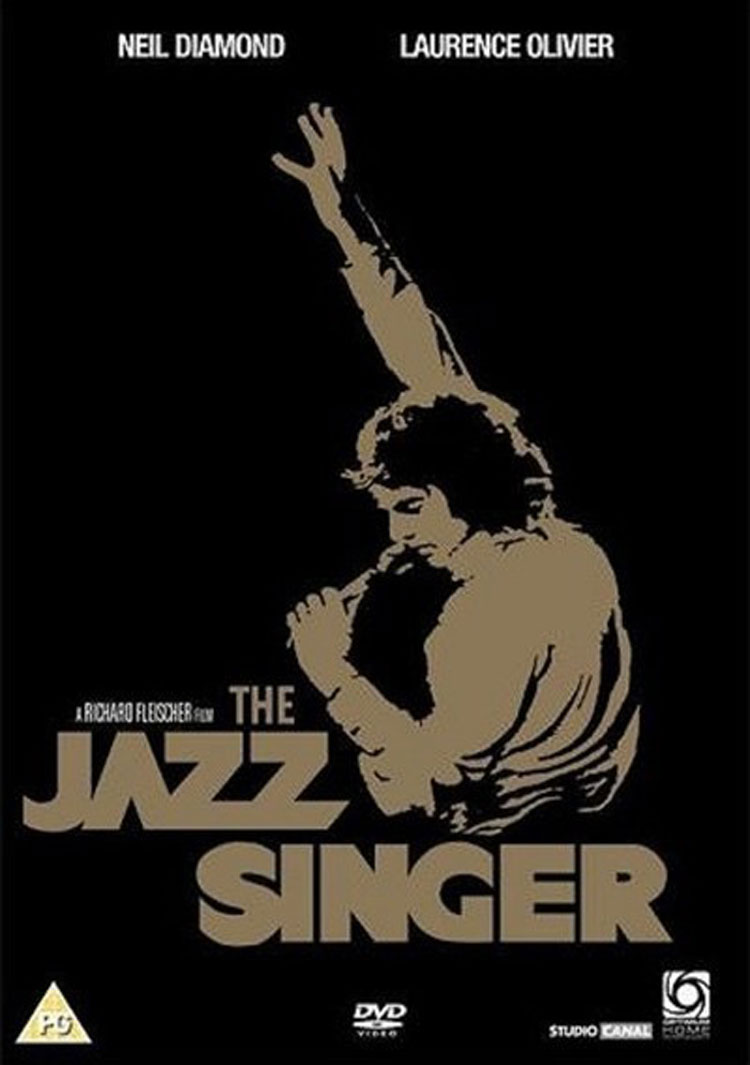 Images of the artists performing are positioned in a triangular formation, with Sly Stone at the top. Nina Simone also features in the line-up. “We definitely wanted to lead with some of the famous musicians,” Miller adds. “The artists are going be the heroes.” Audience shots fill the rest of the space. This goes some way in evoking the festival’s joy, but also prompts a more bittersweet observation from Miller.

While the team was working on the poster, George Floyd was murdered by a police officer – a death which caused mass protests not only in the US but around the world. “As we showed this dense group of black faces in Harlem on the poster – there for a joyful concert series – we also saw similar images of tightly knit people who were marching for something less joyful – not joyful at all,” Miller says. 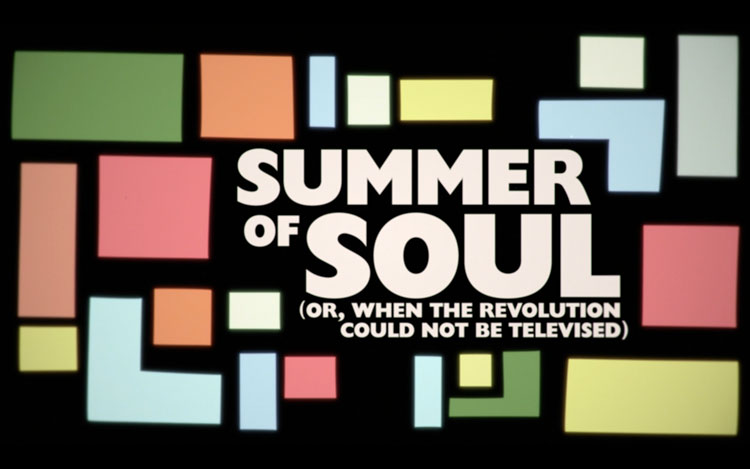 That circularity is echoed in the film itself where festival-goers speak about their basic human rights not being valued, Miller explains. “It’s 2021 now and you’re still fighting for basic things.” This cyclical nature is also reflected in depictions of black people in contemporary media, and how black music became a soundtrack for social movements in the 60s and 70s, Miller continues.

“We wanted to reference and pay respect to that,” he says, while also capturing the spirit of the film’s footage. “There’s nothing better than want watching people enjoy free concerts with artists they’ve always wanted to see, especially when everything else in their life is substantially more difficult than the afternoon they’re having,” Miller adds. “Watching the film feels like a love letter.”

Miller was careful to include buildings that border the festival site of Marcus Garvey Park – formerly Mount Morris Park – so that it would be familiar to anyone who had visited in the last fifty years. “You get a sense of place,” Miller says of the poster. “This is Harlem.” That sense of place is also drawn out in the colour palette, inspired by the festival’s stage design.

The backdrop for artists depicted Tetris-like shapes in 60s hues with ‘Festival’ written in what Miller calls an “off kilter” typeface. That backdrop had actually been reused from a different festival, according to the designer. “It was decidedly 60s running into the 70s,” he explains. “It was the Space Race, Motown records, moving away from quartets and happy-go-lucky soul songs to seminal albums from Stevie Wonder that speak to very specific moments in social justice and civil rights in the United States.”

But while the pattern may have belonged to the former decade, the colours were helpful for injecting vibrancy into the graphics, Miller explains. Questlove was mainly sending black-and-white band T-shirts as inspiration and Miller knew that he wasn’t going to get any colour from the photography. The designer created the colour swatches, using a slate black as a sixth shade, which are featured not only in the poster but throughout the film – in title sequences, transitions and the credits.

Miller chose Futura for the poster’s title, while all the lower thirds use different weights of the typeface. “Those bold heavy uses of Futura were pulled from the earlier contemporary flyers and advertising that was done for the festival,” he says. He also considered creating a font from the festival backdrop and Questlove’s own handwriting, though neither fit the tone of the design, according to Miller. An “old-timey, soiled paper texture” has been incorporated which hints at the “overall vintageness of the lost footage”, he adds.

“Was that revolution stifled?”

While mining contemporary visual references was key to the research, Miller still wanted the designs to feel modern. The colour blocks, for example, have been cut with exact angles rather than the more “expressive” designs they’re inspired by. He adds the sans serif “blocky” font is the most modern element of the poster. These more rigid graphic elements allow the celebratory elements of the show to come through, he explains, while also giving the design a modern edge. “Straightening things up and letting the organic shapes be the people, that makes it feel less late 60s and early 70s,” Miller says.

Arguably one of the poster’s most important elements was a late addition. The subtitle – (…or, When the Revolution Could Not be Televised) – was incorporated towards the end of the design process. Questlove often uses long titles in his work, Miller notes, and Summer of Soul is no different. While playing on Gil Scott-Heron’s poem and song The Revolution Will Not Be Televised, the subtitle also touches on the documentary’s exploration of wider social issues.

The festival – which took place at a “seminal point in history” for African American rights and socio-political issues – was only broadcast on television for one episode, Miller explains. The mystery prompts a slew of questions from the designer: “Was that revolution stifled? Why wasn’t it televised? Did they not want you to think it was interesting?”

It also happily ties into some of the design inspiration, he explains. Miller was intrigued by the attention-grabbing type work on film posters such as Claudine, whose tagline asks: ‘A heart and soul comedy. Can you dig it?’ Not wanting to interfere with the crowd shots or Sly’s head, Miller kept the resonant tagline at the bottom of the poster. “We made sure to have the text at the bottom and leave some space for the Sundance awards should they win – which they did.”

Summer of Soul (…or, When the Revolution Could Not Be Televised) is out at cinemas and on Disney+ now.