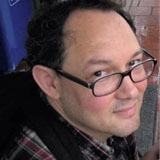 Roger Langridge wanted to be a cartoonist since the age of six – and he stuck with his childhood dream, making it big on the alternative comics scene. Yolanda Zappaterra talks to the creator of Fred the Clown

To look at him, you wouldn’t think cartoonist Roger Langridge’s imagination was the kind of place in which characters as weirdly surreal and frankly mad as the Gump, Knuckles the Malevolent Nun, Fred the Clown and Art D’Ecco (not to mention Art’s brother Art Nouveaux) could reside. These guys all look like they belong in the head of Eraserhead, but with laughs. Whereas Langridge looks like an amiable TV producer, the kind of guy who’d be making things like the Fast Show or Green Wing, offbeat TV comedies that, when you come to think of it, aren’t actually that far away from the kind of work and world he is producing.

Not yet a household name but quietly building a strong following in alternative comics, New Zealander Langridge has created a range of characters over his 39 years that are hard to categorise and harder to describe. He says they’re inspired by everything from the Goon Show to British kids’ comics and 1920s and 1930s American newspaper strips. But that doesn’t really account for the tasteless jokes, the bawdy and groan-out-loud puns and wordplay, and the mad narratives and anarchic visual styling, which are unlike anything else around. 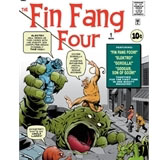 With younger brother Andrew, Langridge has just published The Louche And Insalubrious Escapades of Art D’Ecco, a new collection containing material that goes back to the brothers’ first mini-comics, devised almost 20 years ago as ‘part of the way we used to communicate. We used to just come up with loads of stuff that would make us laugh, and eventually started turning them into comic strips,’ recalls Langridge. For him, this was a natural progression from a decision made at the age of six. ‘That was when I decided I wanted to be a cartoonist,’ he says, citing Disney’s Carl Barks as a factor in his youthful decision. ‘I was looking at his stuff before I could read,’ he says.

While most kids grow out of such phases, Langridge’s desire never really deviated (though he says a college flirtation with drama proved useful in understanding pacing and timing), it simply grew as he discovered more and more artists and comics – human and printed – Chuck Jones, Charlie Chaplin and Buster Keaton, comics strips like Krazy Kat and Little Nemo, and the absurdist off-kilter humour of Spike Milligan.

‘He was a revelation; his framing, rhythm and comic timing were to me what comedy was about, and made me decide I wanted to make comedy like this,’ enthuses Langridge. And indeed his panels have a flow and pace that are as breathless, absurd and delightfully surreal as anything by Milligan, but they also have a fantastic visual flair that is all Langridge’s own. He disputes his artistic skills, saying, ‘I still don’t think I’m the best illustrator, but, in deciding to be a cartoonist, it was a question of working out what I wanted to do and filling in the gaps.’ Fortunately for Langridge, a parentally persuaded English degree at the University of Auckland let him fill in those gaps (or ‘three years o play around,’ as he puts it). It was also a great place to meet like-minded creatives who were publishing anthologies, comics, magazines and newspapers that required his talents. It was here, with contemporaries like Cornelius Stone and Dylan Horrocks, that Langridge created and developed the idiosyncratic characters that have become his trademark, but to make his name Langridge knew he had to get to the UK or US. ‘I was legally allowed to work in the UK, so that’s where I came,’ he laughs. 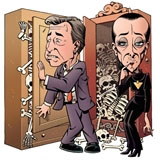 Here he discovered more great names – Tex Avery, Jack Cole, Will Eisner and Max Fleischer among them – and set to emulating their success with commercial work. As anyone who’s tried it knows, it’s frustrating and often doesn’t pay off, but for Langridge, it seems to – he came to the attention of many new readers last year when Fred The Clown, a weekly Web-strip that he’d been producing for five years, was published as a printed collection and surprised even Langridge with its success. It shouldn’t have; Fred is arguably Langridge’s most accessible character, one who – despite being smelly, generally despised and a perennial loser – wins you over with a cheery disposition and a level of frailty, humanity and trusting idiocy that acts as a perfect foil to Langridge’s darker, more cruel characters.

Langridge has said he could imagine Johnny Vegas playing Fred, and this is easy to imagine, but is something like that in his future plans? ‘I’m not hugely interested in taking my work into different media, though I’m not against the idea, and it would be fun to do something like a short Fred the Clown cartoon,’ he says, admitting that an attempt to learn Flash failed when the course was cancelled… but a Fred the Clown cartoon? Now that would be worth going to college for.