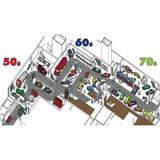 Coventry Transport Museum has appointed a design consultancy to revamp a number of its galleries in a bid to improve on in-house designs launched just six months ago.

RFA Designers has been selected to rework the Boomtime Boomtown Gallery and Commercial Gallery, following a four-way pitch against Real Studios, Continuum and HKD. The consultancy previously designed one area – the £140 000 Motorcycle Gallery – as part of the £6.9m relaunch of the museum in April which featured the original in-house designs (DW 6 April).

A budget of £400 000 has been allocated to the latest redevelopment, which is expected to be completed by February 2007.

‘It is a good recognition for the industry that using professional designers makes the difference,’ says RFA Designers creative director Richard Fowler.

Working alongside the museum’s curator Steve Bagley, the consultancy has been briefed to create spaces which use ‘established interpretative techniques’ as well as newer technologically driven communications. ‘The intention was always to redevelop the galleries in some way, after our minimal interpretation work was in place to get the galleries open again,’ says Bagley.

‘We are creating a roadway through the space which will give us control of the visitor experience and flow, perhaps imparting information with beam triggers and interactives,’ adds Fowler.

The Boomtime Boomtown Gallery focuses on the city’s manufacturing boom between the 1950s and 1970s; the Commercial Gallery is home to vehicles including buses, fire engines and tankers.