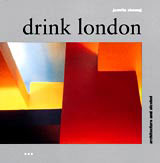 It’s hard to believe that such a person exists, but I’m one of a rare breed – a journalist who rarely indulges in alcohol. Because of this, Drink London provides me with a particularly interesting insight into the educated world of drinking and why one watering hole is preferred to another.

London architect Juanita Cheung has spent time selflessly trawling many of the capital’s bars, providing a detailed account of nearly 80 venues. Avoiding the pitfalls of indulging her architectural background, the authoress states in the introduction that “the significance of bar design lies in the unusual combination of high visibility and public experiment”.

“Distinctive trends are already beginning to emerge in the design of these bars. The importance of their design, however, rests not with any grandiose notion of architecture,” claims Cheung.

“They are not the monuments of our civilisation, they do not purport ot be our pyramids or temples (the worshipful adoration of the contents of a bottle does not count); they do not commemorate the power, wealth or taste of a ruling class,” she adds.

The 270-page publication is the latest in a range of pocket-sized books from publisher Ellipsis. It provides an unobtrusive addition to any bar crawl, fitting nicely into your back pocket while you hold a pint of beer or glass of wine in each hand.

Cheung notes that the book is a personal selection of bars of architectural significance, with choices ranging from the hyped up Met Bar – described as “a good place to wallow in misery” – to a “jolly little drinking place” in Clapham named Tuba.

“It’s a mixture of types, with a few eccentrics thrown in and even some outstanding examples of ugliness,” she states fearlessly.

The only major pitfall of the book’s size is the photography. Taken by Keith Collie, the photographs are black and white, and usually too small to get a good perspective of the establishment. As a book focusing heavily on design and appearance, this prevents the reader from getting a good visual idea of each bar, leaving them to rely more heavily on the text.

Neatly set out, the book uses language that is both easily understandable for anyone learning to appreciate the art of design, and extremely informative for those with more knowledge.

For people who have again failed to achieve their New Year’s resolution of giving up smoking, Cheung has also included a matchbox league table. Lab’s matches, designed by Ally, finish top, with ten out of ten. They are, says the author, “a beautiful reason to start smoking”, while Crescent’s zero-rated offering is labelled “uglier than sin”.

As someone unfamiliar with intricacies of the bar world, Drink London has certainly inspired me to explore some of the capital’s drinking establishments… and I might even have a pint!

Drink London by Juanita Cheung is published by Ellipsis on 9 February, priced £10.00