London design studio Morrama has revealed its Renew concept, which shows how mobile phones could be designed with sustainability in mind.

The concept has been prompted by modern phone ownership trends which are increasingly wasteful and expensive according to the studio. Customers have become used to at least two-year phone contracts and a monthly fee before expecting an upgrade at the end of that time period.

But with the price of a new phone now reaching upwards of £1,000, this model no longer works, according to Morrama, which notes phones do not need to be replaced this often.

How does Renew work?

Renew illustrates how the components of phones that are most prone to damage could be redesigned so that they can be replaced or upgraded — meaning that customers would never have to buy a completely new phone again.

The concept suggests a modular mobile design. The screen and battery could be separated from the main “computer” and each layer could therefore be replaced and swapped with ease.

When a new phone model is available, the new computer could be added to someone’s device. Aesthetic choices have not been forgotten — people would be able to change the colour of their phones when battery packs are changed. 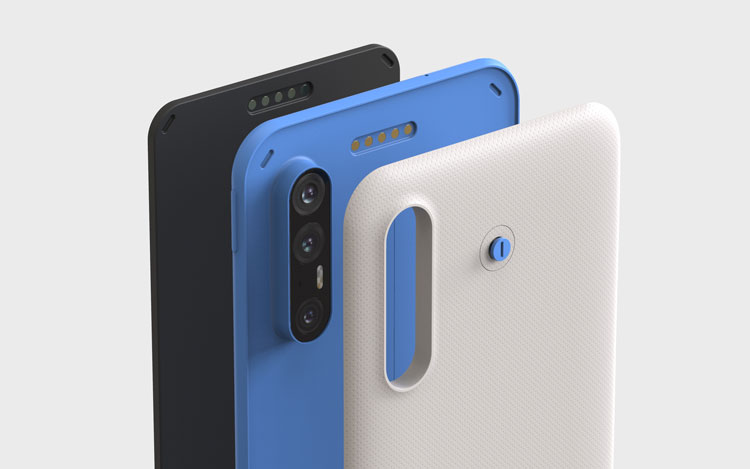 As well as a modular approach, the design of the phone itself is more durable. For example, it features a “recessed” screen which targets the problem of cracked screens.

Morrama founder Jo Barnard tells Design Week that this goes against recent trends in screen development, which focus on an “edge-to-edge display” or even wraparound screens. “While it looks slick in an ad, it is totally reliant on a separate case for protection,” she says.

This design removes the need for a case by improving the casing of the phone model itself — it sits on the screen, which especially protects it at the edges “where it is most likely to impact when dropped”.

The studio proposes using “nanocarbon technology” that is currently in development for the phone batteries — this is a favourite of high-tech battery developer ZapGo.

Morrama suggests using LCD for the screen. It may not be the most technologically advanced but it has the lowest power consumption, according to studio. Meanwhile, the computer and screen could be produced from a “corn starch bio-plastic” which is biodegradable. 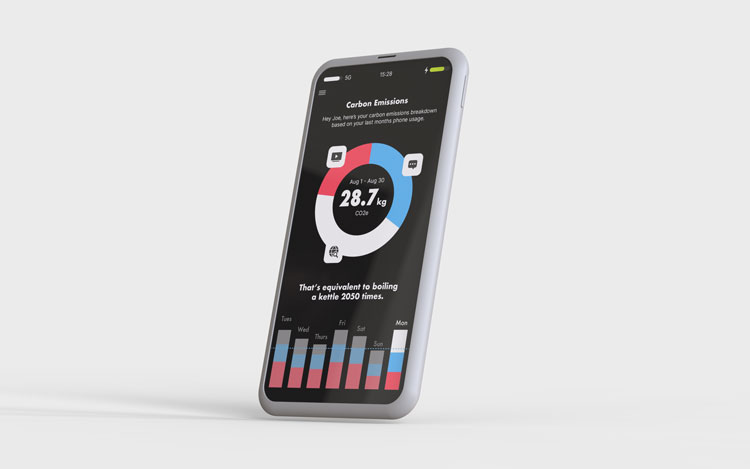 The studio has also thought about how sustainable behaviours could be encouraged, beyond a more environmentally friendly production method. According to research, half an hour of streaming Netflix generates approximately 1.6kg of CO2e (carbon dioxide equivalent). That’s the equivalent of boiling a kettle 114 times.

Barnard explains how an “interface” could track phone users’ activity and calculate carbon emissions. Once people have been made aware of their carbon footprint, they might make more sustainable decisions.

“The goal would be to encourage behavioural change to adopt more sustainable habits,” she says. As well as drawing people’s attention to hidden carbon emissions, it could suggest simple ways to make changes.

“Even deleting emails with large attachments or duplicate photographs can reduce the demand on energy hungry servers,” she adds.

This could also have positive effects for our mental health — reducing the “amount of time we spend glued to our phone screen”.

Renew is currently an internal project, through Barnard says that the studio is “very open” to discussing the idea with any interested companies.

Design Week recently featured the launch of a new tech brand which aims to create a more sustainable world for mobile phone accessories. Nolii takes a modular approach to phone accessories such as cases, charging cables and running arm-bands.