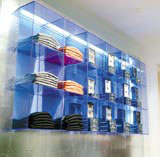 JHP is working on interiors concepts for German lifestyle brand Tom Tailor, as the clothing giant gears up for a series of retail openings across Europe next year.

The company’s first shop in the UK, a 350m2 franchise store and showroom mainly targeting wholesale buyers, is launched in Norwich next week (pictured).

According to JHP strategic director Steve Collis, the shop displays some of the new ‘flavouring’, but does not represent ‘the full Tom Tailor design’.

‘This project was already in the pipeline when we were brought on board,’ he explains. ‘We were asked to bring in some of the attitude we’d shown in the pitch, but this isn’t a model for future designs.’

The brief, which is likely to be worth a six-figure fee, involves refashioning Tom Tailor’s ‘physical incarnation’ at three levels – flagship stores, franchises and concessions.

Hitherto, the brand has been sold largely through department stores and independents. Collis likens its positioning to that of Tommy Hilfiger and Ralph Lauren’s Polo.

Product ranges cover casual-wear for men, women and children, as well as fragrances, accessories and jewellery.

‘We need to generate a strong brand perspective [on store environments],’ adds Collis.

He says this is likely to include a ‘generic approach’ to merchandising and fixtures, however, beyond that there will be a ‘twist to every store’ in the manner of retailers such as Zara and Mango.

A flagship in the west German city of DÃ¼sseldorf will be the first to witness JHP’s brand vision, followed by outlets in major German and European cities. Tom Tailor currently operates in 64 countries worldwide.

JHP creative director Raj Wilkinson is leading the consultancy team. The consultancy won the work in September after a four-way pitch against design groups from Belgium, Germany and Italy.

London’s transport is a world away from an oyster