Pentagram partner Yuri Suzuki has unveiled his new project for the design consultancy, a reimagining of the Electronium, described as an early example of AI and conceived in 1959 as an “instantaneous performance-composition machine”.

The brainchild of Raymond Scott, the American bandleader, composer and later director of record label Motown’s Electronic Research department, the Electronium was never realised during his lifetime.

A passion project for Suzuki

Scott was probably best known as the composer for Warner Bros’ Looney Tunes cartoons, but his strong belief that the future of music would be electronic and, as he took on his position at Motown in the early 1970s, increasingly computer-generated, has seen him hailed as one of the 20th century’s great musical innovators and thinkers, as well as a trailblazer for electronica.

Suzuki has long been a fan and remodeling the Electronium and has seem this as something of a pet project. The Japanese designer wanted to recreate the original concept as software, bringing it up to date with the use of contemporary, true AI. Scott’s vision was of a device that responded to sequenced melodic phrases to compose instantaneous pieces of music.

Scott’s plans died with him

The highly complex undertaking was made harder by the highly-secretive Scott’s reluctance to let anyone near his research notes. He spent the best part of 11 years working on the machine while at Motown, but would generally avoid writing down anything too detailed (he died in 1994, having suffered a severe stroke in 1987). Suzuki’s team got lucky when they stumbled across a cache of unpublished schematics and notes during their research and were able to get a more detailed understanding of how it worked and what it was capable of doing.

Suzuki brought the project to bear by working with AI studio Counterpoint, which used Google Magenta AI software to create an adaptive system, which can “learn”. 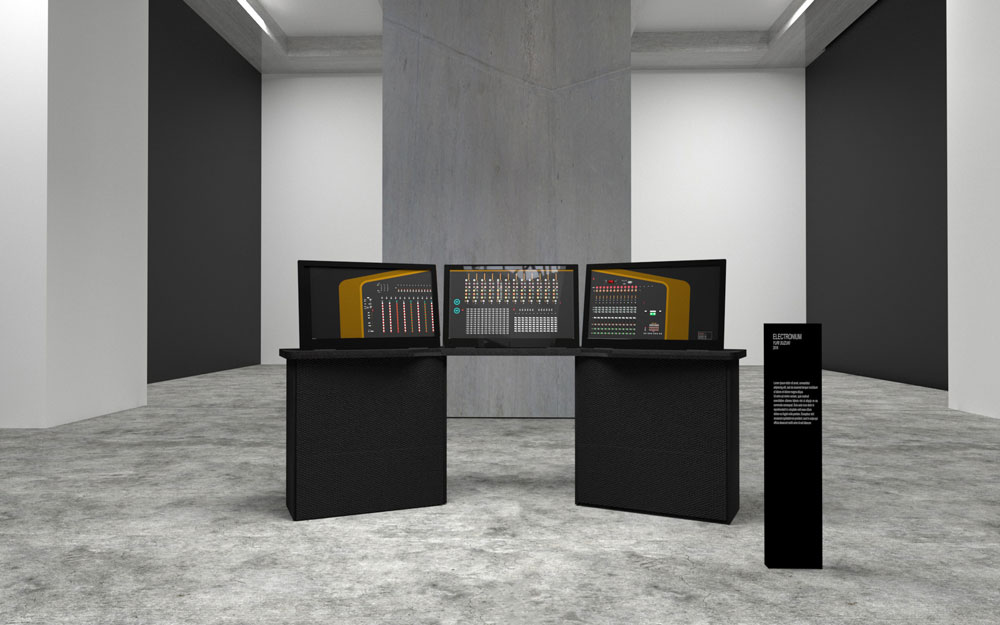 With the blessing of both Scott’s family and the Electronium’s current owner, Mark Mothersbaugh, singer with alternative rock pioneers Devo, Suzuki was careful that the software didn’t stray too far from the look and feel of the drawings, plans and endlessly modified prototypes and kept a pleasingly retro feel.

“We took special consideration in retaining its visual aesthetics while omitting any redundant functions,” Suzuki says. He did, however, attempt to make things a little easier for anyone wanting to explore the possibilities of composing music. “Because of the way it was built originally, users have no way to tell where they are in a sequence, so we’ve added an extra explanation layer to help players visualise the connections between the different parts of the machine.”

Former Motown boss Berry Gordy saw Scott’s Electronium as a great generator of song ideas to keep the fabled Hit Factory in business. The idea now is for the Suzuki’s update to function as a serious compositional tool, one to inspire and stimulate creativity, and to present another example of how AI is increasingly impacting our daily lives.

Suzuki’s Electronium will be on show as part of AI: More Than Human exhibition which runs from 16 May – 26 August at The Barbican Centre, Silk Street, London, EC2Y 8DS.