Cardboard is in demand. As shops have remained closed during the pandemic, online retail has rocketed, and with it the demand for cardboard packaging. Throughout the past year, there have been reports of both a cardboard shortage and rising prices for the material. More recently, it’s been impacted by Brexit supply chains and the Christmas shopping surge. Though it’s a challenge, it’s also prompted a rethink in packaging design.

“Clients want to do something different than a basic cardboard box,” Morrama founder Jo Barnard says. The designer points to people’s fatigue where endless Amazon boxes, where products are frequently shipped in disproportionately big cardboard boxes. “We need to establish a mindset for Amazon boxes,” she says. Often the product comes in packaging that is already suitable to ship without an extra box. A simple solution like this could be a significant way to reduce cardboard waste, according to Barnard.

“If you’re going to package the product anyway, consider the structural packaging a little bit more,” she adds. This can be a helpful cost-cutting measure for brands. Last year, Morrama designed the product and packaging for refillable deodorant Wild, which can be shipped in its letterbox-sized packaging. The studio also designed pocket-sized coffee cup Hunu which can be shipped in a large letter, though she adds that there are problems when people order multiple products.

Apart from cost, rethinking the “mountain of packaging” can help brands stand out, Barnard says. She recently received an order from outdoor brand Finisterre where the product came inside a biodegradable bag which dissolved in warm water. “The material is exciting because it changes my perception of a brand,” she says. “Everything comes in a cardboard box. So as soon as you receive something that doesn’t, you’re immediately more likely to talk about it, share it, Instagram it,” Barnard explains.

There are wider issues at play, Barnard points out. In the future, it’s likely that companies will need to consider closed-loop systems where products can be returned in the packaging they arrived in. “The biggest barrier is behaviour change,” she says. Customers won’t want to go to a post office to return a parcel, so there should be some incentive, according to the designer. 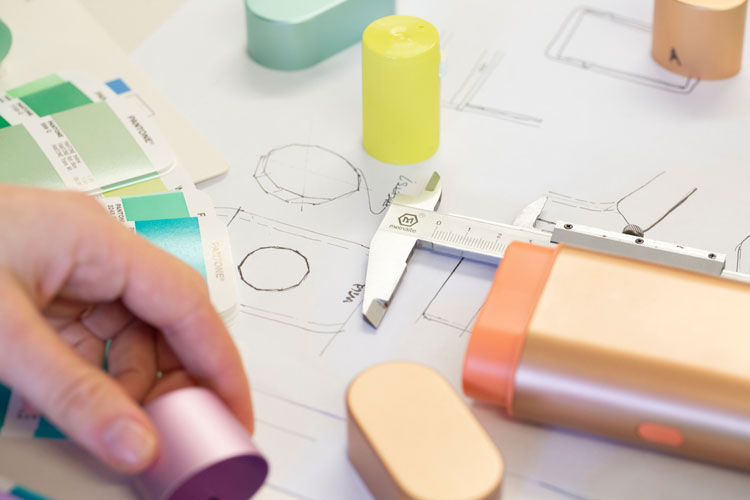 As well as being light, easy to rip up and cheap, cardboard has sustainable advatanges. It contains a high percentage of recycled material – sometimes up to 80%. However, this has caused a problem during lockdown. “We don’t have enough of the fibre and that’s partly because the whole system has shifted overnight,” Seymourpowell CMF strategist Katie-May Boyd says. Many of the biggest sources – paper from offices or boxes from bars and restaurants – have been unavailable for much of the past year. “It’s cut off that stream that was really developed,” she adds.

Part of cardboard’s rising popularity is down to a “social shift” in customer behaviour. People view cardboard as automatically more sustainable than a material like plastic, which is not always true. Boyd draws attention to this with a recent example of egg boxes. During last year’s shortage, supermarkets replaced cardboard egg boxes with plastic alternatives. And while reports have indicated that PET plastic boxes are more sustainable than paper one, shops have since announced they would switch back to cardboard when possible.

Barnard echoes Boyd’s concerns about these preconceptions. She points to glass milk bottles, which people often think are more sustainable than plastic. However, a glass milk bottle has to be reused around 19 times to offset its emissions and they usually break or are discarded before this.

Despite this complication, Boyd says the shortage is helpful for innovation: “It’s good to show us we can be reliant on single sources.” Recent years have seen more innovation in meeting the “huge rise” in demand for cardboard, according to the designer. One of these sources is Graspap, a paper fibre made from grass. The fibre uses about 75% less carbon dioxide than virgin wood pulp and crucially is a renewable source. “When you cut grass, you don’t kill it like you would a tree,” Boyd says, also highlighting how it can grow in lots of different landscapes.

The pandemic has provided plenty of opportunities to think about materials, and Boyd says that the studio frequently considers changing retail habits. As part of its material library, Seymourpowell has Flex n Seal shipping roll, developed by 3M. This could provide a solution for the problem of unwieldy boxes, according to Boyd. The self-adhesive material sticks to products, protecting it in a paper-covered bubble wrap material. “You’re using less material and you can fit more parcels in a van,” she says.

It’s key that materials balance sustainable ideals with a good customer experience. “If you’re designing something to be used several times, you need to be sure that it looks desirable by the third or fourth time,” she adds. Paptic is a good example of this, she says. The material – somewhere in between paper and cardboard – feels like the label on the back of a pair of Levi’s jeans, Boyd says. Material like this is useful for a send and return scheme as it lasts and still looks good, the designer explains. It was tested by Finland’s post department in 2019, where its parcels circulated twice as many times as the regular ones.

Boyd also lists mycelium packaging as a potential alternative, though this requires a longer time to grow. “It isn’t as useful in that respect,” she adds, “but you can literally throw it out the window.” The studio has also looked into a supplier that produces “micro encapsulations of scent oils”, which is essentially modern-day take on scratch and sniff packaging. “Physical things seem much more important now,” the designer adds.

Even when lockdown ends, it’s likely that online shopping and direct-to-consumer business models will continue to gain traction. Echo studio co-founder Andrew Capper says that this shift provides both “a huge challenge and a huge opportunity”. At the moment, packaging is being designed for the retail shelf primarily and then packaged for shipping. “Once you take out the fact that it’s sold in a store, it creates real opportunity to consider things differently,” he says. “We’re still designing for the shelf, and I feel that going forward there will be a parting of the ways.”

This “parting” will take place between products – Capper believes it will be high-value products that remain in stores like coffee or craft beer – but also brands. Start-ups like Wild have made the most of this opportunity, he says, as they have “baked sustainability into their DNA”. It’s more difficult for heritage brands to adapt. “If you’re Marmite or Smirnoff, it’s really tough but they have to put a toe into this water,” he adds.

The difficulties will not only be changing supply chains but also “reinventing rituals”. “It really is a brand-new world,” Capper says, and packaging will be essential to that. “You don’t delineate between product and packaging,” he adds. All three designers note that the refillable sector is ripe for packaging development but the “experiences and rituals” around these products will have to be considered, Capper says.

Crucially, he believes that the packaging has to tell a relevant story. “It doesn’t mean anything unless it’s rooted in the brand,” he adds. “You can make a plastic out of sugar cane, but it becomes exciting when you’re working with Silver Spoon and the packaging is made from a by-product of their process,” Capper says.

The ambition to tie in packaging design with branding is a theme of upcoming projects. Echo is currently working with a pasta brand which is looking into new materials, for example. The company was adamant about not using packaging that would divert sources away from food crops, according to Capper. Instead, it’s looking to focus on materials made from waste.

The studio is also working with a spirit brand on a sustainable packing project – looking at plastic alternatives that relate to the brand’s country of origin. “It means that they can tell a cohesive tale to their customers about how and why they’ve changed,” he says. “It’s good for the brand and environment.”