Craftivism – spurred on by sustainability and time indoors – has gained popularity during lockdown. The environmental movement to make your own clothes also inspired Pattern Project, a new venture from London design consultancy Hetco. The data-focused consultancy – co-founded by Simon Johnson and Shruti Grover – works with clients such as the BBC and the Wellcome Trust. Pattern Project is a custom-fit clothing kit, made on demand by a low-emission, lightweight machine. The start-up was a chance for the co-founders to see a project all the way through, on their own terms.

Grover has a background in manufacturing, having lived in India until she was 25, where she often visited tailoring stores . A few years ago Grover began to sew. She saw the activity as a bridge between Indian and British cultures. “Why is there not something that fits into the cultural landscape for the love of sewing with a digital aspect?” she asked at the start of Pattern Project in April 2020.

The paper pattern kit takes some of its design language from paper patterns which were a popular way to make your own clothes at home with some people until the 1990s. Interest in this had waned in recent decades but there are several reasons it may catch on again.

The kit comprises fabric panels that have been cut and annotated so that people with basic sewing skills can produce their own garments. In the beta phase it’s a relaxed-fit, non-gender specific top. The kits cost £45 each and the designers say that the money saved on sewing is spent on high-quality fabric from the UK. “The savings on sewing are passed onto the customer in the form of better fabric,” Johnson adds.

This “human-centric” manufacturing kit is also influenced by the movement against fast-fashion. Grover says that people are familiar with the “dehumanising” process that many clothes are made: “You know all the clothes are made by hands that are not happy”. Sewing your own product creates a bond with the clothing, the team says.

The start-up was set up with funding from an Innovate UK grant, and was originally supposed to work as a “little factory on the high street” where people could configure their own garments and take away the component pieces.

The designers won the grant money just before the first lockdown which meant that the physical space had to be rethought. Having to change gears has had pros and cons as now the kits are being sent out to people to make from home on their own sewing machines.

The social side of things – especially building a community around the project – has been a challenge. “You can’t really get visibility without a lot of digital ad spend,” Grover says. But lockdown has potentially seen more people taking up craft hobbies, and people are definitely thinking about their interiors more. “It helps you appreciate the skill that goes into making clothes,” she adds. 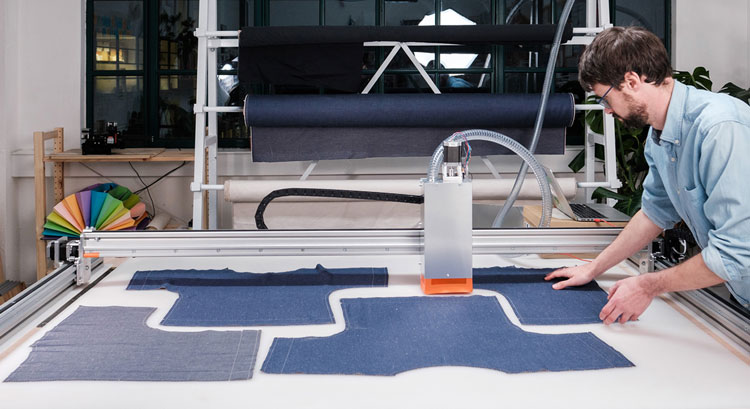 The team says that learnings from Hetco was used throughout the development, from user research to prototyping digital functions like AR. Ultimately the technology did not feel appropriate for the product, but the team is developing an online interface which would allow customers to design a more bespoke fit and adjust patterns accordingly. Though it’s not fleshed out fully, they hope that there could be a “live stream” which would notify people about their garment’s production so that there’s a full connection with the process.

“It’s an on-demand pipeline that is actually scalable,” she says. They also hope that the price will be driven down in the future to make the kits more accessible. Future options will include women’s and men’s briefs. “We want to offer something different to the traditional retail offering,” Grover says. “Once you start sewing, you’ll see clothes differently.”

A property platform to fix “inefficiencies”

Hetco is not the only studio to explore new avenues in recent times. London studio Dn&co has used its experience in property branding projects to launch a new presentation platform Showhere. “Decades of consultancy to the real estate industry all over the world have built our experience of storytelling as a tool to generate sales and drive business growth,” Dn&co director Joy Nazzari says. The new platform aims to “digitally fix inefficiencies” within the sector by allowing clients to present their property in more engaging way.

The studio’s creative director Patrick Eley hopes that the platform will put a stop to endless PDFs. “People don’t just tell linear stories anymore,” he adds. “They jump back and forth through a presentation to create a narrative that suits who they’re talking to at the time.” 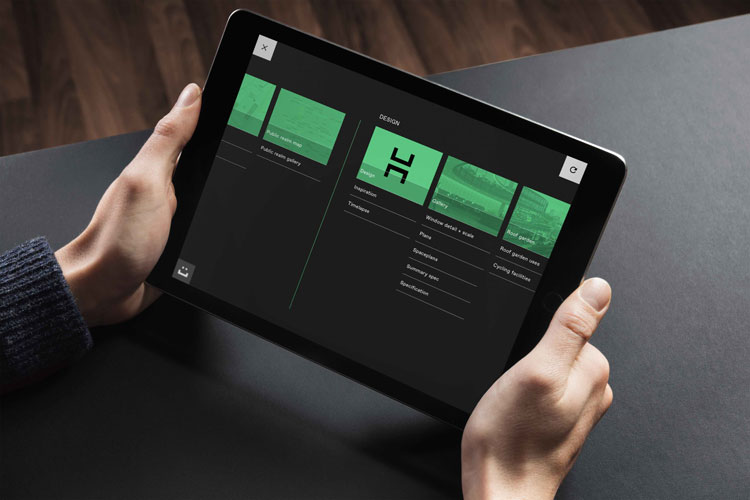 While the co-founders say that years of experience have influenced the product, the pandemic has propelled its development. At a time when on-site visits and face-to-face interactions are limited, the digital experience needs to be compelling. Even when restrictions end, it will hopefully be a useful tool for international clients and in-person presentations, the team adds.

Showhere is a fully-owned subsidiary of Dn&co, an addition which will sit alongside the studio’s publishing imprint Place Press. “It’s definitely not a side-door project,” Nazzari says. The studio has a team of 30 members and about four people are dedicated to Showhere right now. Nazzari says that the studio is looking to expand by the end of the year and she expects that the Showhere team will eventually look for its own space outside the studio.

Much of Showhere’s storytelling relies on compelling information design, which provides an edge over traditional presentation software, Eley says. He gives two examples. One is for London’s Post Building, where an animations highlights the office’s lofty ceilings, in comparison with the capital’s average. The second is an animation which shows the increased transport possibilities to central London locations because of Crossrail. “It’s using interactivity to create memorability,” he adds. “You can’t do that in a PDF.”

The team has used its experience in the sector to finetune the platform’s detail: everyone always has the latest version of the presentation, it works offline in case of spotty Wi-Fi, and importantly it gives the presenter full control. “All these actual real-life experiences have entirely formed the final product,” Nazzari says. While Dn&co is focusing on the property sector for now, the automotive industry is ripe for this kind of product, Nazzari adds.

“The booth of the future”

Perhaps the hardest-hit sector of late is events. Last year, Bristol-based exhibition design studio Ignition pivoted to create a digital service for its clients, whose events could no longer take place. Digital project director Alex Saxon joined the studio in August to head up a new department and create this virtual platform for clients. He works with a core team of around five people comprising digital designers and tech developers. In the long term, Saxon expects that exhibitions of the future will have a “hybrid approach”, incorporating both digital and physical events. What he calls “the booth of the future” will likely make use of VR, motion gesture and touchless demonstrations.

In the midst of the pandemic last year however, virtual was very much the focus. Over the summer, Ignition designed a virtual version of a women’s leadership forum for an American bank, for example. The platform featured a tour of downtown Indianapolis, where visitors were guided through an imaginary bank, complete with details such as a video greetings from the CEO. In the lobby were information points about Indianapolis landmarks that related to women’s history. There were interactive conversations throughout. On average, visitors spent three and a half hours at the virtual venue.

Designing for an uncertain future

In September, the studio also designed a virtual showroom for healthcare provide Lilly at a European diabetes symposium. This immersive experience presented visitors with interactive models of devices as well as water feature sounds. There was also an animated host character which guided viewers on arrival, with live updates. Saxon says it’s impossible to fully replicate the atmosphere of live events, but the studio aims to design as many “engage techniques” as possible.

“Doing that pivot last year meant that the studio had to upskill their 3D skills for events and spatial design and transfer them to an interactive environment,” Saxon says. Moving forward, he hopes that the digital solution is scalable and can work for companies of different sizes.

“The events industry has taken a real kick-in-the-teeth,” he says, and it’s still an uncertain roadmap ahead. Saxon adds that it’s not clear which events will return or when, or how many visitors will be able to attend. But when things resume, the new platform will be crucial for implementing restrictions such as social distancing and reassuring visitors. “Digital will play an integral part in making people feel confident about going to events again.”