“There will be a natural return to flying,” Adrian Berry says. “But it’s a huge responsibility from the carriers to look after you as a passenger, and it’s also about building confidence.”

Berry is director of Factorydesign, a London-based design studio that focuses on passenger experience and cabin interiors. It has previously worked on Virgin Atlantic’s ‘upper-class loft’ and Delta’s business suites. Following coronavirus – and its halting of the aviation industry – the studio has worked to find solutions for safer travel. On both sides, there is clear demand for a resumption of travel, with safety precautions. Passengers, with cancelled summer plans, want to get away. And the aviation industry faces huge financial pressure; the International Air Transport Association estimates that the airline industry could suffer a loss of revenue between £50 and £90bn in 2020. 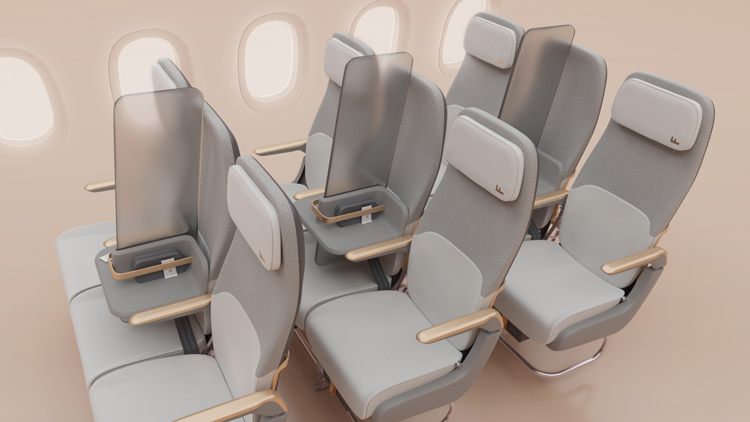 One of Factorydesign’s concept is the Isolate screen divider kit, which seeks to transform a middle seat in a row of three into a “reassuring screen”. It’s a lightweight table top, which has a translucent thermoplastic – so that light can flow through the cabin – that provides distance between customers. It’s also modular so that it can be put in an outside seat, if a passenger wants distance from the aisle.

Another design is the HeadZone, a passenger divide system that can be retrofitted to the headrest of aircraft seats. It’s been primarily designed for short haul flights without In-flight entertainment (IFE) and creates an “important space” so that passengers feel some “control” over their personal space. It’s made out of recyclable material and the studio is looking to make the inner surface out of an anti-microbial material. The design could be branded to match any airline, and become a place for sponsorship (many low-cost airlines rely on selling extras to make money).

HeadZone is part of a wave of short-term solutions, where passengers need to be “reassured” by visual cues, Berry says. There has not been a shortage of these concepts in the wake of coronavirus. “You could possibly argue that all the ideas that have been launched recently about providing separation are as much about building confidence as they are about practical solutions,” he adds. It’s about passengers being able to feel like they “own a little bit of space around them for a while”. Another obvious visual cue would be for cabin crew to wear personal protective equipment (PPE) – and most airlines are insisting on passengers wearing them too. 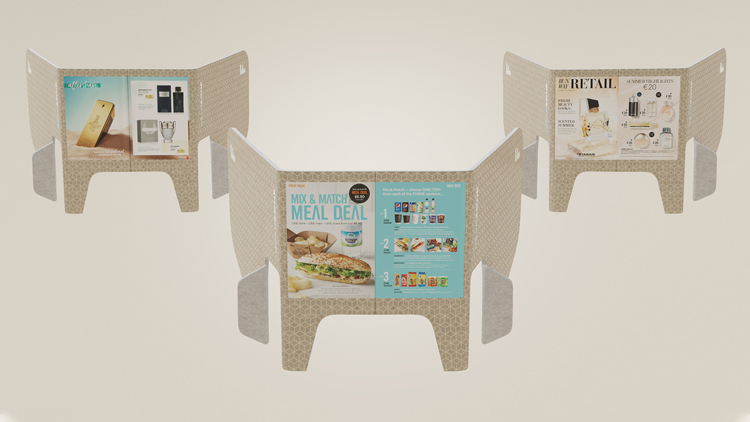 A big part of the return will be around communications, Berry says. Modern aeroplanes have high-efficiency particulate air (HEPA) filters, which can kill airborne viruses and provide a relatively clean environment – and going forwards, it will be important to make passengers aware of that. “It’s about emotions for people – reassurances that things are clean, that the plane is properly looked after,” Berry adds.

EasyJet has already resumed some flights and revealed its safety precuations about post-coronavirus travel. This takes into consideration the pre-flight – masks will be mandatory, as will socially distancing, boarding passes must be downloaded in advance. There will be “advanced disinfectant measures” between flights. A safety video also focuses on the HEPA filters, which means that the cabin air is replaced every three to four minutes, according to Aeromedical Consulting CEO Michael Fonso. It varies according to airline, and the type of services they offer. Virgin will, for example, offer a “simplified” hot food service to minimise physical contact between people. The airline will also provide passengers with a personal health pack, containing a medical-grade face mask, hand gel and surface wipes.

“Airlines are starting afresh in a funny way,” Berry says, hinting at the potential for innovation in aircraft design. Material research is going to be a “huge part” of this, he says. Anti-microbial features will be of interest to see if the seats could resist viruses in the first place. Metallic inclusions in fabric – like copper or titanium – have also been much-talked about solution for product design and the same will be on aeroplanes. Any fabrics will also need to be resistant to the “harsh” cleaning products, Berry adds.

Other fields might be “accelerated” by COVID-19. The prospect of a ‘UV wash’ has long been talked about inairplane bathrooms, for instance. This would work by sanitising bathrooms with a UV light when they’re not in use. A potential problem with this, Berry notes, is that the only UV that kills coronavirus is UVC which is “not very good” for humans. It’s an example of the limitations to these design solutions, and indicative of the complicated path forwards.

The designer also expects IFE to look very different. The prospect of using a screen touched by passengers multiple times will not be appealing, so Berry suggests a re-focus on personal devices. Being able to connect your phone or tablet to the system and use it as a controller will be a much more attractive option for passengers. He says this is “already partially happening” and expects the crisis to propel it.

The knock-on effects of COVID-19 will clearly be huge, but Berry warns against any knee-jerk reactions: any drastic changes to seating configurations, for example, might look rash in two years’ time. There’s also a financial aspect to this. “Anything an airline does to change a seat, or even the dress covers, is a very expensive and complicated process,” he says. The process of regulation is lengthy and the cost could run into millions for changing something like seat covers could be hundreds and thousands, if not millions Berry estimates.

Designing for an unknown future 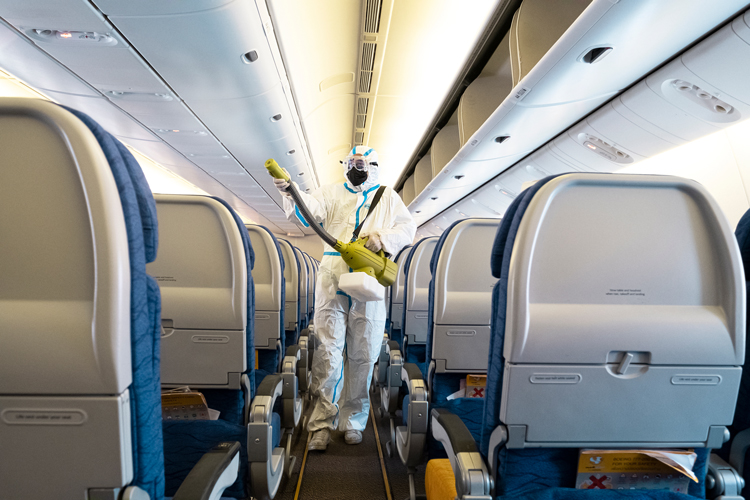 “The difficulty is predicting what’s after COVID,” PriestmanGoode co-founder Nigel Goode says. The design studio specialises in transportation design – a recent design takes passengers to the edge of space – and like Berry, Goode agrees that it’s about reassurances for passengers in the short term. Social distancing, he says, is “not going to happen” onboard flights. The only reason why airlines are doing it at the moment, he says, is because of low load capacities.

Will there come a time – after a second wave or when COVID-19 is a more manageable part of daily life – for a more permanent shift in aircraft design? “Our work as designers starts here,” Goode says. He thinks we should be designing new interiors now for aircraft available in around three years. And Goode doesn’t think this is a “flash in the pan issue”: design should incorporate concerns that the pandemic has raised.

Goode says he is pushing airlines to think about these design solutions (though the difficulty is is that they’re currently “haemorrhaging” money). In mid-July, the studio is unveiling pressing design considerations for the aviation industry. “It’s going to affect things like 9/11,” he says. “It didn’t stop people travelling but it made people more security conscious – for passengers and airlines.”

In the more premium classes, passengers have wanted their own separated spaces for a while now, and that trend will only continue, Goode says. Most people are used to economy class, however, and the designer predicts that there could be a “watershed moment” for the cabin. A revelation that “people have been squeezed too much into spaces” might occur. He asks: “Can we change the configuration and make it more comfortable for people?” Goode admits that this change is reliant on a shift in a business model which relies on cheap seats and expensive extras.

“The transition right now is survival” 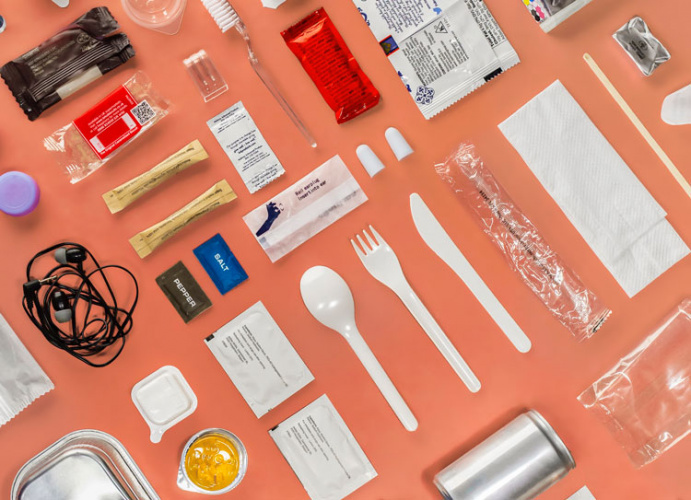 One positive aspect about reduced plane travel has been a fall in emissions around the world – a 17% fall in carbon dioxide was recorded in April. While it is unlikely that people will no longer want to travel altogether, a climate crisis movement had been developing around reducing plane travel. Most notably, last year, Greta Thunberg took a boat across the Atlantic. For this reason, both Berry and Goode say that a fertile area for design could be around premium economy. If people fly less often, and are willing to spend more when they do so, there’s potential for design experimentation around these classes. (PriestmanGoode has an eye to sustainability – last year the studio put on a exhibition about industry waste at the Design museum.)

“The transition right now is survival,” Goode says. “Our clients are thinking: what’s going to happen next week? Or next month?” So long-lasting design solutions will take more time. But I’m incredibly optimistic about the future,” Goode says. While coronavirus is not a positive thing right now, it has reinvirogated a “stagnating” sector, he says, and provided an “impetus” for change.

Lock maker Yale rebrands for “warmth” and a digital future