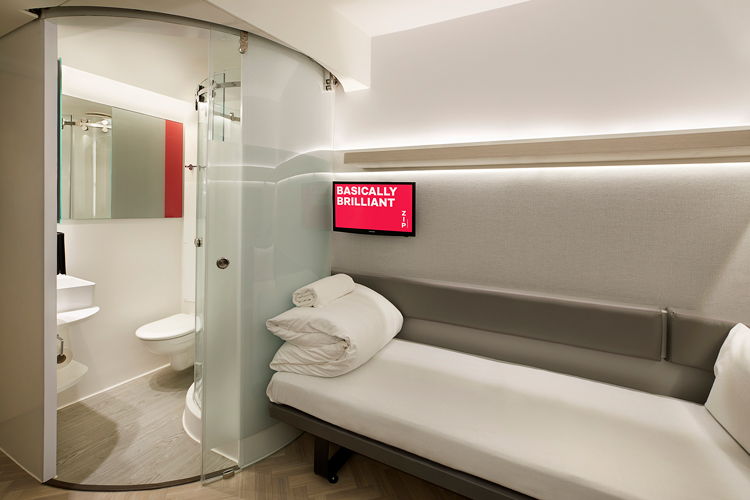 The hotels, which are called Zip by Premier Inn, will be based on the outskirts of big towns and cities in the UK, with the aim of providing budget hotel stays out of the city centre.

The first Zip by Premier Inn hotel will have 138 rooms and will open in Roath, Cardiff in early 2019, with the second one opening in Southampton with 140 rooms.

They will have small rooms starting at £19 per night, which are less than half the size of a standard Premier Inn hotel room at only 8.5 square metres, and are aimed at “guests on a particularly tight budget”, says Alison Brittain, CEO at Whitbread PLC.

The rooms have been designed with the concept “basics done brilliantly” in mind, and feature a minimal colour palette of white, silver and grey with flashes of red, a small window, and an ensuite power-shower, toilet and sink.

They also feature lightboxes and a digital screen for displaying information, flexible bed formats, where customers can choose between twin-beds or a double, a television, air-conditioning and free wifi.

The hotels also have communal spaces, which include a breakfast-area-turned-bar, and an ironing room on every floor.

Brittain says that the new hotel concept will give Premier Inn “access to a broader customer base”.

PriestmanGoode has previously designed first class cabins for airlines including Air France, Lufthansa and Swiss alongside trains for Virgin and the Hyperloop high-speed transportation concept. The consultancy says that it has “used its learnings from our experience designing aircraft and train interiors to maximise the use of space and create flexible environments when designing the new rooms”.

The first Zip by Premier Inn will open in Roath, Cardiff in early 2019, when PriestmanGoode is expected to reveal full details about the design of the interiors. 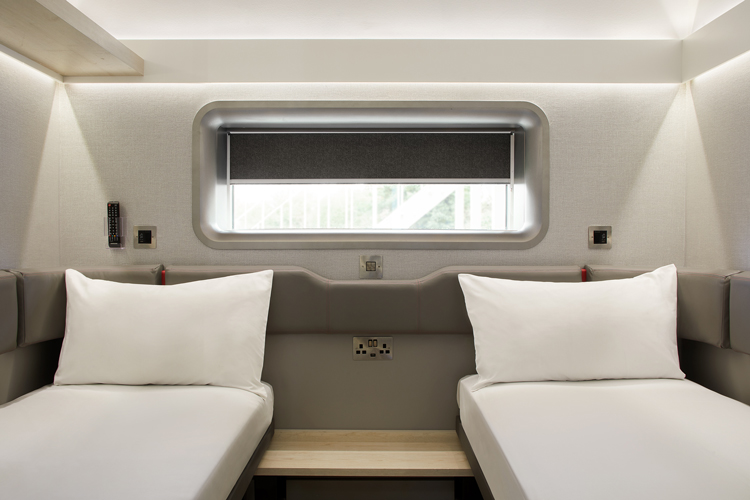