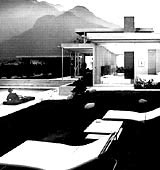 The Dundee by Design Awards 2000 display the winning competition entries from 28 February until 25 March. Dundee by Design is an organisation which promotes the economic benefits of all aspects of design, to business, primarily in the East of Scotland.

Unpublished work by Central Illustration Agency illustrators Mark Marston and Simon Spilsbury will show on 21 February from 6-11pm at Knocked Out & Unwanted. Marston recently worked on the Vodafone ad campaign and Spilsbury is working with the Central Office of Information Communications’ Teenage Pregnancy campaign.

Modernism: Home and Away, from 28 February until 24 April, examines three different ways in which the term modernism is interpreted, by architectural photographer Julius Shulman and architects Peter Aldington and David Chipperfield.

A collective of student artists from Duncan of Jordanstone College present a diverse exhibition of painting and sculpture, from 23 February until 9 March.