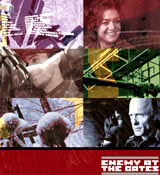 Fig Productions has created the title sequences for Jean-Jacques Annaud’s $90m (£60m) Second World War epic Enemy at the Gates, which is released on 16 March. Work on the film’s title design started last August. The end titles run for six-and-a-half minutes, claimed to be one of the longest closing sequences ever created, and use 10,000 frames. Created by Fig creative director and designer Richard Morrison, the titles use a bespoke typeface, designed by Dean Waresto, that emulates the Cyrillic alphabet.