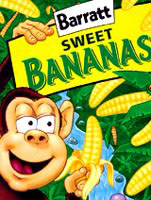 Design and branding agency Brand has redesigned Barratt’s eight-strong range of bagged sweets for children, which will launch towards the end of the month.

Brand senior designer Craig Webster refuses to name an exact fee for the job, but he confirms that the project has so far been worth “a six-figure sum”. He also says that Brand’s relationship with Barratt is set to continue with a redesign of the multi-product “adult box range”.

“The consultancy won the work on the strength of previous packaging projects,” according to Webster.

“The packs looked very dated and our job was to create a personality platform for the brand. It was also having an effect on sales, which were becoming very flat.”

The packaging is being rolled out nationwide this month, across eight products. Webster said that for each product in the range “we’ve adopted a character that relates to the product. So for Sweet Bananas we’ve used a monkey, for Candy Shrimps a fisherman, on Dinosaurs we’ve used a caveman and so on. But the branding and feel is consistent across the whole range.”

The adult range of sweets, which includes Mint Imperials and Midgit Gems, consists of 12 products with Brand due to be commissioned on the project “shortly”.

Webster comments that the redesigned adult range will probably be on sale in its new form late this summer. He also says Brand would be applying the same approach to the adult redesign as they have on the children’s sweets.

Barratt, a subsidiary of Trebor, manufactures its children’s and adult ranges in Chesterfield and is part of Cadbury Trebor Bassett.

Enterprise IG is big in Japan

Awards are not taking care of business-to-business