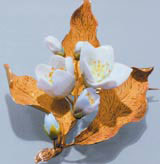 With marriage in decline and divorce rates high, a celebration of gold and silver wedding gifts might seem an anachronistic project. But one institution refusing to kowtow to this state of affairs is London’s Goldsmith’s Company, which safeguards the ancient skills of goldsmiths and silversmiths by arranging apprenticeships for today’s budding practitioners. The livery, which occupies a suitably opulent building in the City of London, is showcasing gold and silver gifts to brides, grooms and bridesmaids plucked from four decades: the 1890s, 1920s, 1960s and Noughties. ‘This way you can truly appreciate major changes in taste,’ explains curator Paul Dyson.

The show unearths some fascinating facts. Diamonds were every affluent Victorian dame’s best friend – a trend symptomatic of that era’s fascination with exotic, far-flung lands. ‘Big diamonds had been discovered in South Africa. Everyone wanted them,’ says Dyson. In the 1920s, before the arrival of the cultured variety, pearls were prized as status symbols, hence Queen Mary’s tier upon tier of pearl chokers. In the 1960s, heavy purchase tax on jewellery inhibited the production of gold and silver gems, driving many to buy antiques, although unapologetically Modernist designers Stuart Devlin and Wendy Ramshaw still produced strikingly futuristic pieces.

In the 1920s, a time of economic recovery after the First World War, jewellery was low key, claims Dyson: ‘Even the Queen Mother wore a simple tiara at her wedding.’ Not that the aristocracy really felt the pinch: Queen Mary’s pearls aside, the Duke of Marlborough, as bridegroom, received a silver gilt cup so lavish as to resemble the kind of flash sports trophy today’s footballer’s wives would kill for.

Interestingly, the Noughties pieces betray a barely suppressed anxiety that to succumb to marriage is to be conformist. How else to explain why they bend over backwards to flout convention? Typical of Noughties nuptials are skullcaps bristling with silver leaves – ideal for neo-pagan weddings in forest clearings, presumably – or medals picturing on one side a young couple embracing, on the flipside the same couple in middle age.

But The Goldsmith’s Company has remained optimistic that marriage isn’t yet under threat. For the show, it has commissioned 17 designers to create ingeniously off-the-wall silver and gold pieces which incorporate materials symbolic of different wedding anniversaries – from paper (first anniversary) through to china (20th anniversary). Forget cloying trinkets: Alex Bernard’s idiosyncratic paper anniversary confection is a pocket-sized silver watercolour box enclosing a water bottle, paints, brush and clip clasping a diminutive piece of paper.