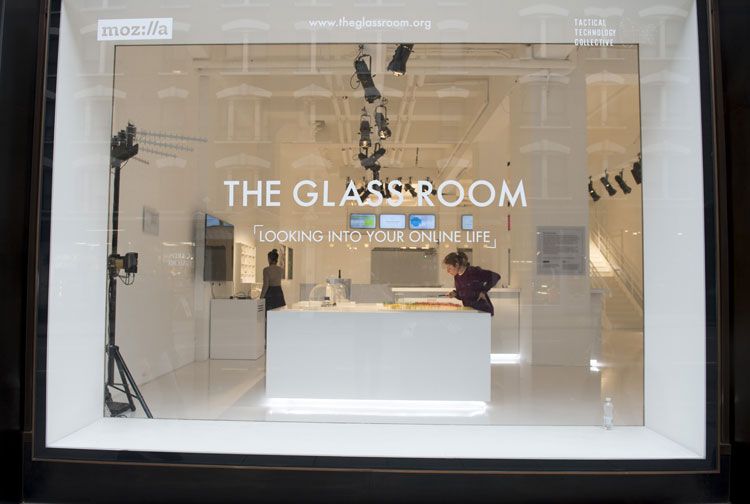 If you happen to be passing through Charing Cross Road area over the next few weeks, you may well notice a new face on the bustling, Central London high street. Tucked among its many shops, restaurants and theatre venues is a new pop-up with a brightly-lit storefront, reminiscent of one of Apple’s retail stores. Peer inside the shiny, enticing windows and you’ll see that the space is decked out entirely in white – even the staff are wandering around in head-to-toe white uniforms – and is filled with a multitude of screens, tablets and other devices.

Step foot inside however, and you’ll realise that you are not in the latest high-end tech store, nor an episode of dystopian TV drama Black Mirror for that matter, but you are in an immersive exhibition space where nothing is actually for sale. The brainchild of Berlin-based internet activists Tactical Tech and Mozilla, the non-profit that brought us web browser Firefox, The Glass Room is dedicated to unmasking the murky world of our personal data.

Initially brought to life as a pop-up exhibition in Manhattan, New York last December, the concept has now been brought across the pond to London, and will look to show the general public how our data is being freely harvested, traded and sold on a daily basis by everyone from big corporates to public bodies.

The name of the exhibition plays on the idea of “transparency”, says curator and Tactical Tech co-founder Stephanie Hankey, particularly in relation to the tech companies and digital platforms we give ourselves (and our data) over to every day. “The glass person is also a thing these days,” Hankey adds. “Meaning that we’re transparent in some way or another, because every aspect of our lives is data and habits.” 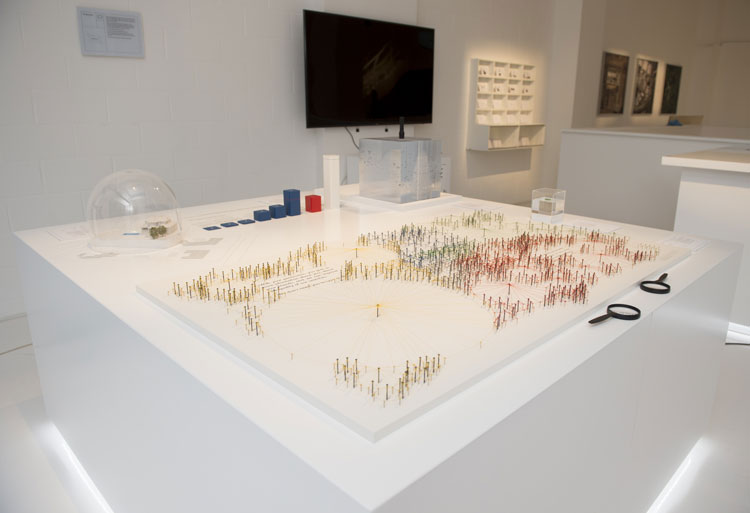 Meanwhile, the design aesthetic of the space takes cues from high-end tech stores such as Apple, as well as a 1980s advert for the now defunct internet provider CompuServe, which depicts two models donning white turtlenecks and standing next to a mocked-up image of a computer that today bears more of a resemblance to a microwave. “We were interested in taking an art exhibition – which has lots of things that can’t be touched – and instead putting things in the space so that it’s like a shop where there are people who talk to you, and pieces that can be interacted with,” says Hankey.

Featuring more than 40 different exhibits and artworks, the exhibition is divided up into four main themes: We Know You, Something to Hide, Big Mother and Open the Box. The first section, We Know You, offers an insight into “The Big Five” companies that we all likely interact with on a daily basis and have amassed huge amounts of our personal data – GAMAT (otherwise known as Google, Apple, Facebook, Amazon and Microsoft). The Alphabet Empire three-dimensional infographic for example, reveals the true extent of the influence of Google’s parent company, mapping its acquisitions and investments in areas as broad as genetics and artificial intelligence (AI) since it was founded in 1998. The Zuckerberg House exhibit plays on the idea there is one rule for us, and another for them. It sees a model replica of the Facebook founder’s California home complete with the four surrounding houses that he bought for over $30 million (£23 million) in order to maintain his privacy, after publicly claiming that privacy was no longer “a social norm” in the digital age, according to the exhibition organisers.

Exhibits in the rest of the space range from the playful (one piece shows how you can trick your Fitbit into generating fitness data without lifting a finger by clipping it to a metronome) to the thought-provoking (another exhibit suggests how scrolling through your Facebook feed is actually a form of “productive labour”, and prints out a receipt based on how long you’ve spent working for the social media company and the UK’s national minimum wage regulations.)

Then there’s the plain terrifying. One of the creepiest sections is Big Mother – a play on the slogan in George Orwell’s 1984 book that reads “Big Brother is watching you”. It features a number of white podiums with tablets on them that are playing promotional videos for real-life products, including one that shows how the United Nations Refugee Agency (UNHCR) has collaborated with a private company called IrisGuard to carry out iris scanning on more than 2.3 million Syrian refugees in Jordan so that they can withdraw money at banks without having to open an account, according to the BBC. What the video doesn’t reveal is that IrisGuard’s advisory board includes the former head of MI6 and the homeland security advisor to president George W. Bush, as well as how this sensitive information may be used for other purposes in the future, according to the exhibition organisers. 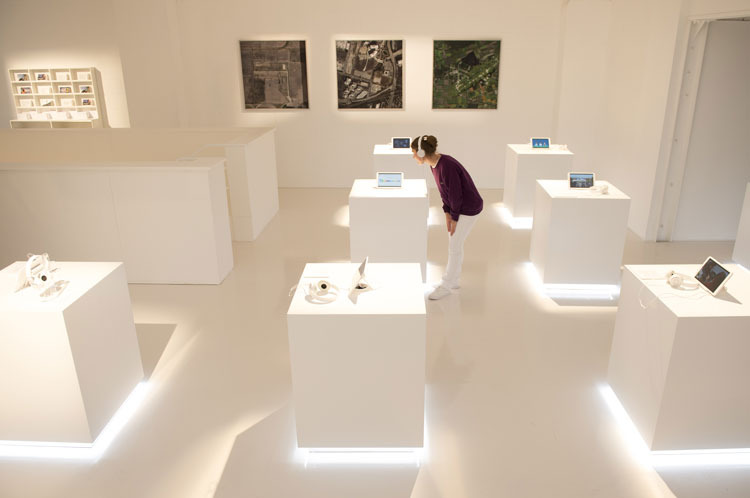 Another video shows a product called Silver Mother, which allows you to monitor your elderly relatives remotely by installing motion sensors everywhere from their pill bottles to their beds. “It provokes this reaction in people where they want this thing for their elderly parent, but they’re also kind of freaked out by it because it’s weird to track your own mother,” says Hankey. “We tried to pick pieces that provoke these really complex reactions, without saying it’s right or wrong, just getting you to think about it.”

If the sound of all this makes you want to immediately destroy all of your electronic devices, lock yourself in your house and wear a tinfoil hat for the rest of your days, fear not. The volunteer “ingeniuses” at the in-house Data Detox Bar are on hand to offer what Hankey calls “therapy” sessions and a series of free, hands-on workshops will be running throughout the course of the exhibition. Visitors can also take away a printed eight-day Data Detox Kit, which features friendly illustrations and gives practical, self-help style advice on how to take better control of their online lives. “We found that people can get freaked out about everything, so it’s a good way of giving them something to do,” says Hankey.

Most importantly, the exhibition is a means of making something as intangible – and quite often boring – as data much more accessible for people, so that they can learn how to better protect themselves from the potential risks of living out their entire lives online. “All of the things in here, people will have read something about at some point in the last few years, but I think there’s a massive ‘seeing is believing’ aspect to this,” says Hankey. “The visual language that we have for explaining something like privacy and security is really limited and blocks us from engaging with it, so we are trying to change this through design.”

The Glass Room runs until 12 November at 69-71 Charing Cross Road, London WC2H 0ND. Entry is free. For more information about the exhibition and workshops, head to the site. 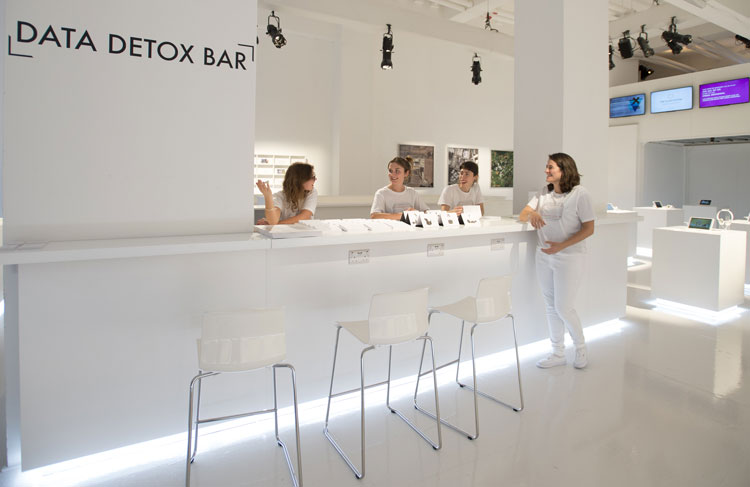 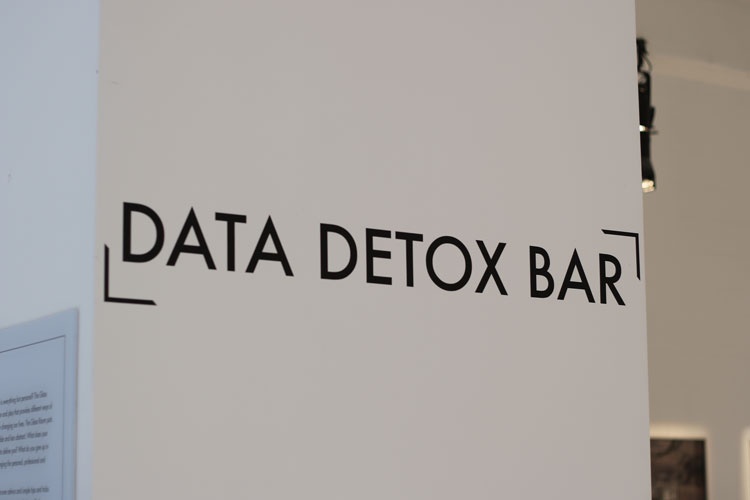 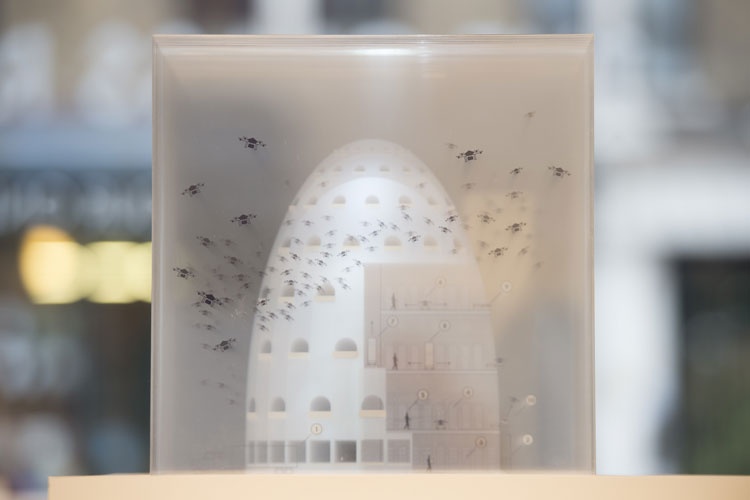 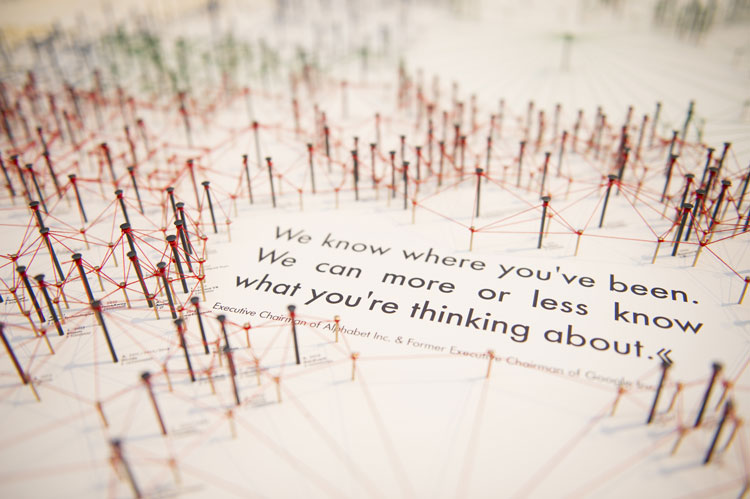 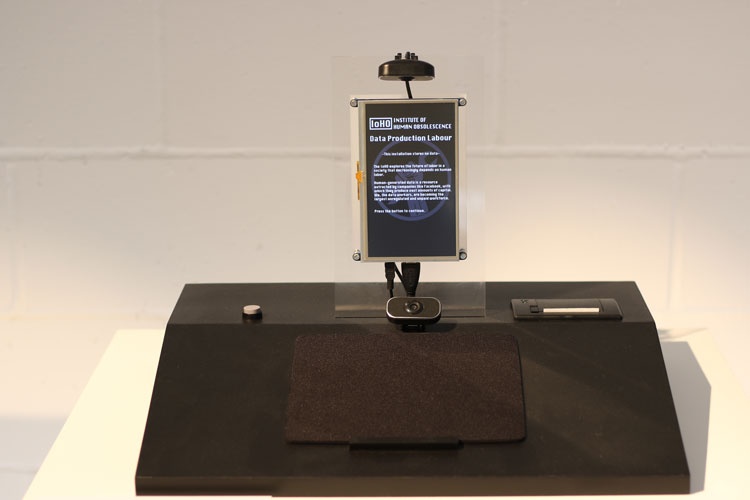 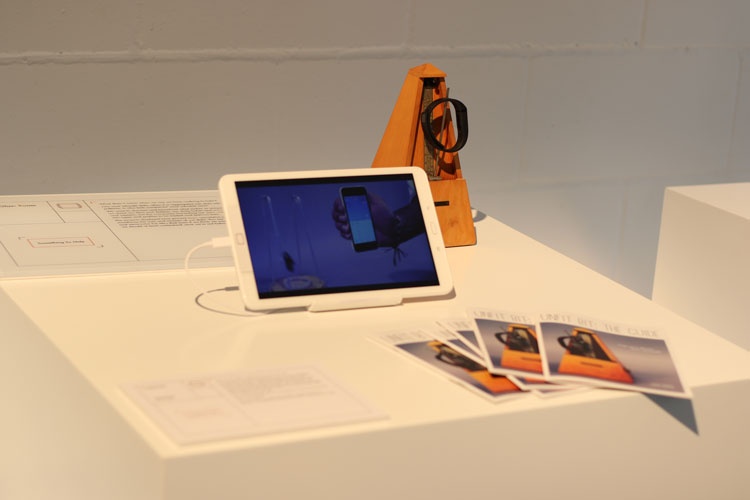 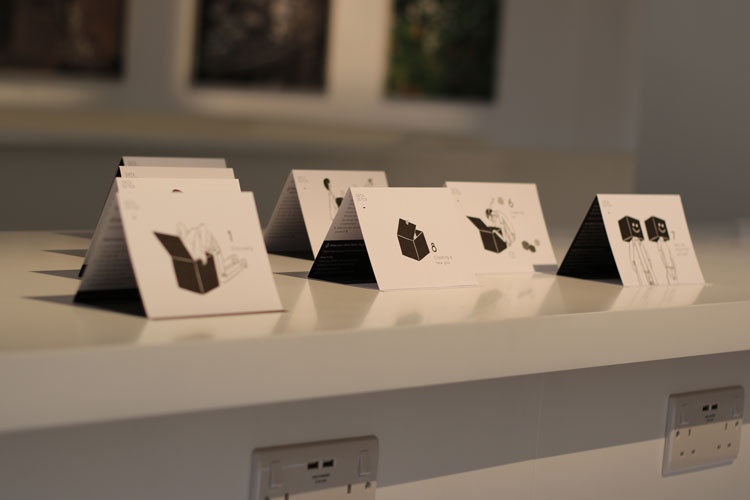 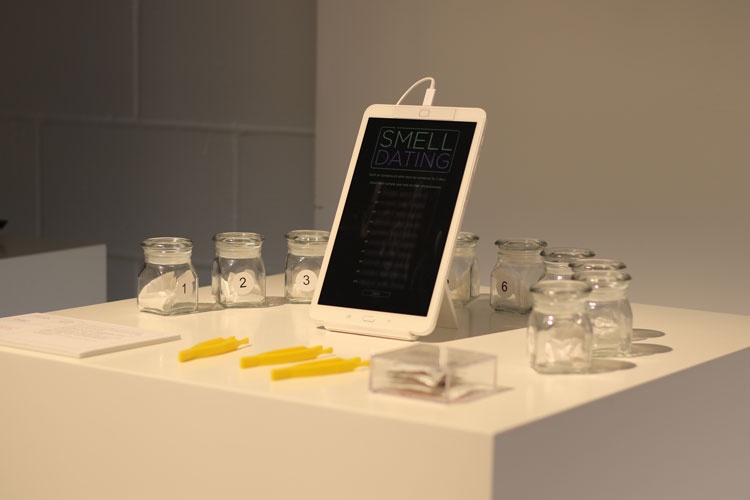 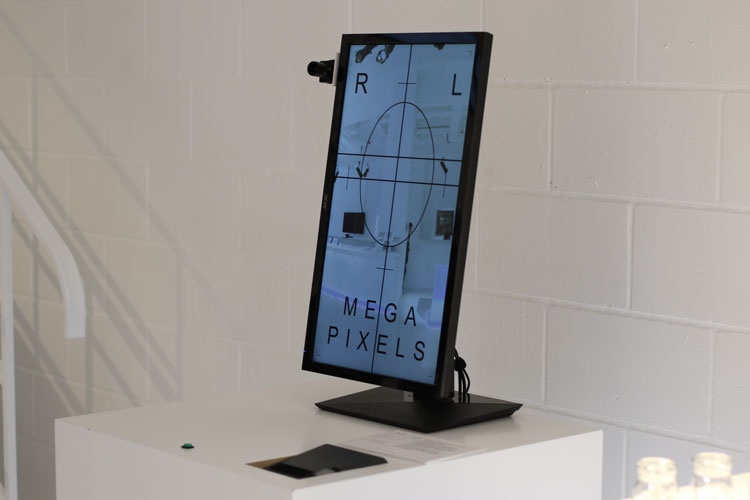 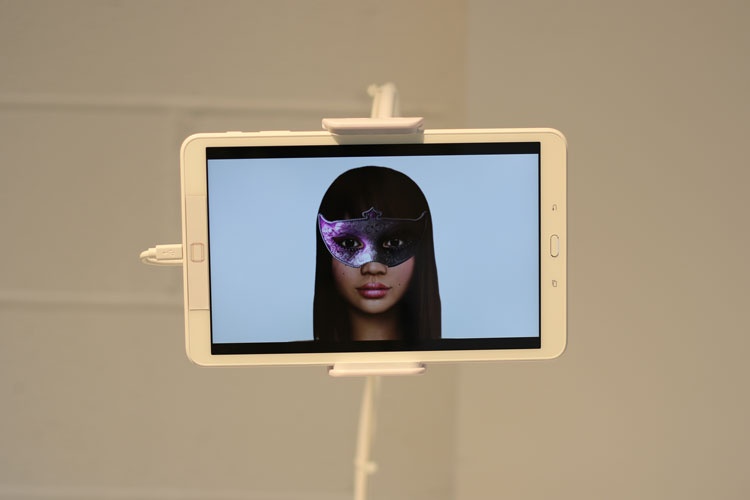