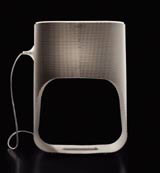 At the Satellite young designer Kazuhiro Yamanaka showed two round lamps that levitate like balloons when lit up. At the Luceplan stand, Ross Lovegrove showed the egg-shaped Goggle, a wall lamp with diffuser in opaline-moulded polycarbonate. Bubble shapes were omnipresent in Artemide’s vast stand, courtesy of the Castore range, by Michele De Lucchi and Huub Ubbens, and Through by Andrea Anastasio.

Among the impressive list of designers lending their talents to the manufacturer (Matali Crasset, Karim Rashid, Pearson Lloyd, Antonio Citterio and James Irvine to name a few), perhaps the most intriguing design in terms of technology was Bellatrix, by Carlotta de e e Bevilacqua, the Artemide brand strategy and development manager, and wife of owner Ernesto Gismondi. She is an architect by trade and was art director at Memphis in the late 1980s.

Bellatrix is a portable luminaire that emits chromatic light via dichroic filters and is also an acoustic diffuser that even purifies air with an integrated electrostatic filter. On the materials front, Artemide regular Enzo Mari’s lamps for the Tela Systems played with softness of form, the main feature of the range being a ring that grips the fabric allowing air to circulate and create appropriate safe distances from the source of light. Spanish Sante & Cole also displayed its signature admiration for clean lines and soft fabrics with MoarÃ© by Antoni Arola.

Disappointing was Flos – which attempted a theatrical approach with its black box and yellow signage stand design. Many of the products were boring and predictable and were not helped by being dwarfed by the almighty product stand.

However, Rodolfo Dordoni’s All light and Pochette are well designed technical fittings while Philippe Starck spiced up the Romeo light with a weaved multicoloured plastic cover. Decoration – both in lighting and in furniture – makes a firm comeback with more than one nod to the 1980s Memphis design movement. Heralding this maximalist mood was the Swarovski show with stunning chandeliers by Tom Dixon, Marcel Wanders, Studio Job, the Campana brothers and Tord Boontje.

Fontana Arte also had more frivolous designs like the Minimal chandelier lights by Marco Zanuso Jr and the S Vigilio lights by Matteo Thun, who chose to decorate some examples with lace. A touch of irony came from master Ingo Maurer, who showed a canned light, made of Campbell’s soup and a Campari light, embellished by bunches of clustered bottles – a tease for all those journalists who wanted to refresh themselves with a typical aprÃ©s-fair aperitivo.