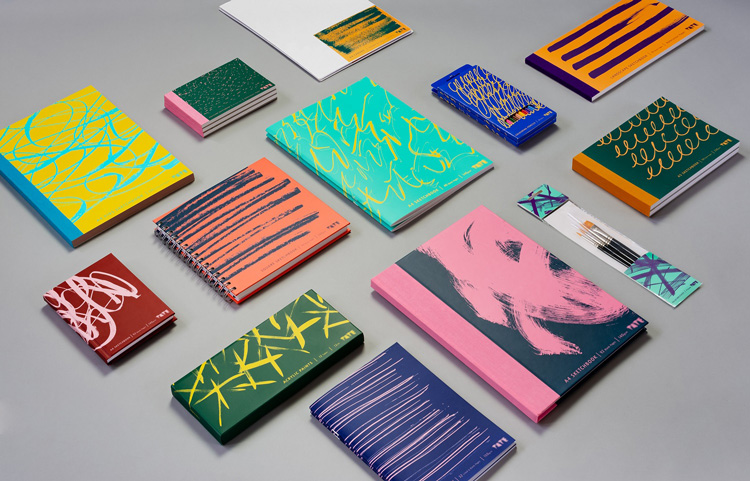 Here Design has created a new series of gift products, stationery and art materials for cultural institution the Tate, to be sold online and in all of its museums’ – Tate Modern, Tate Britain, Tate Liverpool and Tate St Ives – gift shops. The range includes nine sketchbooks, pencil cases, colouring and sketching pencils, acrylic paints, tote bags, t-shirts and art cases, which all incorporate a design inspired by artistic “mark-making”, says Here Design. The journal covers, for instance, feature a range of marks across their covers, such as paintbrush strokes, calligraphic-style pen script and more scratchy, messy interpretations. 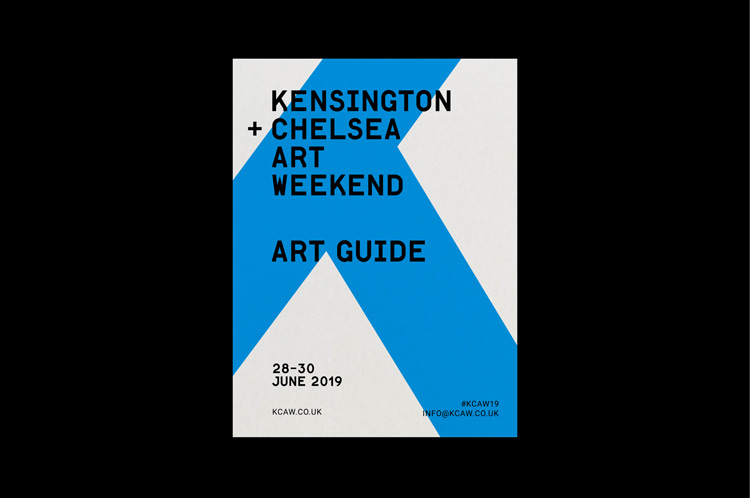 Art and cultural event, Kensington and Chelsea Art Weekend, takes place for the second time this year from 28-30 June, and will see three days of exhibitions and talks across galleries, design studios and museums. Its new brand identity, designed by AH-KB, is inspired by the punk heritage of the West London area, which centred around King’s Road in the 1970s. The identity features a bold, all-capitals logo, complemented by a shortened, acronym version of K-C-A-W, used alongside contrasting, bright colours and a slash graphic device. The studio says it has been inspired by the posters of punk band the Sex Pistols but looked to pare this style down to be more “contemporary”. 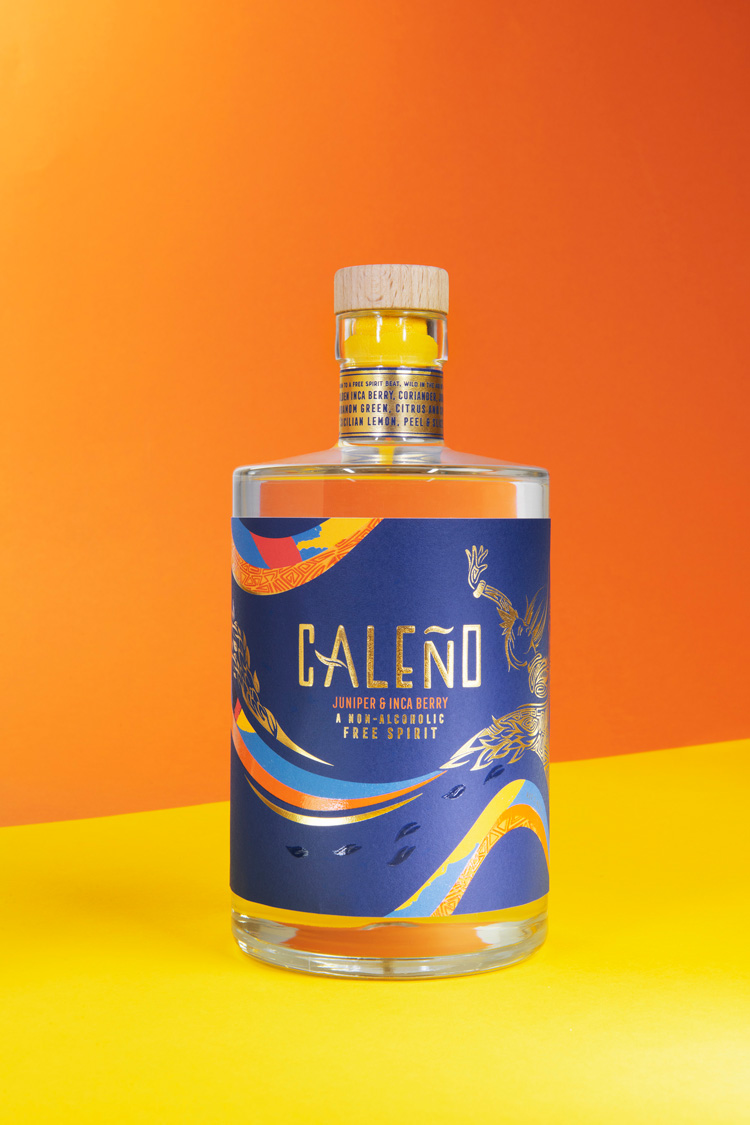 New, non-alcoholic spirt Caleño comes from Cali, Colombia, so Design Bridge has looked to incorporate design cues associated with the country into the product branding. The identity uses a palette of dark blue, light blue, orange and yellow, accented by gold. Inspired by Huitaca, a goddess of arts, dance, music (and sexual freedom) in Colombian folklore, the studio has interpreted her in the bottle design in gold. Other subtle details include the incorporation of feathers and owls, referencing the bird’s significance to Colombian mythology, as well as an embossed pattern around the rim of the bottle stopper, which replicates printing techniques used in the Incan Empire. This empire existed pre-Colombia and ruled in the 15th century.

Artist Di Mainstone has designed an interactive and multi-sensory installation at London’s Southbank Centre, which looks to delight adult and children alike and encourage them to explore sound, vision and touch. Soundpit is made of a giant sandpit, complemented by light displays, animated graphics and music, which change as visitors run their hands through the sand. The idea is that visitors become “the composers of their own masterpieces”, according to the cultural institution. The installation runs until 2 June.

The Polycade Project, by The Cade Museum 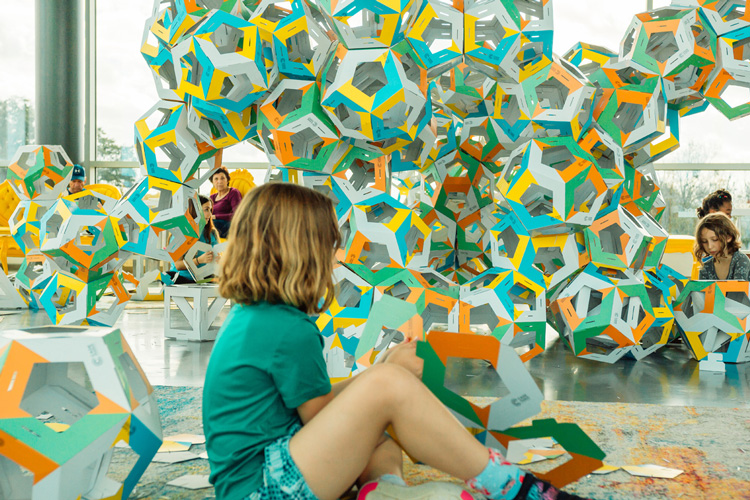 This three-dimensional (3D) architectural feat is entirely composed of paper, and is made up of hundreds of polyhedrons — a 3D shape with more than six sides — in a colour palette of yellow, orange, green, blue and white. Situated at The Cade Museum in Gainesville, Florida, US, the project explores the role that the distinctive shape plays across all disciplines, including how it appears in nature, and how it is used in maths, engineering, architecture, art and graphic design. Visitors are invited to distort and play with the installation, making their own geometric structures using the hundreds of polyhedron shapes, to encourage them to explore their imaginations and promote STEAM-based (science, technology, engineering, art and maths) learning. The installation runs until 1 March. 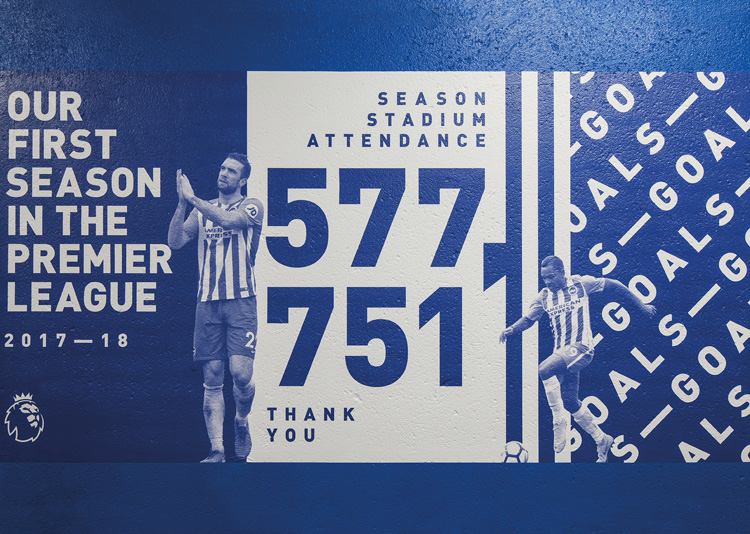 The Brighton-based football club has a new brand typeface and set of wall graphics for its East Stand concourse at the Amex, its home stadium in Brighton. The typeface, called Filthy Seagull Display, is a bold sans-serif set in the club colours of blue and white, and the wall graphics incorporate this type and palette. The walls take on different themes, with some visualising club chants and songs associated with the team, others showing statistics to do with the club’s past wins and some featuring quotes from fans, photography and a graphic history of crests from 1948 — 2011.

Rip It Off campaign, by Heist 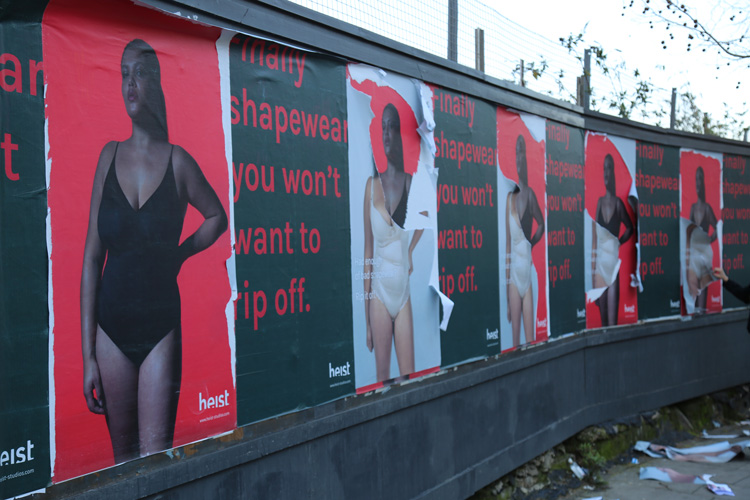 Heist is a London start-up tights brand, which is encouraging customers to “rip off” their restrictive spanx — body-shaping garments — with its new campaign. The brand frames itself as providing a product that is “breathable and comfortable”, so for this poster campaign it has spoken to hundreds of women and asked them to share personal stories about uncomfortable underwear. The print campaign, designed by Heist’s in-house team and installed by Jack Agency, will feature across 21 billboards in Shoreditch, East London, as well as in 105 tube and train stations. It is composed of photography of women, with the posters physically ripped to expose contrasting coloured garments underneath, with different lighting used to create this effect. To top off the fight against painful undies, Heist is also sending its own bodysuits to the first 250 people who send the company their old, “ugly and uncomfortable” spanx. 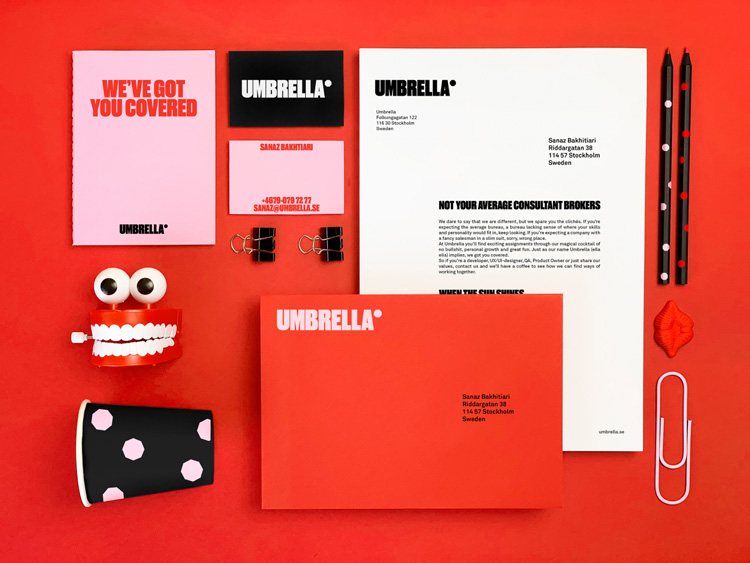 Sweden-based design studio Snask has created a “fun” brand for consultant broker firm Umbrella, which focuses on the design, digital and creative sectors, and freelancers. Consultant brokers work as an intermediary for businesses, helping them to sell their own companies or buy other companies, or in this case, helping freelancers connect with businesses. Snask has gone for a conflicting colour palette of red and pale pink, alongside a “bold and strong” primary, sans-serif typeface that appears skew-whiff in alignment and 3D, helping it pop out on screen or page. A suite of graphic icons has been used across the branding, including abstract “U” letters and umbrella shapes, as well as eclectic imagery and photography, such as workers’ tools, cocktail glasses and the Japanese “lucky cat” figurine. 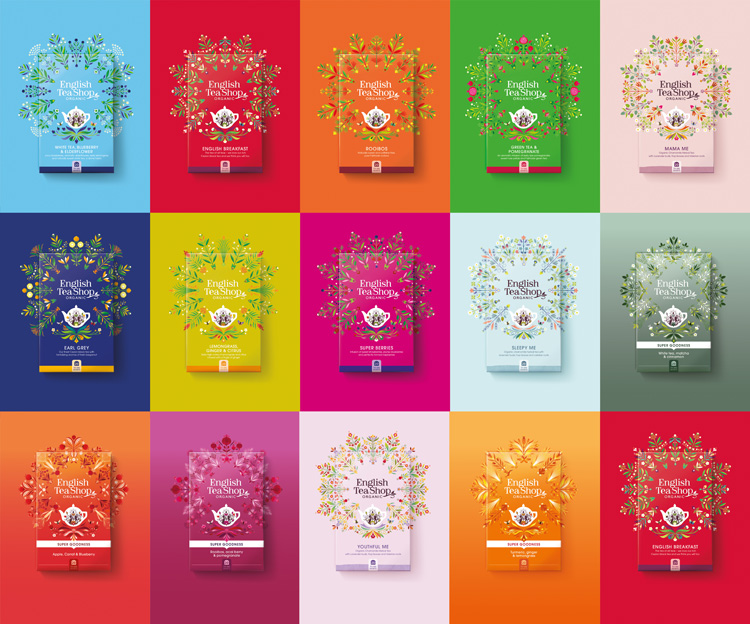 Tea brand, English Tea Shop, has a new, brighter look, which uses patterns to reference its connection with organic farms in Sri Lanka, where it has sourced ingredients since 2010. The new packaging sees a refined teapot icon, which is at the centre of the brand, the word “organic” now used in the name, and a set of mandala-inspired illustrations. The mandala is an intricate graphic symbol associated with Hinduisim and Buddhism, and has gone on to inspire a whole pattern style called mandala art. The teapot icon itself now includes mandala patterns, along with illustrations, while a refreshed colour palette aims to reference the “Sri Lankan tradition of celebrating colour in all its glory,” says Nigel Ritchie, creative director at Echo.

The Nordic Happiness Machine, by World of Tre and Made by Choice 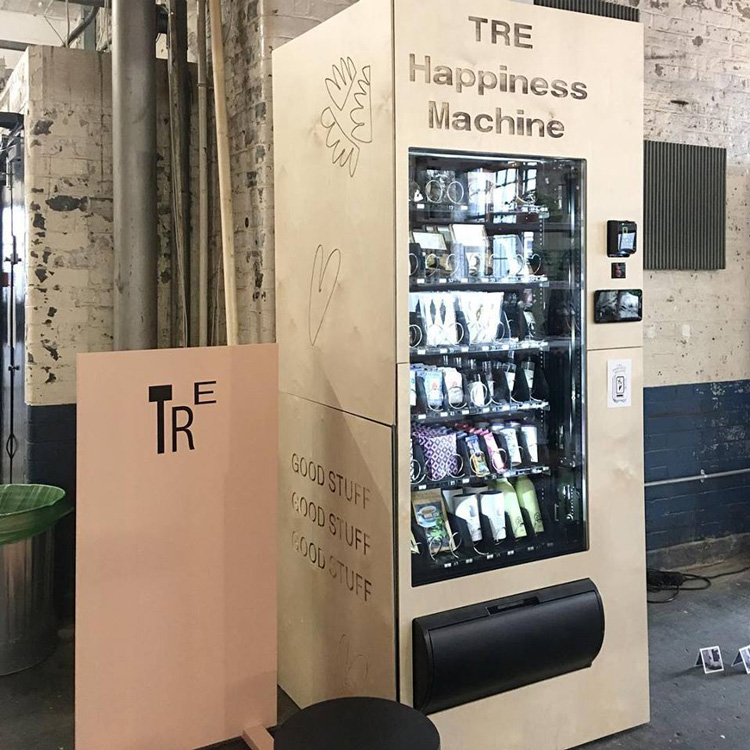 Finland-based design studio Made by Choice and lifestyle brand World of Tre have created a concept for a quirky vending machine which looks to expel happiness in the products it dishes out to its users. With hopes that hotels across Finland will install the contraption in the future, the vending machine “holds everything someone would need for a hotel sleep-over”, says Made by Choice. It has a range of food, drink, toiletries, pro-sustainability and designer products. Such eclectic items include a wooden and natural fibre hairbrush designed by Swedish retailer Iris Hantverk, a chocolate bar by sustainable brand Goodio, an organic beard oil called Risu, and a reusable menstrual cup called Lunette. While the products may look to instill joy, many have a less joyful price-tag, with some goods costing upwards of €70 (£59.90).