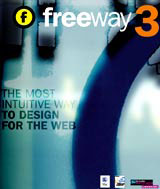 Torch Design has created a new corporate identity and branding for a Web design program created and developed at Oxford University.

The London consultancy was appointed following a two-way paid pitch in February and has designed all the packaging, literature, Web and CD material for Freeway 3, which is due to be relaunched tomorrow.

The program, originally established by SoftPress in 1993, competes head on with the likes of Go Live and Dreamweaver. It has attracted a worldwide cult following, by enabling website designers to produce highly creative sites without the need for complicated code. It is popular in Japan and the US and is widely used in the UK.

Torch creative director Peter Carroll says the new identity had to pay special attention to the broad range of people who use the innovative program.

‘As a branding task we were asked to create a signature look across all material that would appeal to creatives, but not in a typically tech-head sort of way,’ says Carroll. ‘A neat blend of colour fields and typographical shapes evokes a feeling of abstract expressionistic art. We applied variations of this imagery across box sleeves, manuals, CDs, brochures and the website.’